Can large advertising networks compete against the specialised digital boutiques?

Over the past few years, many specialised boutiques agencies have not only mastered the art of digital advertising but have also quietly taken away business from large ad networks. Large advertising networks are now making hurried acquisitions to step up their digital skills.

The bulk of the money lies in technology innovation and developing applications, and large networks do not have that expertise: Carlton D'silva <em>Photo: Nishikant Gamre/www.indiatodayimages.com</em>
Ajita Shashidhar
At the New Delhi Auto Expo in January 2012, a section of the crowd went hysterical seeing a cheetah sitting atop a Mahindra & Mahindra (M&M) XUV500 sportutility vehicle. The visitors stood next to the wild animal, patted it and clicked pictures. The cheetah, of course, wasn't real - the beast went extinct in India more than six decades ago. It was a virtual three-dimensional creation by digital marketing agency Hungama Digital for the auto maker as part of an augmented reality advertising campaign.

M&M put videos of the event on its YouTube channel, and got about 42,000 hits in just the first two days. There could not have been a better way of reaching out to the target audience, says Vivek Nayer, Chief Marketing Officer for the auto division at M&M. "While TV and print are great ways to connect with the masses, digital media helped us amplify the event online and we were able to interact with the audience interested in talking to us."

M&M is one of a growing number of Indian companies giving greater importance to digital advertising than the traditional kind, as more people use the Internet and shop online. But the auto maker hasn't yet completely shifted focus from print and television. While Hungama has the digital mandate for XUV500, the creative agency for traditional advertising is Interface Communications.

Isn't it better to appoint a single agency to deal with all forms of advertising? "That would have been the ideal situation," says Nayer. "But, as of today, the traditional agencies don't have the capabilities to offer integrated solutions."

Most large agencies dont have a planned digital approach. Often they have a childish approach to digital: Meera Sharath Chandra photo: Rachit Goswami
The predicament of advertisers like Nayer is prompting top ad agencies to enhance their digital footprint. The fastest way to do so is to acquire the specialists. No wonder, large ad networks have purchased nine boutique digital agencies in the past year. The big networks that have joined the takeover bandwagon include JWT, Leo Burnett, TBWA and Publicis Groupe. In March, IPG Mediabrands reportedly paid Rs 400 crore to buy online marketing agency Interactive Avenues. The latest to join the list is Dentsu. The Japanese ad giant's India unit on May 23 acquired an 80 per cent stake in Webchutney, one of the country's top digital agencies which has many high-profile clients such as Bharti Airtel, Microsoft and Unilever.

Missed Opportunities
Digital advertising in India is projected to grow at a rapid clip in coming years. According to a report by lobby group Federation of Indian Chambers of Commerce and Industry and consulting firm KPMG, digital advertising revenue is likely to quadruple by 2017 to Rs 8,720 crore from Rs 2,170 crore in 2012. The report, released in March, says the share of digital advertising in India's overall ad market will likely double to 14 per cent in 2017. Television and print ad revenue will grow at a slower pace during the same period. Boutique agencies have been quicker than large networks in reacting to the changing market dynamics. Over the past few years, many boutiques have not only mastered the art of digital advertising but have also quietly taken away business from large ad networks. Many industry experts see the recent spate of acquisitions as a desperate damagecontrol move by the big boys.

"Larger agencies had started losing business to specialised boutiques such as ours," says Atul Hegde, CEO of Mumbai-based Ignitee, which handles the digital business of auto maker Maruti Suzuki.

Rajiv Dingra, CEO of ad agency WATConsult, agrees with Hegde. "Had the agencies woken up on time they could not only have built up their capabilities organically but could have also won the client's faith," he says. WATConsult's clients include the diversified Godrej Group.

It handles the social media business of the Godrej master brand, Godrej Appliances and Godrej Tyson Foods. Executives at these boutiques say most large networks keep the digital business on the sidelines. Carlton D'Silva, Chief Creative Officer at Hungama Digital, says most large agencies have small digital teams which typically do "hygiene stuff" for clients. For instance, he explains, an agency handling the print or TV campaigns of a client may also put a small banner ad online. "The bulk of the money lies in technology innovation and developing applications, and large networks do not have that expertise," he says.

Rohit Ohri, Executive Chairman, Dentsu India Group, feels most large networks in India are too proud of their traditional creative skills and this prevents them from adapting to new market realities. Meera Sharath Chandra, founder of the start-up digital agency Tigress Tigress, is even more critical of the networks. "Most of them don't have a planned digital approach," she says. "Often they have a childish approach to digital." Top executives at large ad networks dismiss these arguments.

Srikant Sastri, Country Chair at VivaKi, says large networks are not late in entering the digital segment and they started expanding only when clients began demanding digital offerings. VivaKi is the Publicis Groupe company which has acquired digital agencies Resultrix, Convonix and Neev Information Technologies in the past year.

On the Offensive
Executives at large ad networks say even advertisers did not feel the need to think digital until recently. Pratap Bose, Chief Operating Officer at ad network DDB Mudra, argues that most clients don't know much about online advertising and spend on digital only because it is fashionable to do so. Madhukar Sabnavis, Vice Chairman at Ogilvy & Mather India, says apart from a handful of its clients such as telecom operator Vodafone, computer maker Lenovo and technology giant IBM, others have not yet asked for integrated solutions. 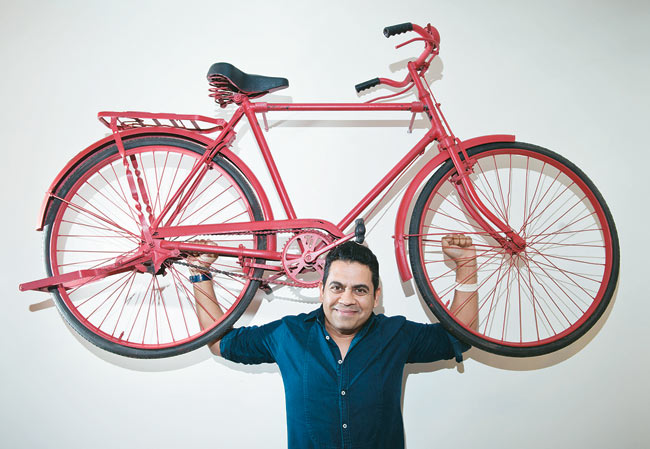 The difference between digital and traditional will blur and you will fi nd a single team offering all services: Shiv Sethuraman Photo: Rachit Goswami
Big networks also rubbish the argument that their top executives Executives at large ad networks say even advertisers did not feel the need to think digital until recently. Pratap Bose, Chief Operating Officer at ad network DDB Mudra, argues that most clients don't know much about online advertising and spend on digital only because it is fashionable to do so. Madhukar Sabnavis, Vice Chairman at Ogilvy & Mather India, says apart from a handful of its clients such as telecom operator Vodafone, computer maker Lenovo and technology giant IBM, others have not yet asked for integrated solutions.

Big networks also rubbish the argument that their top executives, being in their fifties and sixties, are too old to learn new skills. Industry veteran M.G. Parameswaran, CEO of DraftFCB Ulka, recalls that when he started his career more than three decades ago, advertising was all about selling space in newspapers. Ad agencies changed themselves when radio and TV advertising grew, and they will adapt again when digital becomes important, he says.

Network executives argue that most boutique agencies have set up shop only to be bought out. They say these agencies are under-pricing services to gain market share and boost their valuation before selling stakes. Madan Sanglikar, Co-founder and Managing Director of mobile advertising company ad2c, differs. He says the specialists are more transparent in pricing while the big networks have higher overheads. The networks will soon start offering "the right pricing" to stay competitive, he adds. 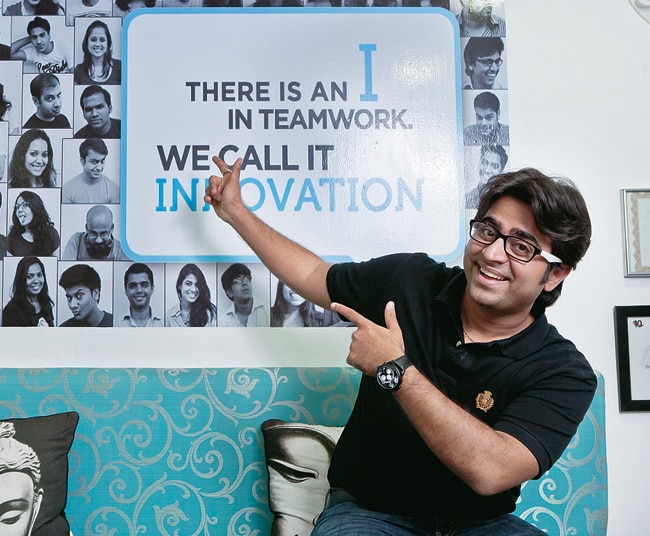 Had the big agencies woken up on time they could not only have built up their capabilities organically but could have also won the clients' faith: Rajiv Dingra
Acquiring boutiques may be the fastest way to grow, but is it the best option? Indian ad agencies have not had the best of experiences with acquisitions. A classic example is that of Bates. The agency went through three mergers. The first was with Clarion in 1999, followed by the acquisition of Enterprise in 2005. In 2007, Ogilvy group agency David was merged with Bates. All the mergers failed. Sanglikar of ad2c says these did not work because the companies had similar skill sets. The recent acquisitions of boutiques will work because large networks do not have digital skills, he adds.

Acquisition Challenges
The challenge with most acquisitions will be to integrate the digital teams with the mainstream, says Sunil Gupta, who heads the South Asia region at Results International, an advisory firm specialising in acquisitions in new media and marketing communication sectors.

The bigger challenge for networks will be to get the mainstream team to think digital. The boutiques, too, will have to build expertise across all verticals in the digital space to have a long-term relationship with clients, says Preetesh Chauhan, Vice President for South Asia at mobile video advertising company Vdopia. So, what does the future hold for Indian advertising? A decade from now, say experts, the Indian ad industry will be quite similar to that of the US and UK, where digital spends make up as much as 30 per cent of overall expenditure.

But TV and print advertising in India will not fade away anytime soon. "I was told that the 30-second commercial would be passe way back in 1997. But it is very much there even today," says Parameswaran of DraftFCB.

The future will be one of integrated services. "The difference between digital and traditional will blur and you will find a single team offering all services," says Shiv Sethuraman, CEO of TBWA India.

And despite the recent acquisitions, boutiques and networks will continue to co-exist. As the networks upgrade their digital expertise, the current set of specialised services will become general. "A new set of specialised skills will emerge," says Sanglikar of ad2c. "That will lead to the emergence of newer boutiques."