With tax collections likely to fall short of targets, disinvestment receipts will be key to keeping the govt's fiscal deficit under control. Also, achieving the target of raising Rs 30,000 crore in 2012/13 through stake sales will establish the govt's willingness to push through reforms.

On October 8, Finance Minister P. Chidambaram underscored the government's commitment to meeting the target of raising Rs 30,000 crore in 2012/13 through stake sales in state-run companies. "We have lined up all disinvestment cases for the next six months," he said at the Economic Editors' Conference in New Delhi. But he added a caveat. "There is a time table, but this could change depending on market conditions."

ARCHIVE: How rising fiscal deficit is harming the economy

This was not the first time the government had laid emphasis on meeting the disinvestment target. On September 14, the day the government allowed foreign direct investment in multi-brand retail, the cabinet also cleared stake sales in Oil India, National Aluminium Company, Hindustan Copper, and trading firm MMTC. The cabinet had previously cleared stake sales in Steel Authority of India Ltd and Rashtriya Ispat Nigam Ltd (RINL). There are two main reasons why the government is keen on disinvestment. One, achieving the target will establish the government's ability and willingness to push through reforms. Two, the money raised from stake sales will help to keep the fiscal deficit under control . The government had set the fiscal deficit target at 5.1 per cent of gross domestic product for the year ending March, 2013. Policy watchers and economists, however, say that meeting the aim would be difficult. The finance ministry now hopes to contain the deficit at 5.3 per cent. Meanwhile, the Vijay Kelkar committee on fiscal consolidation, appointed by Chidambaram, has said in its recent report that the gap may widen to 6.1 per cent if "immediate mid-year corrective actions are not taken".

The government had set its fiscal deficit target assuming that the economy would grow 7.5 per cent this fiscal year. But the economy is now widely expected to expand between five and six per cent only, raising the possibility of the government missing other revenue-earning goals. Directtax revenue for the April-to-September period grew just 5.9 per cent, less than the budget estimate of about 15 per cent for the full year. Indirect tax collections, targeted to rise 27 per cent this fiscal year, have also been slower than expected in the six months through September. We have lined up all disinvestment cases for the next six months: P. Chidamabaram
The government has indicated it wants to control spending and meet its non-tax revenue goals. It has kept the market borrowing aim for the October to March period unchanged at Rs 2 trillion (one trillion is 100,000 crore). Besides disinvestment, the other major non-tax revenue source is telecom spectrum auctions. The government aims to raise about Rs 40,000 crore via auctions.

The recent increase in diesel prices and the decision to impose a limit on the number of subsidised cooking-gas cylinders per consumer will help lower subsidies and, as a result, government spending. But economists say this is not enough.

The Kelkar Committee report says the government should also sell its minority stakes in companies such as Hindustan Zinc and Bharat Aluminium where it has already sold its majority holding. "There is practically no economic or strategic rationale for holding on to these minority shareholdings in companies which are essentially privately owned," it says. N. R. Bhanumurthy, Professor, National Institute of Public Finance and Policy, says stake sales in these alone could take care of a large chunk of the divestment target. 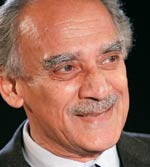 They (UPA) are prisoners of their own shouting... The defi cit is a big black hole: Arun Shourie
Arun Shourie, who led an aggressive disinvestment programme as minister in the Bharatiya Janata Party-led National Democratic Alliance government, is not impressed by the likelihood of minority shares being divested. Discussing the government's policy of not selling majority stakes in companies that could further incentivise investors, he says: "They (the ruling United Progressive Alliance) are prisoners of their own shouting, The aim is to sell minority stakes and fund the fiscal deficit. The deficit is a big black hole. The process does nothing to change the character of the company." He adds that there is never a right or wrong time to sell shares. "The public will respond if it feels this is part of a larger reform process," he says.

Will the government achieve its target? The task is challenging. The share auction of Oil and Natural Gas Corporation (ONGC) early this year, received a poor response. Life Insurance Corporation reportedly bailed out ONGC by buying 88 per cent of the stake offered. On October 9, the initial public offering of RINL was deferred due to pricing concerns voiced by the steel ministry.

The government has failed to meet the target of mobilising Rs 40,000 crore per year from stake sales in the two previous financial years. So far this year it has raised just Rs 125 crore, through a stake sale in National Buildings Construction Corporation. The Kelkar Committee cautions that, if no policy interventions are made, disinvestment receipts will be around Rs 10,000 crore only this fiscal year. That leaves little choice but to get the disinvestment strategy right.
Published on: Oct 29, 2012, 12:00 AM IST
Posted by: Navneeta N, Oct 29, 2012, 12:00 AM IST