News
Magazine
Features
DogSpot.in gearing up to make a splash in pet products

DogSpot.in gearing up to make a splash in pet products

The pet products market may still be small, but fresh infusion of funds in the company from Ratan Tata may make a big difference.

The son of a Professor of Veterinary Sciences, Rana Atheya had become a pet expert by the time he was a young man, picking up details about domesticated animals from his father. But in pursuit of his engineering degree from MJP Rohilkhand University, Uttar Pradesh, and later an MBA from Coventry University, UK, the dog-lover in him waited in the wings only to reappear as a blogger on his pet subject - how to adopt animals, train them and what to feed them.

Finally, in 2007, the trigger to migrate from BlogSpot.com to DogSpot.in came from a friend. "Why blogspot; why not dogspot?," the friend had quipped. There was no looking back since then. He bought the domain name, DogSpot.in, and started populating it with content on weekends, while he still kept his job. The response was encouraging.

In 2011, he teamed up with childhood friend Ankur Tandon, the Chief of Operations at DogSpot, and Shalesh Visen, who owned a web solutions company (now the Chief Technology Officer, DogSpot), to launch e-commerce services on DogSpot.in. "Content and community existed; we added another C -commerce," says Atheya. But, no one was willing to invest as the pet products category was almost non-existent. The three friends pooled in Rs 2 lakh and hired an intern to run the e-commerce venture under PetsGlam Services. "We decided to do it on our own to prove that there is a market for it and that it can be profitable," he adds. 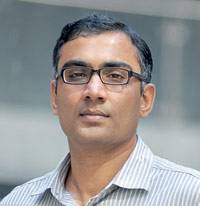 "We did invest ahead of the curve in this company. But that only means we will make money in six years instead of three, which is fi ne with us"

DogSpot.in caught the fancy of pet lovers and pet owners as it provided them an interactive and informative platform. "You can buy normal dog food at any store. We cater to the special needs of a family member - your dog. That's why we have a community and content around pets. It is not like a grocery vertical; it is a super-specialised vertical and not just commerce," Atheya asserts.

Within one year, the company got its first round of funding from friends and family - a princely sum of Rs 50 lakh. "Since we were starting a new category and no one had bought dog food online, we had to invest in inventory," Atheya says. Even then, there was resistance from all quarters - from logistics partners to payment gateways. Barely one year later, India Quotient invested `1 crore in DogSpot. In 2014, it attracted investments from Unilazer Ventures, promoted by Ronnie Screwvala, and GrowthStory's K. Ganesh, followed by a second round of funding by India Quotient. By December 2015, it claims to have raised a little over $1 million (approximately `6.68 crore). In January 2016, the Chairman Emeritus of Tata Sons, Ratan Tata, invested an undisclosed amount in DogSpot in his personal capacity. Knowing Tata's passion for start-ups and love for dogs, Atheya merely tried his luck by contacting him through R. Venkat, a close associate of Tata, on e-mail, and it paid off. Other investors in this round were Dheeraj Jain and Ashok Mittal.

Investors vouch for Atheya's conviction and dedication to the pet products business. "I wouldn't have invested in this company if it wasn't for Rana," says Anand Lunia, Founder-Partner, India Quotient. Besides, he believes, India is seeing a pet population explosion - 10-15 per cent growth every year. He attributes this to late marriages, early retirement and increasing number of families with a single child, which makes a case for a companion or friend. Rising incomes and bigger houses, too, make it conducive for middle-class families to adopt a pet. "When the pet becomes the child's friend, he becomes a baby. People are willing to spend to feed and groom them well," says Lunia.

It is not surprising then that several players, such as Pupkart, PetShop18, Petsworld and Heads Up For Tails (HUFT), have mushroomed in the past few years. Several online marketplaces, such as Amazon, Indiamart, Flipkart, Snapdeal and Big Basket, too, are selling pet products. Atheya considers HUFT, which was launched around the same time as DogSpot.in, to be a serious competitor. 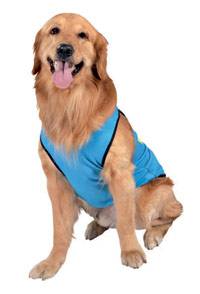 Six months ago, DogSpot launched its own line of products. "We were earlier looking to be a traditional e-commerce marketplace, aiming at growth on the GMV (gross merchandise value) side. We were growing 20-30 per cent month-on-month. But looking at how the e-commerce landscape has changed over the past year, I realised that we need to have a sustainable business model," says Atheya. He believes that this is a great opportunity to build brand DogSpot, and sustain the company with competitive pricing and better margins. The company's contribution margins have risen from 4 per cent to 20 per cent in the past six months, he claims.

Today, the site hosts 3,000-plus products from across 170 brands. The company earns four times the margin from its own label compared to other brands. It has launched products across 12 categories, including biscuits and treats, supplements, grooming, bowls and feeders, collars and leashes, t-shirts, mats, toys, etc. Experts are roped in from across verticals in the pet products categories to make high-standard and niche products (such as shampoos specific to dog breeds, based on their hair length and texture) and it conducts field tests among its dog-owning employees. "We even taste all the biscuits," adds Atheya. He believes his company has an upper hand because it can alter and re-launch a product based on feedback from its community.

"There are no known brands in this space apart from Pedigree. With the credibility and critical mass we have gathered, we are creating barriers so that no horizontal player can enter this space. We are making habit-forming products of high standard and high quality to become the super specialist that pet owners seek," he says. It is retailing products through online marketplaces, pet shops and veterinary clinics, though its own site drives maximum sales. The home-based pet boarding and grooming facility that his wife Vizal runs in Gurgaon, called PetSpot, also houses its products.

DogSpot, which has a team of 20, does not have a manufacturing unit of its own. It hires contract manufacturers for its private labels and ships products from its 5,000 sq. ft warehouse in Gurgaon, which doubles up as its office. Atheya says the website gets around 20,000 unique visits and the company ships around 200 orders per day. On average, customers make monthly purchases worth Rs 2,000-3,000. DogSpot also runs a customer care service with the help of an expert to solve pet owners' queries and facilitate adoptions. It has tied up with NGOs, such as Friendicoes, SPCA and Precious Paws to run fundraising events, adoptions and donations. Till date, it hasn't invested in marketing the site or products, but is active on Facebook. The company broke even six months ago, after having burnt a lot of money till July 2015.

The new round of funding has added a spring in Atheya's step. From the existing 300 under the private label, he plans to have 1,500 products in a year. The focus will be on repeat buying categories, including treats, biscuits and shampoos. After launching an economical range earlier, DogSpot is now focusing on a premium range by entering into exclusive partnerships with brands such as Petmate for travel kennels, FURminator for specialised grooming products, and Spotty for in-home toilet training products. The company clocked revenues of around Rs 6 crore (source: Ministry of Corporate Affairs) in 2014/15, and aims to double it in 2015/16.

The pet products market, Atheya estimates, is worth Rs 2,000 crore today, expected to grow at 30-40 per cent per year. Lunia says investor interest is still not very high in this category, but is confident that newer players will come in. "We did invest ahead of the curve in this company. But that only means we will make money in six years instead of three, which is fine with us," he says. According to TechSci Research, the pet food market in India will cross $270 million by 2019.

This category is certainly not going to the dogs.