News
Magazine
Features
Table for All

"EazyDiner was set up to solve one key problem: to help diners make reservations at restaurants, and for restaurants to be able to offer and take bookings," says Deepak I. Shahdadpuri, Founder & Managing Director, DSG Consumer Partners, an investor in the company.

Number of restaurants on platform: 1,400+

This writer's day-old resolve at beer control ended with a tempting notification on a hot Tuesday evening. "If you are a foodie, you'll go over the moon with the deals," prodded online restaurant reservation start-up EazyDiner's app. There was 10 per cent off on a meal at Oh! Calcutta in Delhi's Nehru Place; a 15 per cent discount on the food bill at The Chatter House; a free mug of tap beer at Beeryani in Greater Kailash; a free dessert at the Italian restaurant, Diva. Further, Urban Pind, "one of the few casual restaurants where the food is as good as the drinks", was offering a 20 per cent discount on both food and booze.

As the taste buds beckoned, the writer reserved a table through the app, guzzled beer, ate Zaituni Tikka, and watched a group of social dancers practise salsa amid near deafening music.

Urban Pind's floors were deserted at 8.30 pm when the table was reserved. It did get populated, though, much later in the night. But, EazyDiner managed two things - one, helped in the restaurant's discovery and two, generated demand when there was excess capacity.

That was one of the ideas behind EazyDiner. While it was incorporated in 2014, its website went live in January 2015 - a time when all sorts of food-tech start-ups bloomed, raised capital, expanded in multiple cities, pushed app downloads, and burnt venture money fast delivering food at steep discounts. EazyDiner, modelled around OpenTable of the US, aimed to do the opposite. It wanted to get people to visit restaurants.

On average, about 20 per cent of the seats in a restaurant go vacant daily. On weekdays, this number shoots up to 50-55 per cent, says Co-founder and Chief Operating Officer of EazyDiner, Rohit Dasgupta. There was a clear need in the market that the company tried to plug. Of course, the food and beverage pie is large, pegged at about $48 billion. The dine-out market is comparatively small. While Indians dine out less than twice a month, Indonesians eat out 15 times a month, Singaporeans 40 times and the Chinese, 60 times. A higher disposable income is expected to boost the appetite for dining out in India, and EazyDiner fancies riding on this trend.

"EazyDiner was set up to solve one key problem: to help diners make reservations at restaurants, and for restaurants to be able to offer and take bookings," says Deepak I. Shahdadpuri, Founder & Managing Director, DSG Consumer Partners, an investor in the company. "This business model is an established one globally among leading companies including OpenTable, LaFourchette (acquired by TripAdvisor), Dimmi (acquired by TripAdvisor), Chope and Quandoo. The millennial consumer is demanding a seamless digital experience. Given that there was no one offering real-time restaurant reservations in India, I worked with Vir Sanghvi and Rohit to start EazyDiner," Shahdadpuri adds.

Apart from Sanghvi, a journalist and well-regarded food critic, who brought in content expertise, the founding team comprised a blend of executives from the hospitality industry. Dasgupta was a General Manager with Oberoi Hotels & Resorts in his last role; Co-founder Shruti Kaul, Vice President marketing, has over a decade's experience at hotels, while Sachin Pabreja, Vice President of operations, held leadership positions with hotels such as Grand Hyatt, The Imperial and The Claridges, New Delhi. Ruchika Dhamija, Chief Product Officer, and Manish Kutaula, technology head, complete the founding team. It was, perhaps, the experience of the founding team that helped the company opt for slow and steady growth, over a super-fast, cash-guzzling model.

By the end of 2015, the food-tech world resembled a burnt toast. Here's a re-cap: Restaurant aggregator TinyOwl scaled back operations in many cities and fired employees. Zomato and Foodpanda let go of at least 300 people each. In Bangalore, food-tech firm Dazo shut shop. SpoonJoy, a company with investors such as Sachin Bansal and the backing of SAIF Partners, got sold to hyper-local grocery and fresh-food delivery company Grofers. Most venture capitalists switched off from the sector.

Nevertheless, EazyDiner, with an overall funding of $4 million from DSG Consumer Partners and Saama Capital, managed to sail through. It currently has 1,400 restaurants on its platform in five cities - Delhi, Pune, Mumbai, Bangalore and Chennai, and has, thus far, reserved tables for 1,26, 000 diners. Revenues are flowing. It made close to Rs 1 crore in May 2016 and achieved an operational break-even in Delhi, its first market.

Multiple revenue streams were built into the business model. Restaurants advertise on EazyDiner as also pay for every diner who books and dines. Currently, the start-up charges Rs 150 from five-star restaurants for every diner and Rs 75 from a standalone restaurant. The bulk of its current revenues, however, is generated through advertising. A third revenue stream will open up soon. The company is integrating cashless payments - it would handle the billing process for restaurants and a percentage would be charged as fees. 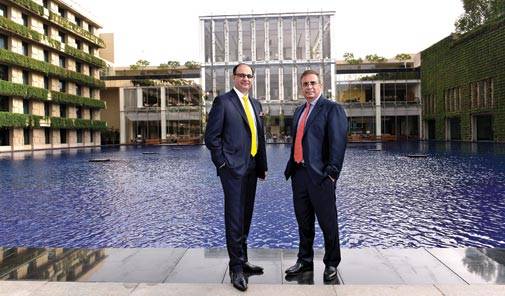 The business became less cash-sucking because it did not discount meals. Instead, the company persuaded restaurants to dole out freebies, called 'meal enhancers', to attract diners. "Not a single deal for a meal enhancer is funded by EazyDiner," Dasgupta asserts. This appears to be working for restaurants in some cases, leading to higher sales. Kapil Chopra, President of The Oberoi Group and a board member at EazyDiner, says that 72 per cent of the people who get a glass of wine free when booking through EazyDiner order a second glass. "This is not only at The Oberoi and Trident Hotel, but an overall average across restaurants," he informs. Close to 2,000 diners come to different restaurants at The Oberoi and Trident Hotels every month through EazyDiner, and this number is growing at 30 per cent every month, the hotel says.

The Claridges in New Delhi views EazyDiner as a marketing tool. Its "sweetened" deals attract people who wouldn't have otherwise dined at a five-star restaurant, says Simran Kodesia, Associate Director, Marketing at the hotel.

There is competition brewing. Dineout, a similar table reservation service, appears to be the largest in the space going by the number of listings and cities. According to data on its website, it currently seats more than 100,000 diners across 2,000 restaurants in eight cities per month. The bigger fish is restaurant discovery platform Zomato which, in November 2015, launched Zomato Book, its table reservation product. The company, India's only food-tech unicorn, says it has currently partnered with over 300 restaurants - in Delhi, Mumbai and Bangalore.

Nevertheless, EazyDiner has one differentiation it loves to flaunt. While Zomato relies on user reviews of restaurants - that could lead to soured ties with restaurateurs who feel targeted by the less-ethical bloggers - EazyDiner hires experienced critics for 100-word reviews.

It could take a year before a clear winner emerges in this tussle between user-generated content and the critic-written one. EazyDiner, meanwhile, appears focused on expanding the number of cities it operates in. The start-up is going international, too - Dubai will be its first test. A bigger test in India will be getting on board smaller restaurants in what is largely an unstructured market. Another question looms large: are "deal enhancers" a viable option for the smaller guys?

Riyaaz Amlani, CEO and Managing Director of Impresario Entertainment & Hospitality, says platforms that attract diners through deals can be detrimental to the industry over the long term. "That's because people will get used to discounts and become deal hunters. They would not prefer quality and this will hurt the profit margins of restaurants even more," he says. As of now, 40 of his restaurants are on EazyDiner. In some, he offers a free dessert. Sweet endings are always welcome.