Indian politicians of all hues are taking to new media because the general election is less than a year away. A report by IRIS Knowledge Foundation and The Internet and Mobile Association of India released in April expects social media to play a big role in the 2014 elections.

Goutam Das
A year ago, about four million people waited patiently for nearly an hour for Google to fix its systems. An avalanche of web traffic had nearly crashed the Internet giant's well-advertised plans for the evening. But Google's guest for the night, Gujarat Chief Minister Narendra Modi, did not disappoint.

Dressed in his trademark half-sleeved cotton kurta, he held everybody's attention as he spoke on a range of topics from his fashion sense and dietary habits to secularism and investor confidence in India.

Modi was making his debut on Google+ Hangouts - he was the first Indian politician to use this application for group video chats. He answered live questions from Indians across the world, with the interaction broadcast on YouTube and Modi's Google+ page. The session was also beamed on TV channels. The NaMo Hangouts was a huge hit - 82,000 people across 116 countries watched it live on YouTube, but millions more watched the interaction on television. It also generated 70,000 tweets and about 166,000 hits on Modi's website. 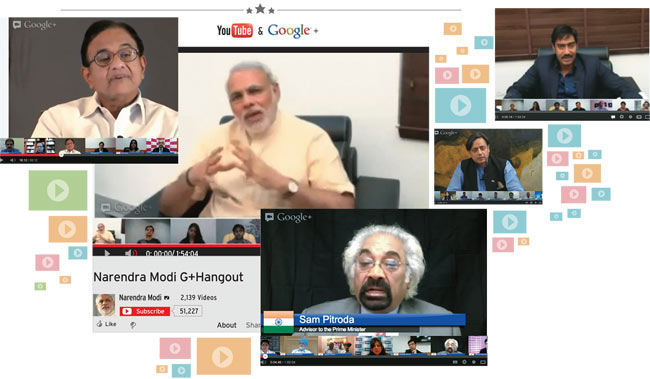 It was, in many ways, a victory for advocates of media convergence. The buzz it created on social media and offline caught the imagination of others. In the past year, Minister of Finance P. Chidambaram, Minister of State for Human Resource Development Shashi Tharoor and Minister of State for Communications and Information Technology Milind Deora, among others, have participated in Google Hangouts moderated by well-known names. Actor Ajay Devgn, for instance, moderated the discussion with Modi.

Though similar to television debates, politicians still find the format exciting. "You can't be heard in Parliament, you can't be heard on a TV channel. Where else as a representative of the government can you explain to people," wonders Deora, Lok Sabha member from South Mumbai. "The Hangouts interview was more structured and it was not a shouting match that you have on television. Questioners had the time to raise an issue and you had time to answer without being interrupted. Second, it is a new medium that is interactive."

Google believes Hangouts change the way elected officials interact with citizens. "With a phone or webcam, people around the globe are now engaging with candidates and their elected officials in face-toface video chats for free. This is taking democratic engagement to a new era," says Sandeep Menon, Country Head of Marketing at Google India, on email.

Nor are participants in video chats shy of asking tough questions. Deora, for example, was quizzed on the digital divide, the use of data by the poor, whether the Indian government was mature enough to handle demographic chatter, cell tower radiation and controversial sections of the Information Technology Act, among other matters. The participants are handpicked by Google through contests and tie-ups with third party social media groups such as OurSay. "We were overwhelmed by the number of questions asked of Narendra Modi. It personalises the message and people feel connected," says Arvind Gupta, Convenor of the Bharatiya Janata Party's Information Technology cell. Modi received over 20,000 questions from Indians through various media.

Organising Hangouts that can be broadcast across different media needs a lot of back-end orchestration from Google. The product on its own is not always a smooth sail, as Rajeev Gowda, Congress spokesman in Karnataka, discovered. "We wanted to see if the solution could be used during the Karnataka elections earlier this year. We did a test run amongst my team and ran into bandwidth challenges." However, he also acknowledges its strengths. "While Hangouts may require a reasonable amount of orchestration now, it does give the man on the street a chance to interact with a top leader," he adds.

Top leaders are likely to increasingly veer to social media because the general election is less than a year away. A report by IRIS Knowledge Foundation and The Internet and Mobile Association of India released in April expects social media to play a big role in the 2014 elections. According to the report, 160 of the country's 543 Lok Sabha constituencies are "high impact constituencies" where Facebook users account for over 10 per cent of the voting population. Or else these are constituencies where the number of Facebook users exceeds the victory margin of the winner in the last Lok Sabha election.

Others are more sceptical. Experts say the number of social media users in urban India is likely to rise from 62 million in December 2012 to about 80 million by election time. But that is still a minuscule number in a country of more than a billion people. "I expect that in the coming election, social media will make its presence felt but it will not be a deciding factor. But one or two elections down the road, it will be a much more significant catalyst," says Baijayant 'Jay' Panda of the Biju Janata Dal, Lok Sabha MP from Orissa, who participated in a Planning Commission Hangouts. I expect that in the coming election, social media will make its presence felt but it will not be a deciding factor. But one or two elections down the road, it will be a much more significant catalyst: Jay Panda
"If you can trigger support among people on social media in an urban constituency and then get each one of them to motivate five people not on the Internet to support you, you have quite a bit of leverage." But Google+ Hangouts has stiff competition from Facebook, which has a similar video chat service called Livestream.

Facebook has conducted live chats with celebrities such as Hrithik Roshan, Madhuri Dixit and John Abraham. It is easy to replicate such events with politicians as well. Already, some politicians such as Panda appear to spend far more time on Facebook.

"I interact with Facebook quite a lot. Facebook has reached out and has held training sessions for my team on how best we can make use of the platform," he says. For now, Google+ Hangouts is still creating more of a buzz. As Modi said at the beginning of his Hangouts session: "Google+ is the pulse of the globe." Almost.