At least two entrepreneurs hope so. Pradeep Gidwani and Rahul Singh, owners of two respective beer cafe chains, want to make the drink as easily available and as widely consumed as coffee in India.

Pradeep Gidwani, owner of The Pint Room, plans to have 20 outlets by end-2013 <em>Photo: Vivan Mehra/www.indiatodayimages.com</em>
Dearton Thomas Hector
Pradeep Gidwani is a man with a dream. Many would call it a pipedream, but Gidwani insists it can come true. He wants to make beer as easily available and as widely consumed as coffee in India. To realise his dream, the former CEO of two leading beer brands, Carlsberg India and Foster's India, has turned entrepreneur.

He is founder of The Pint Room, begun in July last year, which already has five outlets - two in Mumbai, one each in Delhi, Panchkula near Chandigarh, and Bangalore - and intends to raise their number to 20 by the end of this year. "We want to be the Starbucks of beer," he says.

Indeed, The Pint Room is his second effort. His first started in December 2010, when he launched The Beer Cafe in partnership with Rahul Singh, former Executive Director (Apparel) at sportswear retailer Reebok India, in Delhi's Vasant Kunj.

"My idea of a beer cafe is one which looks less like a bar or a pub, and more like a coffee shop," says Gidwani. "I want to create a space where conversations can be had over beer, without loud music or dim lights."

He joined hands with Singh because of the latter's wide experience in retail. Today, The Beer Cafe is competition. The partners developed differences and ultimately Singh bought the brand from Gidwani. 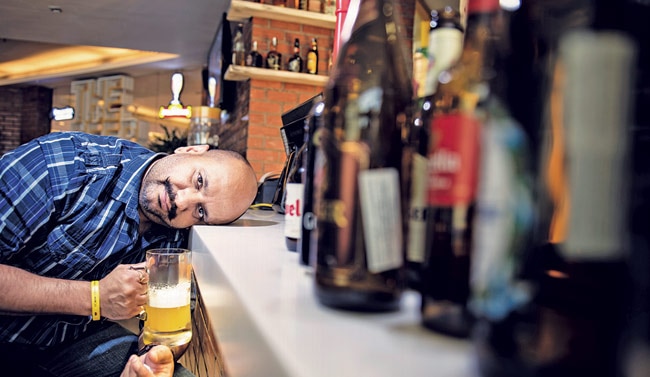 Rahul Singh of The Beer Cafe expects his revenue to quadruple this year Photo: Aditya Kapoor
What went wrong?

"Pradeep is passionate about beer," says Singh. "But I'm a focused businessman. This is just a business for me." A major difference arose over how the chain should expand - Gidwani wanted to open in all major Indian cities, while Singh insisted on concentrating on North India.

The Beer Cafe now has six outlets - all of them in the National Capital Region and Chandigarh. Singh too wants to touch 20 cafes by the end of the year.

But Singh shares Gidwani's conviction that beer could outsell coffee one day. His outlet in Delhi's Connaught Place is sandwiched between two coffee shops - one run by the coffee chain Cafe Coffee Day and the other by its rival, Costa Coffee. "I want to take away their market share," he says.

Are the two men serious?

Cafe Coffee Day alone has around 1,500 outlets. And India is hardly a beer drinking country. Industry estimates put India's per capita annual beer consumption at no more than 1.5 litre. The corresponding figure for neighbouring China is 35 litre. The beer market in India is valued at around Rs 32,000 crore and has been growing at a compound annual growth rate of 12 per cent for the last three years.

Gidwani is not fazed. "Before the coffee chains established themselves, sceptics used to say we were a tea drinking nation. Now everyone can see the success of coffee," he says.

How are the fledgling beer chains doing? Both The Pint Room and The Beer Cafe have around 40 brands on offer from local ones such as Kingfisher to imported premium ones such as Chimay from Belgium and Estrella Damm Inedit from Spain.

Prices range from Rs 100 to Rs 800 a bottle. While Gidwani is reluctant to discuss figures, Singh says he had a turnover of around Rs 5 crore in 2012/13, with a profit margin of 20 per cent. Mayfield Fund, a California-based private equity firm, has pumped $5 million into The Beer Cafe for a minority stake, and Singh expects his revenue to quadruple this year as, flush with funds, he opens more outlets.

Random customers spoken to gave both chains the thumbs up. "They serve beer at the exact temperature that it should be and in the right glasses or mugs," says Ishaan Oberoi, hotelier and self confessed 'beer fanatic', about The Pint Room.

So too Himanshu Shekhar, who heads operations at a maker of power monitoring gear. says he frequently takes his clients to The Beer Cafe. But sceptics remain unconvinced. "The success of these chains is largely an urban up-market phenomenon," says Samar Singh Sheikhawat, Senior Vice President, Marketing, United Breweries. "In terms of scalability, I don't see much potential. But it is good for the industry." Given the plethora of restrictions governing the sale of beer and spirits, they also expect the bureaucracy to prove a hurdle to rapid expansion. "It's going to be a bumpy ride. It's not easy to crack the market because rules are different in different states," says Ankur Bisen, Vice President and Head of Retail and Consumer Products at advisory services firm, Technopak.