FMCG companies are tapping opportunities in the growing consumer healthcare market, one of the many categories that blur the distinction between fast-moving consumer goods and pharmaceuticals.

Manu Kaushik
In mid-2007, Praveen Jaipuriar, Category Head of Health Supplements at Dabur India, hit a brick wall. The company's internal research found that children tended to stop eating its largest-selling brand, Chyawanprash, an ayurvedic health tonic, once they crossed 13 and did not go back to it until they were 30.

"Usually, people in the 13 to 30 age group do not care too much about their health. They often view Chyawanprash as some old-world health supplement. For children below 13, it is usually the parents who feed them Chyawanprash; and by the time they reach 30, they start taking their health seriously," says Jaipuriar. 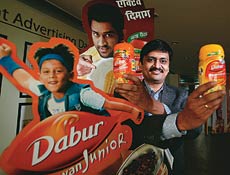 At Rs 250 crore, Dabur Chyawanprash is the biggest brand in the fastgrowing consumer healthcare market. It is also one of the many categories that blurs the distinction between fast-moving consumer goods, or FMCG, and pharmaceuticals. And a few companies from both sides want to be positioned at the sweet spot where the two meet: Drug companies want to get into the consumer healthcare space, and FMCG companies into over-the-counter, or OTC, drugs.

Recently, personal care giant Reckitt Benckiser bought Ahmedabadbased Paras Pharmaceuticals when two of its biggest stakeholders, Actis and Sequoia Capital, decided to sell out. With its established consumer base and marketing network, Paras was on the radar of companies such as GlaxoSmithKline, Sanofi-aventis, Emami, Dabur, Reckitt Benckiser and Marico. Reckitt paid a whopping Rs 3,260 crore by valuing Paras at eight times its 2009-10 sales of Rs 401 crore to clinch the deal.

"The consumer healthcare segment is growing at around 18 per cent, almost 1.5 times the rate at which the FMCG sector is growing," points out Nikhil Vora, Managing Director at brokerage house IDFCSSKI. Rising fees of medical professionals, an increasing penchant for self-medication, aggressive advertising and increasing faith in traditional medicinal systems like ayurveda are driving this growth.

"Rising disposable incomes coupled with the onset of lifestyle-related diseases and growing awareness about health care are contributing to the demand for such products," says Ashish Nanda, Partner of Consumer Products Practice at Ernst & Young. According to the UK-based OTC consultancy Nicholas Hall & Company, the Indian OTC pharma market was worth $1.8 billion (Rs 8,640 crore) in 2009.

"The segment has gained traction in the last few years, with the entry of several foreign and domestic players," points out Vora. Much of this growth has come through the inorganic route. Kolkata-headquartered FMCG firm Emami paid Rs 730 crore for Zandu Pharmaceuticals in 2008; and the 117-year-old Amrutanjan Health Care is being seen as an attractive target for acquisition although its promoters have reportedly said they are in no mood to sell and are looking at buyouts themselves. 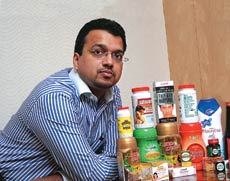 Harsh V. Agarwal, Director, Emami Group
"Companies like Amrutanjan, Zandu and Paras are in demand because they have established brands and a wide product portfolio," says Vora. At eight times its sales, Paras may have been valued richly, but analysts say it has commanded such a price because there are not too many opportunities for inorganic growth in this lucrative segment.

The Paras Premium
With Paras in the bag, Reckitt, which is predominantly an FMCG player in India, now has access to leading OTC brands such as Moov pain relief ointment, Krack heel care cream, D'Cold cold and cough remedy, and Itch Guard anti-fungal cream. "Paras has delivered mid-teen net sales growth on an average over the last four years. In the latest financial year, the net sales growth was closer to 30 per cent. Given our existing strong platform here, we believe that we can build on the success that Paras has already enjoyed," says Chander Mohan Sethi, Chairman & Managing Director of Reckitt Benckiser (India).

"Both the companies have a strong distribution network across the country. It is a perfect integration as there is absolutely no overlap between the product portfolios of the two," says Anil Khanna, Business Head of CubeX, a consulting firm for the OTC business.

Emami is another player strengthening its presence in the consumer healthcare market. Before acquiring Zandu, the company had just three main brands in its ayurvedic OTC portfolio - Sona Chandi Chyawanprash, Himani Fast Relief pain reliever and Mentho Plus balm. Almost all of Emami's revenues came from its personal care business.

Today, the group owns 15 consumer healthcare brands that contribute more than 35 per cent to its turnover, with Zandu Balm contributing a chunk. What is more, the Zandu acquisition provided Emami with a platform to launch a range of OTC drug brands such as blood and skin purifier Lalima, cough syrup Sardi Ja, laxative powder Good Morning, and memory tonic Memo Plus.

"We are targeting Rs 600 crore in revenues from consumer health care by December 2011, up from Rs 450 crore till December 2010," says Harsh V. Agarwal, Director of Emami Group.

A major attraction of OTC pharma is the margins, which are almost double those in FMCG. "On an average, the operating margins in OTC pharma could vary between 20 and 25 per cent compared to 12 to 15 per cent margins in the FMCG sector," says Khanna of CubeX. Like FMCG, though, investments in brand-building are an imperative. As Khanna adds: "Once the brand is established, it can command higher margins."

Consider the example of Ranbaxy's health supplement Revital, which was launched in 1989 - not as an OTC product but via doctor-focused marketing. For the next 13 years, Revital plodded along to become a Rs 35-crore brand. In 2002, Ranbaxy decided to sell it over the counter. Result: Revital has grown into a Rs 160-crore brand.

FMCG major Dabur, which has been selling herbal and ayurvedic products, is also foraying into new categories within the consumer healthcare market. In fact, in the past year, Dabur's new product launches have been only in the OTC pharma space, including two variants of Chyawanprash, vitamin and mineral supplement NUTRiGO, acidity remedy Pudin Hara and Lemon Fizz, and Honitus Day & Night for cold and flu relief. Most of these products are the outcome of the R&D activities of the company throughout the year. "Our foray is driven by the fact that penetration in the consumer healthcare market is abysmally low.

The personal care market penetration is six to seven times higher than this segment. Whilst we have entered the modern OTC market with nutraceutical products, we will continue to expand our ayurvedic OTC portfolio as well," says Jaipuriar, adding that the consumer healthcare segment is growing at 20 per cent year on year, whereas the personal care and FMCG business growth is around 15 per cent.

Dabur has a pretty balanced portfolio. Of its 2009-10 revenues of Rs 3,500 crore, Rs 900 crore came from the consumer healthcare segment. And that part of the pie is set to expand at a rapid rate. "Within OTC pharma, the vitamin and mineral supplements, or VMS, category is growing at a compounded annual growth rate of 16 per cent. There are many niche areas like protein supplements, multivitamins, and herbal supplements which are exciting opportunities for us; as is lifestyle OTC, like heart health," says Jaipuriar.

The success of OTC pharma has plenty to do with the role played by chemists, who have more or less taken charge of day-to-day ailments, of consumers who cannot decide on their own. Although OTC medicines are sold at grocery stores, consumers still prefer to buy them from chemist shops. For instance, 65 per cent of Dabur Chyawanprash's sales come from pharmacies. One reason for this may be, as Khanna explains: "Chemists not only dispense medicines but also advice."

In the meantime, even as FMCG companies make inroads into consumer health care, drug makers, too, have spotted the opportunity in products that do not need a prescription. Aventis Pharma, the Indian arm of French pharma giant Sanofi-aventis, for instance, testlaunched Combiflam cream in select markets a few months ago. Combiflam traditionally has been an OTC pain relief tablet. Mumbai-headquartered Plethico Pharmaceuticals has consumer healthcare products in areas ranging from sports nutrition to foot care to cough and cold.

Clearly, as more and more Indians prefer it over the counter when they are under the weather, the financial health of entrepreneurs in consumer health care has few question marks over it.