Though the government has allowed foreign investment in multi-brand retail, policy riders are holding global retailers back from making significant investments in the country.

Manu Kaushik
On a sultry afternoon in May, the commerce and industry ministry in Delhi had an unexpected rush of people. The minister, Anand Sharma, welcomed his nervous guests, including UK retail giant Tesco Group Chief Executive Philip Clarke and Indian retail company Trent's vice-chairman, Noel Tata - and then quickly got down to business. Over the next 45 minutes, Clarke and his team expressed their reservations about India's policy on foreign investment in the retail sector, while Sharma assured them they would face no problems. Tesco is one of many foreign retailers waiting in the wings since the government threw open the multi-brand sector to foreign investment last September. It hopes to team up with the Tatas to set up shop in the country.

But barely a month after their meeting with Sharma, the retailers are probably on tenterhooks again. Early in June, the government issued a set of clarifications to last year's retail rules which are likely to delay their entry into India. The department of industrial policy and promotion (DIPP) said foreign retailers entering India must build new supply infrastructure such as cold-storage facilities and warehouses, rather than buy existing assets. They have to invest a minimum $100 million, 50 per cent of which must be in back-end infrastructure. A foreign chain's wholesale or cash-and-carry operations are not considered back-end infrastructure. Foreign retailers also have to source at least 30 per cent of their manufactured and processed products from small and medium enterprises. Fresh produce does not count as part of this 30 per cent. Such riders are particularly difficult for players such as Tesco because fresh produce is likely to account for 85 per cent of its sales.

Foreign retailers have been waiting at India's door for years, but analysts say they are unlikely to make significant investments over the next two or three years. According to a report by ratings firm CRISIL, the sourcing and back-end investment rules "are worrisome for foreign retailers operating in retail verticals apart from food and grocery, as segments such as apparels and electronics do not require huge back-end investments". Ambiguity in the retail policy is also likely to deter investors. For example, foreign retailers are not sure if the 50 per cent back-end investment clause only applies to the first tranche or every subsequent investment. Arvind Singhal, chairman of retail consultancy Technopak, says this will deter big retailers such as Walmart, Carrefour and Tesco. "Globally, most retailers invest largely in front-end. The clarifications are not going to make the application process simpler," he says.

Tesco and Walmart say they are reviewing the clarifications. "They have messed up the whole thing. The clarifications do not clarify anything. In fact, they create more doubts," says a senior executive with a leading foreign retailer on condition of anonymity. A DIPP official involved in drafting the policy says the department has not changed anything, but only clarified the rules. "The intent was to create new infrastructure that will benefit the country," he says. 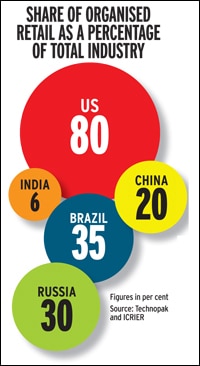 Indian retailers expecting to forge tie-ups with foreign companies are disappointed. Future Group CEO Kishore Biyani says the policy seems to have been drafted only for food retailing. Typically, only food retail chains need to invest in back-end infrastructure. "It does not make sense for retailers engaged in multi-brand retailing of furniture or stationery," says Biyani.

A clause banning foreign retailers from using the franchisee route also crimps their plans. Most foreign retailers planned to use this model to set up shop in states that do not allow multi-brand retail. The policy also says retail stores are only allowed in cities with a population of over one million. India has 53 such cities. But the number gets crimped since only 11 states and union territories allow foreign presence in multi-brand retail. "Only 15 cities fit the bill. Retailers work on volumes," says the foreign retail executive.

India is not the only Asian country wary of foreign retailers. China too opened its market in stages, first allowing foreign retailers a minority stake in retail operations in some cities and then relaxing regulations after domestic retailers had established themselves. Analysts say foreign retailers may not firm up their India plans until the election. "With elections around the corner, there's a constant fear that the new government might change the rules," says Paresh Parekh, partner, Ernst & Young.