How GetMyPeon is making life of busy Mumbaikars easier

Bharat Ahirwar, co-founder of GetMyPeon - a Mumbai-based errand-running service rolled out in 2012 - talks of why Mumbai needed such a company.

'People are in a crunch for somebody who can do a reliable job and understands what he has to do,' says Bharat Ahirwar, Founder, GetMyPeon. (Photo: Rachit Goswami)

Jahnavi Goel runs a small gifting business in south Mumbai that assembles everything from baby clothing, candy and marshmallow pop to beer, cocktail, miniature alcohol bottles and champagne bouquets. But until last June her J's Bouquets couldn't take orders from places like Andheri, in the west of the city, too far for her driver to go and drop the gifts. It was then that she came across GetMyPeon, as she browsed her Facebook pages. The start-up, a local errand-running service, promised same-day deliveries at Rs 200 a task; all mundane work from bill payments, to parcel pick-ups to getting movie tickets. Goel now uses GetMyPeon six to eight times a month, dispatching delicate bouquets to far-off places like Navi Mumbai.

Like Goel, many others in the 18 million-strong city need to get plenty of small tasks done but Mumbai's fast-paced life leaves them with little time. Until a few years ago, tasks such as bill payments or grocery pick-up were done by drivers and maids - both are now getting expensive. Also, drivers are difficult to come by with mushrooming taxi services such as Ola Cabs. GetMyPeon smells blood.

The start-up's command centre is near Eat Around the Corner, a European-style eatery, in Bandra's Pali Hill. The office is bustling with chatter. Between the posters of Mahatma Gandhi hung on a yellow wall and Steve Jobs a little away, sits the round-faced, clean-shaven and expressive Bharat Ahirwar, the company's 29-year-old co-founder. He enthusiastically talks of why Mumbai needed an errand-running company. "People are in a crunch for somebody who can do a reliable job and understands what he has to do." 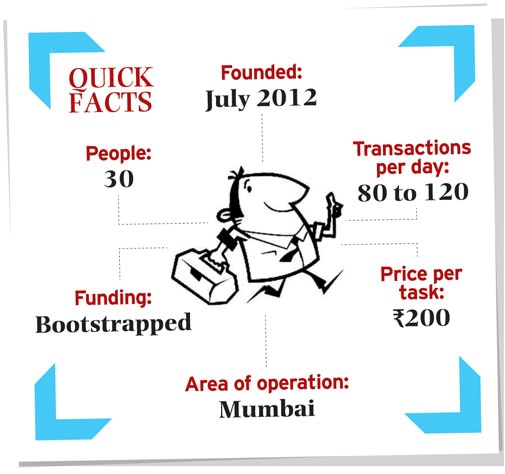 He rolled out the service on July 1, 2012, through a Facebook page and a Twitter handle. He hired one hand and delivered the first task himself: a one-kilogram cake, from a baker in Masjid Bundar in South Mumbai to Bandra. GetMyPeon completed 80 tasks in the first month. Today, it employs 30 full-time employees, and is hiring 20 more. The company runs between 80 and 120 transactions a day, pocketing Rs 20,000 on average. Clients include individuals, small businesses as well as corporate customers. It runs an errand desk at the offices of PepsiCo India and Disney India where employees of these companies can drop whatever they want to be delivered. GetMyPeon gives these corporates a discounted deal. Ahirwar has also roped in Kabir Ahuja as co-founder. The 24-year-old Ahuja was earlier working with his father, who runs an international retail duty-free chain. "He [Ahuja] was a client for three months and used us for document delivery. One day, he said he would like to meet. And we discovered synergies in our thinking. We said we will do this together," Ahirwar recalls. While Ahuja will be responsible for the company's growth, Ahirwar will handle operations.

The company is busy building credibility as a trustworthy organisation running all kinds of errands. An NRI from New York wanted to bite into a vada pav at the international airport, between flights. The pav was delivered from near Mithibai College in Vile Parle West. Someone forgot his iPad at the airport, so GetMyPeon picked it up. Yet another customer wanted his Tata Nano serviced. He handed over his credit card with the pin to a company employee. A dress, worth Rs 40,000, has been picked up from Mumbai and delivered in Pune.

The company is small enough for the founder to do all the job interviews himself. He typically asks his candidates to tell stories - about themselves, families, education, their likes and dislikes. Background checks are then carried out to verify the stories candidates tell. "If they are students, we see if they are really studying. Then there is police verification," Ahirwar says. "Our background checks of employees have been thorough."

The company, according to Ahirwar, has only spoilt one cake last summer. The cake melted because the customer insisted the GetMyPeon staffer travels by bus. The company's workers mostly take the train to deliver their parcels. In Mumbai, that's the fastest mode of transport - it also keeps costs under control for the start-up. Getting a handle on costs was a priority because the company is self-funded. 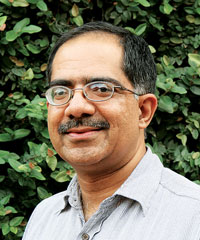 'It is unlikely to scale nationally,' says SHARAD SHARMA, Co-founder, iSPIRT, and an angel investor.
Ahirwar had only Rs 20,000 in the bank when he started GetMyPeon. And this venture was a last attempt at entrepreneurship after two failures. Ahirwar's first attempt at entrepreneurship was in 2008 when he started promoting a belly dancer from Brazil, Veronica De Souza, who wanted to take classes in Mumbai. "Belly dance was sensual and people learning it were all women. So it was difficult for a guy to be there in the studio. So we parted ways," he says. His second attempt, in 2010, was a company called 'At Your Service Mumbai' targeted at expats. He hired four employees who helped expat CEOs, COOs and CFOs moving into India with the right houses, furniture, and telephone connections, among other services. "We helped them settle in for three months. But the life span of a customer was just three months. I was burning money - all my savings were gone," says Ahirwar.

For a year after he started GetMyPeon, Facebook and Twitter were his only source of reaching out to customers. The company now has a good-looking website and a mobile app is coming soon. Venture funding will be required to scale, and expand to other cities. "Operationally, we are making enough to pay everybody's salary. We want to run 150 to 200 tasks a day consistently for three months before approaching VCs," Ahirwar says.

VCs Business Today spoke to had different takes on the company. Some thought it is a good model but are worried about scalability - like in information technology services, it is also a people business but at Rs 200 per transaction, is very low value. "GetMyPeon is a good idea. It's an example of a local business coming online. However, it is unlikely to scale nationally," says Sharad Sharma, Co-founder of software product think tank iSPIRT and an angel investor.

But V. Balakrishnan, a former director at Infosys who recently turned a venture capitalist, says any model that provides a greater user experience with convenience and low costs will succeed. "I think the GetMyPeon.com concept will resonate well with a majority of people who want to lessen their focus on mundane things. It will also tremendously help to improve their productivity by freeing up their time and focus on big things in life" 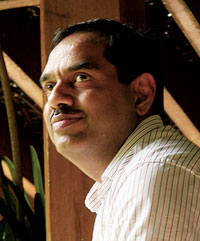 'The concept will resonate well with a majority of people,' says V. BALAKRISHNAN, Venture capitalist and ex-Infosys director.
There are very few companies in the space. Timesaverz, also based out of Mumbai, provides various home services ranging from cleaning, repairs, handyman jobs to running errands and helping in paperwork. Some have bitten the dust before. Chachii.com, which matched customers with labourers based on location, budget and deadlines, shut down operations a year after its launch in 2011. "Many factors played a part in the Chachii team making the hard decision to shut down operations. Perhaps, the most hard-hitting was our inability to gain sufficient traction to justify keep running our operations," founders Tanvi Surti and Nikhil Goel wrote in a note in 2012.

Ahirwar, however, is not connecting customers with workers. He employs them full-time. In any case, he disagrees that the model is not scaleable. It has worked elsewhere. The US-based TaskRabbit, which started in 2008, connects customers to workers at hourly prices. The company has raised nearly $40 million in venture funding and has expanded to 19 cities, including London.

"This is a field that cannot move online. Drones cannot do our job either. And there are international players who have justified this model," Ahirwar reasons. "I may not have a 1,000 people running around. But I will have at least 100. We will take it slow but we will do the right thing," he adds.

The founder is dreaming beyond India, too. The Gandhi poster in his office has a bold message: 'Man is product of his thoughts. What he thinks, he becomes'.