Elgi Equipments, the second-largest player in the Indian air compressor market and a leader in the reciprocating compressor segment is not happy being a 'big fish in a small pond'. So, it is mastering the technology, tweaking its production processes and quality levels to foray into the global market. N. Madhavan reports.

Jairam Varadaraj is a man in a hurry. The Managing Director of the Coimbatorebased Elgi Equipments (EEL)—Jay to his colleagues— heads a company that is the second-largest player in the Indian air compressor market; it is also the market leader in the reciprocating compressor segment, and exports its equipment to over 50 countries. Men on a mission
But, being a dominant player in the Rs 1,500-crore Indian market doesn’t excite him. He has set his sights higher: his goal is to become a global player and increase Elgi’s trivial share in the Rs 36,000-crore global market within the next seven years, and achieve a top line of Rs 4,000 crore. In line with this, EEL is establishing beachheads in various corners of the world.

In August this year, the company’s Chinese facility, located at Jiaxing, 100 km from Shanghai, will commence operations. “With a market size of $1.4 billion (Rs 6,020 crore), China is the largest and fastest growing compressor market in the world.

Elgi China will initially cater to the domestic market in that country and later look at exports,” says Siddharth Shrivastav, General Manager, Elgi China. It will face stiff competition there. Deep-pocketed multinationals like Atlas Copco, which is the market leader in India, Ingersoll Rand, Sullair, CompAir and Kaeser Kompressoren are already entrenched there. Then, there is a host of local companies as well. 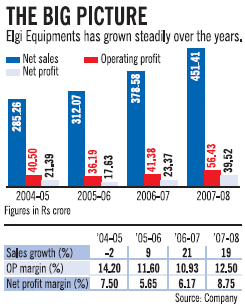 But, EEL has its game plan chalked out. “We will position ourselves as a service-oriented company and work towards becoming one of the top 10 players in that country over the next decade,” adds Shrivastav. Over the next five years, the company expects China to account for 10 per cent of its global revenues.

Then, later this year, the company will commence warehousing operations in Brazil as a prelude to the launch of a full-fledged assembly facility that is expected to start operations by the end of 2009. “Brazil is an attractive market. We will also use it as a base to tap demand in neighbouring countries such as Chile, Colombia and Argentina,” says M.S. Anand, Regional Head (Americas), at the company. EEL is also planning to set up a warehousing facility at Sharjah. “The world air compressor market is growing at 6 per cent per annum and offers excellent scope for growth. Our offshore facilities will help us cut costs, lower freight charges and reduce delivery times substantially,” says V.T. Govindarajan, Director (Global Business), EEL. Adds Varadaraj: “By 2015, we expect our turnover to be around Rs 4,000 crore. Of this, Rs 3,000 crore, or 75 per cent, will come from outside India.” The comparable 2007-08 figures were Rs 451 crore, Rs 71 crore and 15.75 per cent, respectively.

EEL, clearly, is at an inflexion point. But getting to it wasn’t easy. When Varadaraj first visualised his growth strategy in the mid-1990s, he realised that EEL wasn’t ready for it. It was present in several unrelated businesses—like pasteurisers, bottle washers, braking systems for trucks, diesel engines, wipers, horns and fuel bowsers. These businesses accounted for about 20 per cent of its turnover then. Its core compressor business was small and, worse, depended on others for technology.

Then, its manufacturing practices, though not rudimentary, were grossly inefficient. Spring cleaning was clearly in order. Varadaraj and his team sold or shuttered unrelated businesses and cut EEL’s workforce by more than half. The balance sheet, which carried debt of Rs 80 crore, was also cleaned up. “Invariably, we got earlier-generation technology. We were always kept a few stages behind. In a way, we were slaves,” says Varadaraj. EEL’s global ambitions, he understood, would remain stillborn if the technology was licensed, as such agreements restricted its use to India. So, in 1996, EEL began working with the City University, London, to develop the technology for designing and manufacturing airends. In 2000, it began commercial production of the new airends that came out of this collaboration.

“This earned us the right to live,” says Varadaraj. Very few companies in the world have the technology to make airends. “Had we not got the technology, our business today would have been 40 per cent less than what it is and the global foray would have remained a pipe dream,” adds Govindarajan.

EEL simultaneously rationalised its manufacturing practices. “We developed the ‘Elgi Manufacturing System’, a customised blend of Total Quality Management (TQM), Total Productive Maintenance (TPM) and lean manufacturing. The results have been good. Over the last two years, machine down time has dropped 60 per cent and inventory costs have been pruned 56 per cent.

Result: productivity is up 51 per cent and lead time to market has shrunk from eight weeks to just seven days. Customer complaints are also down 24 per cent,” says K. Srinivasa Rao, Director (Operations), EEL. Says Nishit Master, Research Analyst, Anand Rathi Research: “These measures have helped EEL improve its operating margins by 121 basis points in 2007-08 despite an increase in raw material costs.”

EEL products have a strong brand recall across the country and more so in the south. But what sets them apart is the service levels the company offers, says a senior production manager at a mid-sized auto components company, which has been using EEL compressors for many years.

The company has also been widening its management bandwidth to handle its rapid growth. The top team today is a blend of talent from across the country. “Varadaraj spends a lot of time identifying talent that can push the company’s growth plans and then ropes them into the company,” says Master.

EEL still has many challenges to overcome. India is now moving towards oil-free screw air compressors. According to Raghavan Neelakantan, Senior General Manager (Domestic Sales & Service), the company already has a 25 per cent market share in that segment. But technology for this product continues to be licensed, though the company is working on special oil-free compressors applications. An electric air screw compressor at EELs Coimbatore plant
“Oil-free compressors are the direction the world wants to move in,” agrees Madhu Ganesh, Head (Technology Development), EEL, adding: “We need to work on gas and centrifugal air compressor technology, too. These are advanced technologies and we have to master them as well.” The company is, thus, drawing up a plan to move up the technology chain.

Then, the US and Europe are the two big markets the company has not penetrated significantly. Only an acquisition will give EEL a foothold in these markets. Says Varadaraj: “Our 2015 revenue target of Rs 4,000 crore factors an acquisition.

That is the only way to grow quickly, especially when you have technology and products. We have had no prior experience in acquiring companies. There is some trepidation, but we will take the plunge.” The acquisition of a medium-sized company should not be a tall order for EEL as it is a zerodebt company with a net worth of Rs 135 crore, giving it sufficient leeway to raise significant amounts of cash. Moreover, its operations generate Rs 30 crore of cash every year. Luckily for the company, local demand is expected to remain buoyant even as it forays abroad.

According to a research report by DBS Cholamandalam Securities, domestic demand is expected to grow at a compounded annual growth rate of 25 per cent over the next two years.

Meanwhile, the EEL scrip has moved in tandem with the market. It touched a high of Rs 94.80 in January 2008 and is currently trading at Rs 52. Both Anand Rathi Research and DBS Cholamandalam Securities see merit in the company’s global foray and have put a buy recommendation with a price target of Rs 89 and 86, respectively, in 12 months.

The future looks bright, but Varadaraj wants more. “We are still a big fish in a small pond,” Varadaraj admits, with disarming candour. That’s possibly because he’s confident of growing into a bigger fish in a much larger lake.