For G.M. Rao, the founder-chairman of GMR Group, entering the airport sector was a bold step, but one which has yet to reward him. The airport vertical of GMR Infrastructure is bleeding, with losses of Rs 557.9 crore in 2011-12 and Rs 47.5 crore in the first half of the current fiscal year.

The situation worsened in late November, when the Maldives government unilaterally cancelled the contract for the Male airport it had signed with GMR in June 2010. The state-owned Maldives Airport Co. Ltd (MACL), which was running the airport earlier, took it over again. For the Male airport was profitable, indeed the most profitable of the four airports the company was running.

In the first six months of the current financial year, it made a net profit of Rs 82.9 crore, compared to which Hyderabad airport had a profit of Rs 19.9 crore, while both Delhi and Istanbul airports ran up losses of Rs 90.8 crore and Rs 45 crore, respectively.

Though low on passenger volumes, Male was earning profits because GMR had successfully contained interest and finance costs, getting dollar loans at competitive rates. Indeed, both Delhi and Hyderabad airports have better operating profit margins than Male, but in terms of net profit it is Male which scores. "Interest and finance costs are steep at Delhi and Hyderabad airports, while Male provided a relief for GMR's airports business as a whole," says Vivek Mallya, a Bangalore-based chartered accountant.

In addition, unlike at other airports, the Male airport contract also included the right to sell aviation fuel, which contributed Rs 379 crore to the company's total revenue of Rs 661 crore in the first six months of this year. 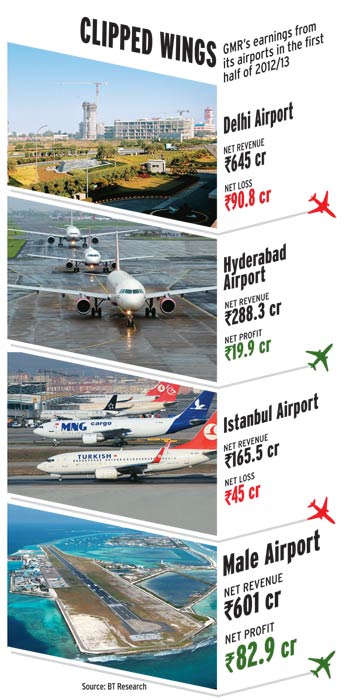 Writing on the wall
But the writing had been on the wall for some months. The GMR-led combine, which had won the contract to develop and run Male airport for 25 years beating rivals led by the GVK Group and Aeroports de Paris, was perceived in the Maldives as being close to its previous president, Mohammed Nasheed. In February 2012, following some street protests against the government, the former Vice President, Mohammed Waheed Hasan, in a backroom coup, displaced Nasheed to become president himself. Ever since then the fate of the contract had been uncertain.

"It was not seen as a fair deal at all. The contract was not acceptable to the public," says Masood Imad, Media Secretary in the Maldives President's Office, and a former MACL director. "The technical evaluation committee qualified GMR for the project under pressure from Nasheed." Sidharath Kapur, Chief Financial Officer, GMR Airports, denies the charge emphatically. "We won the project in an open and transparent bidding process overseen by the International Finance Corporation, a World Bank affiliate, which has successfully handled such public-private partnerships in the airport sector in many countries," he says. GMR, which held 77 per cent in the joint venture with the Malaysia Airport Holdings Berhad (MAHB), is seeking compensation of more than $800 million from the Maldives government.

The unpaid bills of Indian airlines using its Delhi and Hyderabad airports, particularly Air India and Kingfisher, which owe it Rs 520.90 crore and Rs 44.90 crore, respectively, are yet another source of GMR's travails. Not surprisingly, GMR Infrastructure's scrip was trading at around Rs 18 in the last week of December, down from its 52-week high of Rs 34.50 on the National Stock Exchange on March 14.

Rating agency ICRA has also downgraded its long-term rating outlook on the company from stable to 'negative'. "The negative rating outlook reflects the possibility of cash support having to be extended by the group to several operational/under implementation assets which would serve to worsen the already stretched funding position of the group," ICRA's report says. It has also lowered the rating assigned to GMR Infrastructure's short-term loan programme because of "the growing regulatory and political risks" impacting many of the  group's assets, including its airports. The Male development will not dampen our zeal to look at global opportunities in the airports sector: Sidharath Kapur (seen here at the Delhi airport, which GMR built)Photo: Shekhar Ghosh/www.indiatodayimages.com
So what next for GMR's airport business? Kapur is not unduly worried about the payments due from airlines. "We know we will get Air India's dues because it is a government airline. The only problem is when," he says. He expects some payments to come in from January. As for the airports, if there have been setbacks, there are also signs of hope. At Delhi, for instance, though it is early days yet, financials have started to improve ever since the airport regulator, the Airports Economic Regulatory Authority, allowed a steep 352 per cent increase in aeronautical charges from May 15, 2012.

Things can only get better
The GMR-led consortium took over the Delhi airport for 30 years in April 2006, following an operations, management and development agreement it signed with the Airports Authority of India (AAI), but has yet to make a profit. "Delhi airport will become profitable at the net level by the last quarter of this financial year or the quarter after that," says Kapur. The agreement with the AAI also included the right to develop around 250 acres of land around the airport for commercial use. GMR has awarded development rights for 45 acres so far, and is waiting for both regulatory clarity as well as market revival before taking up the rest. This is expected to be a further source of regular revenue. Click here to Enlarge
The main problem besetting the Sabiha Gokcen Airport in Istanbul is that there is an older airport, the Kemal Ataturk International Airport, barely 45 km away, to which the bulk of air traffic to the city still goes. But traffic at the new airport has been steadily increasing since it opened in October 2009, and is likely to accelerate once Turkish Airlines - as it has already announced - starts basing five more aircraft at this airport from the coming summer. GMR hopes this will bring in at least 400,000 more international travellers to the new airport. "Turkey will take another four or five quarters to report profits," says Kapur.

Besides, as air traffic increases worldwide, the airport business is bound to expand as well. "The Maldives experience will not dampen our zeal to look at global opportunities in the airports sector," says Kapur. "At this stage we have nothing to bid for, but there are many potential opportunities." GMR, however, should proceed with care, feel analysts. "The group should look for airports where user charges are better and growing, interest and finance costs are lower and profit margins better," says a sector expert. Again, in Turkey, GMR had a local partner, Limak Holding, but none such in The Maldives - which holds a lesson too.

"Companies should always consider having a strong local partner with high credibility and relationships across the political spectrum, more so in the high visibility airport sector," says Amber Dubey, Head of Aviation at the consulting firm KPMG.