A tale of two villages

Akodara and Daramali, two villages in Sabarkantha district, Gujarat, separated by about 25 km, are similar in many respects. Both have a population of less than 2,000, with Patels as the dominant caste. The Patels own on average one to five acres of land and 20-30 heads of cattle. Both villages cultivate the same crops - cotton, wheat and castor - and have a literacy rate of around 90 per cent. But while both are pioneers in their own way, Akodara is nationally renowned while Daramali remains obscure. Akodara has been much lauded as the country's first 'digital, cashless village', its achievement endorsed by none other than Prime Minister Narendra Modi himself on January 5, 2015, when he 'dedicated' the village to the nation. But little-known Daramali's achievement is perhaps more impressive, as it has shown how a focused grampanchayat led by a woman sarpanch can, despite limited resources, usher in digital 'smartness'.

Akodara's transformation is the result of ICICI Bank adopting it under its corporate social responsibility (CSR) initiative. The demonetisation decision of November 8 has brought it back into the limelight for the contrast it offers to most other villages in the country whose economy, reliant entirely on cash, has been near-crippled since. TV crews, including many from overseas, have been arriving so often that many of the locals, with repeated practice, have become adept performers in front of the cameras. The village centre naturally has an ICICI Bank branch as well as an ICICI ATM along with a small BPO where the bank trains a batch of 10 to take up BPO jobs. 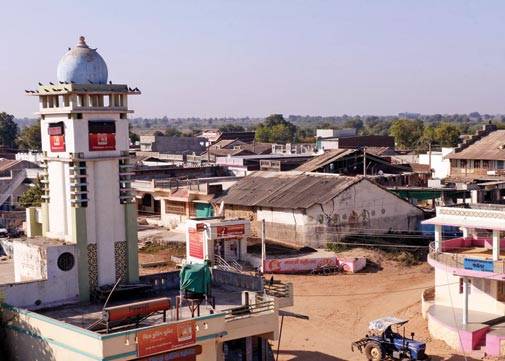 The village centre at Akodara

The village centre also has a milk collection centre, which, too, has a story. Even before cashlessness made Akodara famous, it had taken a unique step - that of setting up what is called Asia's first animal hostel. All the cattle of the village are housed, not with their owners, but in two giant sheds at this hostel, built at a cost of Rs 6 crore. They have tags and their owners arrive every morning to milk their own and sell the milk to the centre. With the infrastructure the hostel possesses - water tank, biogas plant, fodder production and compost fertiliser production capacities - the animals are perhaps better looked after and utilised in the hostel than they would have been with their owners. In case of disease, the hostel takes responsibility for their cure with the owner paying just Rs 100. The annual rental per head of cattle is Rs 300.

Before ICICI Bank arrived, Akodara never had a bank branch. Its officials not only opened accounts but also explained net banking to the villagers and ensured the entire area was Wi-Fi enabled. So far, over 1,200 bank accounts have been opened with all account holders provided RuPay debit cards. The provision stores in the village have swipe card machines and almost every resident has a smartphone. E-receipts for the milk sold to the collection centre - run by Sabar Dairy, an Amul affiliate - reach the villagers on their mobiles while payments are credited every 10 days directly into their ICICI Bank accounts. "We collect 500-600 litres daily from 177 members of our milk cooperative and deposit around Rs 20 lakh every month in the bank," says Palak Patel, Chairman of the cooperative. For the cooperative members, the profit from the milk is around 40 per cent. 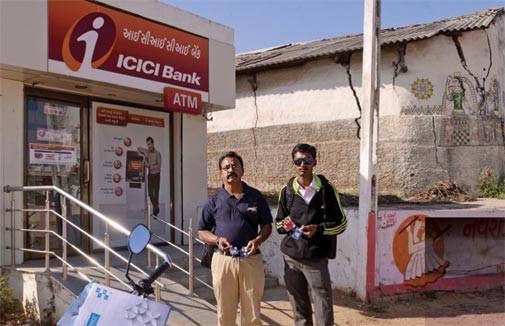 Cotton and wheat farmers, too, have gone digital with local mandi commission agents also being brought to the digital platform. ICICI Bank also provides computer education at the local school and has launched a skill development centre for women. "We are training 30 women to stitch garments and have ensured marketing linkages so that they earn at least Rs 150 a day," says Amit Pandey, Project Coordinator of the centre. It also set up a reverse osmosis plant to ensure clean water for the village, providing a loan of Rs 1.5 lakh. "We sell about 1,000 litres of water a day, charging Rs 8 for a 20-litre bottle," says Mukesh, Vice President of the cooperative that runs the plant.

Daramali has not had Akodara's luck of an external benefactor like ICICI Bank. Yet Hetalben Ankurbhai Desai, its sarpanch, has ensured it has Wi-Fi, while almost every household has either a tablet or a laptop. (She is currently the ex-sarpanch, her five-year term having been completed, but will contest again when elections are next held. "The village has unanimously decided that no one will contest against me," she says.) Around 70 per cent of Daramali's residents have smartphones.

Desai's achievements are formidable. She has had 16 CCTV cameras installed across the village to ensure security. Fulfilling Prime Minister Narendra Modi's Swachh Bharat dream, the village is 100 per cent swachh, with a drainage system reaching every hamlet and household and daily waste collection. "If anyone is caught urinating outdoors, he is fined Rs 1,000 by the panchayat," says Desai. The village has its own blood bank, a government- run primary school and higher secondary school, apart from an English-medium private primary school. All the schools have Internet-linked computers with even Class III students having their own e-mail accounts. Students do their homework online and even hold video conferences with the Collector at the district headquarters in Himmatnagar whenever required. Extra-curricular activities include horse riding, skating, karate and numerous sports. Daramali has also set up 10-15 women's self-help groups which make and sell phenyl, washing powder, chilli and turmeric powder. Here too connectivity is making a difference, with residents using an app called DRML, which they built themselves and is available on Google Playstore, to digitally market their products, streamline inventory and the supply chain. The panchayat has acquired a swipe card machine as well to collect property and other taxes. The village received the 'skilled village' award from the Gujarat government in 2015.

Desai freely acknowledges the support and guidance of her schoolteacher husband, Ankur. Apart from supporting her work, he has also set up a knowledge management centre to follow up on the progress of Central and state development schemes being implemented in the village or those it is eligible for. Such schemes, diligently pursued, have brought in funds of Rs 1.39 crore to the village in the last five years. There is a rural bank branch in the village, the Dena Gujarat Grameen Bank, but it has no ATM - the nearest ATM being still located five km away. Since, unlike Akodara, the village still remains dependent largely on cash, demonetisation has hit Daramali hard. But the panchayat has improvised. The rural bank has not been getting any cash since demonetisation happened, but the panchayat has ensured that all shopkeepers deposit their cash earnings in the bank daily so as to keep up a semblance of money supply. Shopkeepers have been directed to pay their suppliers only by cheque. "We want to go cashless, but it is not easy," says Ankur Desai. ~