*In the magazine story below that went to press on January 11, BT wrote GVK Power & Infrastructure had issued a notice to exit the Shivpuri-Dewas highway four-laning project. On January 14, the company informed the Bombay Stock Exchange that it had decided to walk away from the Rs 3,000 crore project.

The GMR Group ended 2012 on an unhappy note, losing a lucrative airport project in the Maldives in December. It has not exactly begun 2013 on a good one either, walking out of the Rs 7,700-crore Kishangarh-Udaipur-Ahmedabad highway project in the first week of January. However, while the exit from the Maldives was involuntary and painful, the Bangalore-based infrastructure group may well be relieved at quitting the highway project.

The 555-km-long stretch between Rajasthan and Gujarat, the first mega project in the country, is stuck because of delays in environmental approvals. 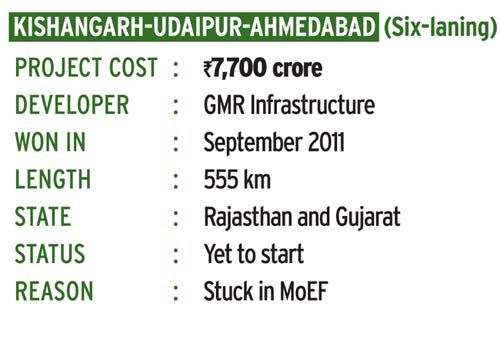 GMR is not the only group affected by such delays. *Hyderabad's GVK Power & Infrastructure has also issued a notice threatening to walk out of the Rs 3,000-crore Shivpuri-Dewas four-laning project in Madhya Pradesh on similar grounds. The cancellations have led to a blame game between the National Highways Authority of India (NHAI), the nodal agency for highway development in India, and the Ministry of Environment and Forests (MOEF), without whose assent no project can go ahead.

The malaise of delays is not restricted to roads but affects projects in several other sectors, power and mining prominent among them. According to an NHAI official, there are 22 projects awaiting final clearance from the MOEF. Sector experts reckon that execution will continue to suffer unless the approval process is speeded up.

"The MOEF cannot issue final clearance unless it gets forest clearance, which has to come from the state concerned." A new rule effective from April 2012 makes forest clearance mandatory for highway projects. NHAI is keen to have GMR execute the Kishangarh-Udaipur-Ahmedabad project. "We will do everything possible to save the project, or seek legal remedies," says J.N. Singh, Member (Finance), NHAI. But the company may not be interested. GMR has already filed a suit to protect its performance security of Rs 270 crore from being forfeited by NHAI. "We had deployed about 300 employees for the project and opened three offices in two states," says a GMR spokesperson. The company had achieved financial closure and infused equity of Rs 700 crore into the project. Engineering, procurement & contract (EPC) orders worth Rs 2,800 crore had been placed with Larsen & Toubro.

Meanwhile, the highway authority is lobbying to get forest clearance delinked from environmental clearance, so that road projects in non-forest areas can go ahead. "Where is the major forest in Kishangarh-Udaipur stretch," says a disappointed NHAI official. Environment Minister Jayanthi Natarajan, however, is not in favour of such delinking, and wants both clearances to go hand in hand. NHAI has now moved the Supreme Court seeking an exemption for road projects from the rule that forest clearance precede environmental clearance.

Risk of Countercharges
Interestingly, the moment GMR's decision to exit the Kishangarh-Udaipur-Ahmedabad project became public, Edelweiss Securities put out a flash note with a buy recommendation on the stock, perceiving it as a positive development. "Once, the termination is finalised, a stake sale in the road vertical will also be easy and at a better value as almost all the projects are operational," says K. Shankar, an analyst at Edelweiss. "The only risk is countercharges or severe penalties by NHAI for terminating the project." The brokerage has set a target price of Rs 35 for the GMR stock. The company's shares ended Friday, January 11, at Rs 20.40.

GMR operates six highway projects and is currently building three more. The group's highways business - it also has interests in airports and power - earned Rs 406 crore from tolls and annuity revenues and delivered a net profit of Rs 41 crore in 2011/12. In terms of profitability, the segment is the best performer for the group, recording an EBITDA (earnings before interest, taxes, depreciation and amortisation) margin of 85 per cent. 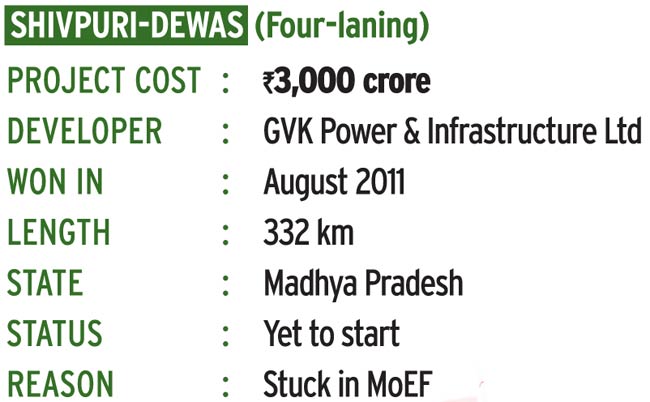 Industry watchers say delays in government approvals are not a new trend, and developers will stay the course if the projects they bag hold good prospects of profitability. But from the outset, market analysts had felt the Kishangarh-Ahmedabad project was an expensive, unviable acquisition in view of the Rs 636 crore premium GMR had agreed to pay every year. Running the project over its 26-year duration would have meant paying that premium every year to NHAI, with an annual increase of five per cent.

In recent years, many developers have made aggressive bids to snap up projects in the hope of selling stakes or exiting later. The head of an unlisted infrastructure firm even claims that some companies have participated in public private partnership (PPP) project bids with the sole aim of building a stronger order book and boosting their shares. Of the 49 bids awarded earlier by NHAI, 32 fetched a premium of about Rs 3,000 crore.

"Developers are calculating their bid premium based on speculative factors such as traffic volumes and how early or late various approvals might come. In a PPP project bid, developers should rely on efficiency factors, not speculative factors," says Manish Agarwal, Executive Director, at consulting firm PricewaterhouseCoopers India. However, a stakeholder in the highways sector noted that it was also possible for developers who bag projects to later find them unviable and look for ways to get out of them.

NHAI could follow the example of Power Finance Corporation (PFC) in awarding projects and ensuring there were no problems later, say analysts. PFC sets up a shell company, obtains all the requisite clearances, and then invites competitive bids. This was how it awarded the 4,000 MW ultra mega power projects in Sasan, Mundra, Krishnapatnam and Tilaiya. Had NHAI done the same, GMR and GVK may well have opted to go the distance with it.

The only silver lining is that GMR and GVK's response may force the government to streamline the approvals process and kickstart stalled projects.