A new breed of brokers is making the home buying experience cleaner and smoother than before.

We prefer hiring people from banking, insurance, hospitality and media: Amit Mavi
Last year, Santosh Narula, 38, a flight dispatch manager with IndiGo Airlines, decided to buy an apartment. He was reluctant to approach the usual neighbourhood brokers, given their dubious reputation. So he searched online for an alternative and found IndiaHomes, one of a new breed of property agents who insist they are committed to clean, transparent deals. The company found him just the place he was looking for: a two-bedroom flat in a housing complex called Ridge Residency in Noida. "I was not sure whether to buy my flat in Faridabad or in Noida, but IndiaHomes advised me correctly," says Narula. "I am glad I chose Noida, as my property's price has already risen by 25 per cent."

Tales of shifty brokers shortchanging home buyers, promising the moon but delivering far less, preferring to deal extensively in cash rather than cheques, often working in league with dodgy developers, are legion. There are around 200,000 brokers in the country, and most of them inspire anything but trust. "One can become a property agent without any registration or certification," says Getamber Anand, Vice President of the Confederation of Real Estate Developers' Associations of India (CREDAI). "There is no accountability to either developer or customer." 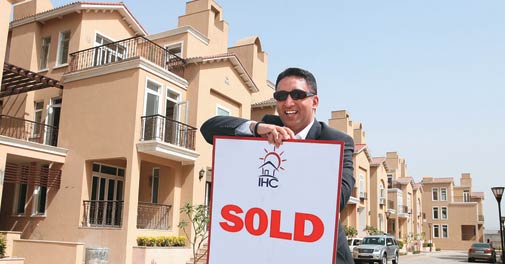 The first thing people ask is 'why should I trust you'. We take pains to win that trust: Samarjit Singh
But lately a new breed of brokers has emerged, who want to break out of this image. "The first question customers ask is: 'Why should I trust you'," says Samarjit Singh, Founder and Managing Director, IndiaHomes. "So we take special pains to ensure we win their trust."

Leading the pack are Investors Clinic and Better Option Propmart (BOP), which notched up revenues of Rs 148 crore and Rs 150 crore, respectively in 2011/12. The bulk of their earnings came from residential properties.

The former was started by brothers Sunny and Honey Katyal from Moradabad, Uttar Pradesh, in late 2006, when they sensed a big opportunity in the flurry of construction activity that had begun in the National Capital Region (NCR). "There was an opportunity to remove unethical practices and institutionalise the industry," says Nishant Singhal, Director, Strategy, Investors Clinic. It was the same spur for Amit Mavi who set up BOP in early 2007. "Residential properties promise much more to investors, 15 to 18 per cent, while in commercial ones, the margin is seven to eight per cent," says Sumit Ghosh, Vice President, Marketing, BOP.

In their wake came others. There is IndiaHomes, the reincarnated face of Agni Property, which began in 2008 as a traditional property agent, but which in early 2010 decided to concentrate on the primary home market - selling only newly built residential properties. It had revenues of Rs 26 crore in 2011/12. There is also AllCheckDeals, with revenues of Rs 17.5 crore last year, whose very name incorporates the credo that it accepts payments only by cheque. It is part of the Sanjay Bikhchandanipromoted Infoedge Group, which runs a string of classified ad sites, Naukri.com the best known among them. "We got the idea in 2005 following a host of calls from non-resident Indians who wanted to buy homes in India, but without the usual hassles," says Satyajit Tripathi, Business Head of AllCheckDeals.

"But we got started only in 2007." Then there is PropTiger, started by Prashant Agarwal in February last year, which, like IndiaHomes, focuses solely on homes. Financial services player Unicon too launched Unicon Real Estate in 2006, which has so far sold 15,000 residential units and contributes 35 per cent to the group's revenues. "The idea was to offer real estate services from a company which already had some brand equity in stock broking and insurance," says Gajendra Nagpal, CEO and Founder of the group.

So what do these new-age brokers do differently? For one, they all prefer clean, cheque only deals. For another they have all set up portals to make the property buyer's search experience easier. The portals list every property the company is selling, along with its specifications.

IndiaHomes goes a step further than the others by also assigning every property on its site a 'vaastu score' and a 'neighbourhood score'. The vaastu score is arrived at after evaluating the site on 10 parameters related to traditional vaastu principles, while the neighbourhood score is calculated on the basis of the apartment's distance from the nearest parks, schools and hospitals.

These brokers also appraise developers carefully before starting to sell their properties. "We do numerous meetings with the builders, get feedback from our sales people and even speak to the media for more details," says Puneet Bhardwaj who heads IndiaHomes's Business Development team for NCR. "The accounts department checks out the builder's balance sheets." Many builders have failed to make the grade. "Of the 5,000-odd developers in the country, only 10 per cent will pass our due diligence process," says Bhaskar Bagchi, Chief Operating Officer, IndiaHomes.

Most of the salespersons traditional brokers employ are not on their payroll but are paid a commission for every property they sell. They are thus solely concerned with netting customers, often exaggerating the virtues of their properties; once the customer has paid up, they are rarely available. The sales force at most of the new broking firms, however, are all full-time employees, and thus much more accountable.

Employees are also usually more qualified than those in the business earlier. "Builders can expect clean deals from these brokers who are hiring MBAs and investing in training," says Kunal Banerji, President, Marketing, at realty company, M3M. Indeed, some of them prefer to eschew the real estate sector entirely. "We prefer hiring people from banking, insurance, hospitality and the media," says Mavi of BOP.

Private equity and venture capital firms have taken note. In August 2010, IndiaHomes raised $12 million from Helion Venture Partners and the Silicon Valley-based Foundation Capital. A second round of funding of $4 million from the same investors followed in February last year. PropTiger has got funding of $5 million from SAIF Partners and Accel Partners. "A number of players are trying out different models," says Mukul Singhal, Vice President, SAIF Partners. "Over the next year or so, we will get to know who the clear market leader is."

The hub of the new-age brokers' activities remains the NCR, where more new homes are being built than anywhere else in the country. Global property consultancy Knight Frank estimates there are around 500,000 housing units in various stages of construction currently in this region, which is more than the number of such units in Mumbai, Chennai, Bangalore, Kolkata and Hyderabad put together. But lately these brokers have been looking beyond as well: Investors Clinic now has a presence in 20 Indian cities and towns, and hopes to soon cover 20 more. PropTiger has offices in eight cities, IndiaHomes also covers Mumbai, Kolkata and Bangalore, while BOP, apart from expanding to various Uttar Pradesh towns, opened an office in Mumbai too last year.

Some sceptics, however, believe it is too early to commend these brokers unreservedly. "All brokers are driven by commissions," says Samir Jasuja, analyst at real estate research firm, PropEquity. "Organised brokers are no doubt coming in, hiring educated people and trying to enforce systems and processes, but there is still some lack of transparency for the buyer." Still, these brokers have taken an urgently needed first step in a new direction, and home buyers can only hope they will continue along the same path.