Will Honda Brio resurrect the brand in India?

In Italian, the word means lively, cheerful, energetic. Will 'Brio', Japanese carmaker Honda Motor Company's latest offering in India live up to its name at the sales counter? It's Honda's first venture into the crowded Indian small-car segment, at a time when the company needs to arrest the dip in its sales.

(From left) Seki Inaba, Director, Sales and Marketing, Jnaneswar Sen, Senior Vice President, Sales and Marketing, and Takashi Nagai, President and CEO, at the Honda Siel plant in Greater Noida
N. Madhavan
In Italian, the word means 'lively, cheerful, energetic'. Will 'Brio', Japanese carmaker Honda Motor Company's latest offering in India live up to its name at the sales counter? It will be Honda's first venture into the crowded Indian small car segment, at a time when the company needs to arrest the dip in its sales.

The demand for every one of Honda cars has fallen in India. Sales of Jazz, Civic, Accord and CRV all fell by over 40 per cent in the first four months of 2011/12, while those of its popular City sedan declined by 20 per cent. Honda Siel Cars India Ltd - a joint venture between Honda Motors and Siel, a Siddharth Shriram Group Company, cut the price of City by over Rs 60,000 in June. The price of Jazz was cut by about Rs 1.50 lakh.

MUST SEE: Top cars in your budget Rs 3-8 lakh

Honda's problems were compounded by a disruption in the supply of critical components from Japan following the killer tsunami in March. This meant that for a few months, its facility in Greater Noida on Delhi's outskirts could operate at only 60 per cent of its capacity of 100,000 cars a year. Its cup of woes overflowed earlier this month when Honda Siel had to recall 72,115 City models to replace a faulty power window switch. This was the third such recall in the last 20 months. Honda's reputation for reliable and quality products took a severe knock.

Click here to Enlarge
But the biggest roadblock Honda cars have faced is India's diesel subsidy. The retail price of petrol has risen 33 per cent in the last 16 months, while the cost of diesel increased by just eight per cent. This significant price differential has triggered a sudden but substantial shift in preference among car buyers for diesel vehicles. The extent of this shift is staggering - 90 per cent of SUVs and luxury car buyers have preferred the diesel variant; so too have 70 per cent of those who bought sedans and 60 per cent of those who went for compact cars.

The problem for Honda is that it does not have a diesel engine that fits the needs of the Indian market. It has a 2.2-litre diesel engine for the European market but that cannot be adapted for Indian cars because of the higher sulphur content in the diesel used here. While rivals such as Volkswagen, or VW, General Motors, or GM, and others which brought out diesel variants, have seen their sales rise - GM's sales of Optra and Cruz rose 23 per cent in the first four months of 2011/12, VW sold 50 per cent more Passats - Honda Siel finds itself left behind.

Moreover, the company has no immediate solution in sight. "We have no concrete plan yet for a diesel engine. It is being developed in Japan and will take some time," says Seki Inaba, Director, Sales and Marketing, Honda Siel.

The problems, however, are not entirely external. A lack of strategic vision within the company is also apparent. While Honda has produced some of the best cars in the world, it has repeatedly failed at appropriate pricing of its products in India.

Once cars with higher import content were launched, adverse exchange rate fluctuations forced the company to price them high. Jazz is a typical example. Launched in June 2009. the model, which has 26 per cent imported content, was priced at around Rs 7 lakh - at least Rs 2 lakh higher than other cars in its segment.

But that is changing slowly. After 12 years in India, Honda Siel realised the virtues of localisation, and set up a research and development centre in 2009 to procure components locally and share components across its product range. "Honda is conscious of the importance of localisation in a price-sensitive market like India," says Takashi Nagai, President and CEO, Honda Siel.

The returns have been quick. "The price reductions we made for City and Jazz recently were possible because of localisation and parts sharing," says Jnaneswar Sen, Senior Vice President, Sales and Marketing. Jazz, for instance, shares 60 per cent of its components with City and 20 per cent with Brio.

"The recent massive price cuts speak volumes about how Honda lost out in the past," says B.V.R. Subbu, former President, Hyundai Motor India Ltd. Though Honda makes small cars in Japan, it took time to enter the Indian compact car segment. Brio, like any other small car, brings distinct advantages to Honda Siel. 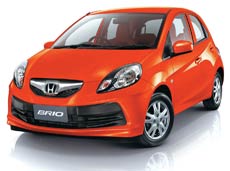 Honda Brio
The economies of scale the car generates will lower component costs across models. Jazz too has benefited from it. The higher volume catalyses localisation and also opens up new revenue streams like exports. "Honda Siel has started exporting knocked down parts of Brio to Thailand this year. We have even set up an export department at our Tapukara plant in Rajasthan," explains Nagai. Also, fixed cost gets absorbed over a larger base and provides scope for lowering prices further if required.

Brio has already been launched in Thailand. But supplies were affected following the tsunami and it is too early to gauge its success there. Brio widens Honda's reach too. "Today, we cater to just 20 per cent of the market in terms of volume as dealerships in small towns are unviable without a compact car," says Sen. "With Brio, we will cater to a larger customer base, which will also help sell our premium products."

Subbu feels that Honda's attitude has altered in the past year. "The unbelievable arrogance it displayed earlier has been replaced by pro-activeness," he says.

This, coupled with Honda's brand pull and aggressive pricing of Brio, could see the carmaker doing well, he believes. Brio has all the attributes of a Honda product but comes with a local content of 80 per cent. On a 100-km test drive, BT found the car manages contradictions well. It looks small from the outside but has a strong presence on the road.

While externally compact, its l ow-seating and efficient packaging offers sufficient space inside for five passengers. The 1.2 litre i-VTEC petrol engine generates 90 bhp at 6,000 rpm - the car is steady at 110 km per hour - but still offers good fuel efficiency.

The fuel mileage meter showed 13.1 per km even while wading through city traffic. A light steering, small turning radius, better overall visibility and low weight make it an ideal car for city roads.

The company has got the product right, but the pricing will hold the key to its future in India. Honda has said Brio will be priced below Rs 5 lakh. How much lower is the question. "If they price it between Rs 3.75 and 4.20 lakh, the car will be a hit," says Subbu. By pricing Brio at i-10 levels, Honda Siel can also partially offset the disadvantages it faces from the 'dieselisation' of India's car market.