How Apparel Firms are Doing Their Bit for the Environment

Bootstrapped start-ups from India are leading the transformation from environmentally degrading fast fashion to a slower fashion cycle. Here's how they are making it fashionable

FASHION FORWARD: Many textile and apparel start-ups in India are exploring ways to make a difference by adopting sustainable practices and a slower fashion cycle

when 36-year-old Sujata Biswas and her sister Taniya quit their corporate jobs in 2016, little did they know that they were on the path to starting one of the most successful sustainable clothing brands in India, which today has an annual turnover of Rs 50 crore. Suta, a combination of their initials—which means thread in Sanskrit—was born out of their love for sarees, and sustainable daily habits. “Sustainability is a part of how we grew up. Our mother would get fabric from artisans and stitch clothes herself. As a family we never over-consumed, and practised such a lifestyle even before we knew it was called sustainability,” says Sujata Biswas, Co-founder of Suta.

For Biswas, sustainability is a process and not the destination. In a country where more than 1 million tonne of textiles are discarded every year, brands like Suta are more than a necessity. According to a 2019 McKinsey report, India is set to become one of the most attractive markets for apparel with more than 300 international fashion brands expected to open stores here by 2022-23. This can’t be good news from a sustainability perspective since the fashion industry is considered to be the second-biggest consumer of water, according to the UN Environment Programme. For instance, consider the pair of jeans you’re wearing. It takes 3,781 litres of water to make a single pair of jeans, starting from production of cotton to its retail delivery. That’s enough water to sustain a family of four living in a drought-affected African nation for more than a year.

Mumbai-based Suta is not only moving towards ethical production, but also employing more than 16,000 local weavers and artisans across the country from Uttar Pradesh to Odisha, and from Kashmir to Tamil Nadu. “It’s not just about a sustainable product, but a process. It’s about hiring local [talent], treating them well, getting office spaces with more natural sunlight, upcycling, nurturing animals affected by a fast-fashion cycle, etc.,” Biswas explains.

Like Suta, many other start-ups are exploring ways to make a difference in the fashion industry. According to a report by the Indian Chamber of Commerce (ICC), domestic demand for fashion fuelled by the rising income of middle-class consumers is growing exponentially. “Per capita expenditure on apparel is expected to reach Rs 6,400 by 2023, from Rs 3,900 in 2018,” the report states.

International fast-fashion brands such as Zara, H&M, and Marks & Spencer, among others—which introduce more than 50 ‘micro seasons’ a year to entice consumers to change their collection every week—have fuelled the unsustainable consumption rate and demand growth for apparel. The business model is built around short runs of products that are not repeated, which means they only produce what the customers demand, but in a limited quantity. This fit-to-demand model ensures that there is rarely any surplus, but it also means that demand is kept alive for newer products, fuelling the unsustainability of fast fashion. 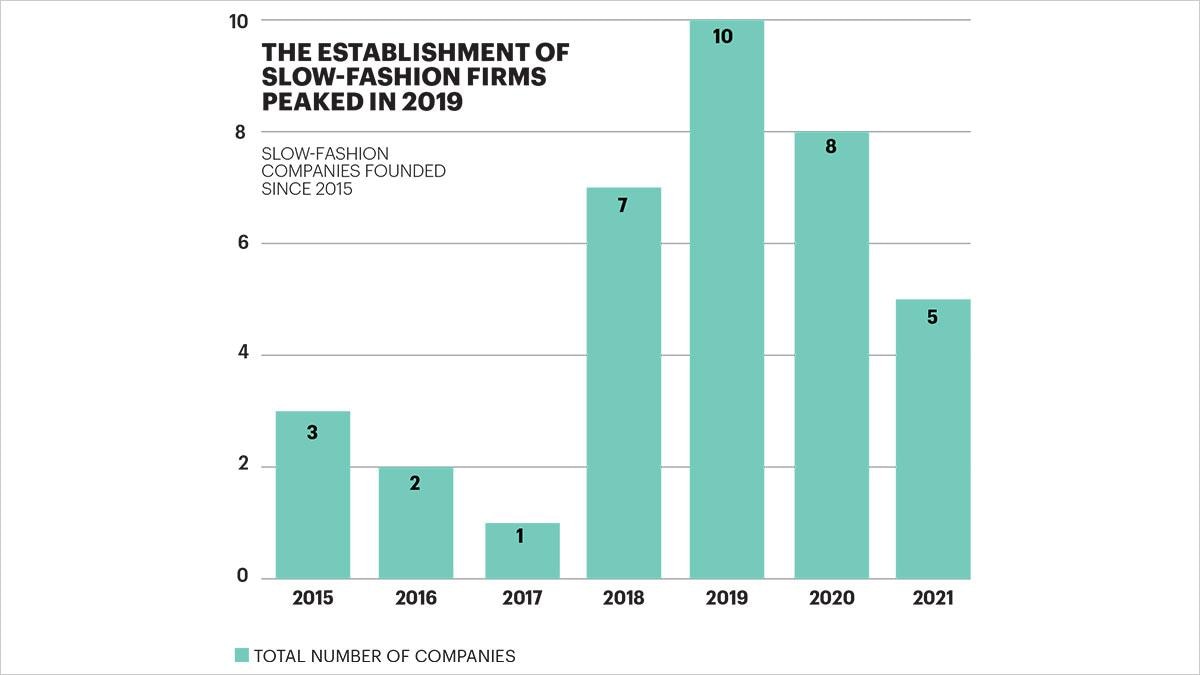 But slowly, these mass-market brands have started to undertake measures towards sustainability following the popularity of niche sustainable brands. “Zara and Inditex, our parent company, create and produce fashion that people desire, and we do so in an increasingly sustainable way. Our business model is interesting since we are known for not advertising, and the model is based on producing strictly what the customers demand. This fit-to-demand model ensures that we make what is required, rather than push to sell what is made,” a senior Zara spokesperson told Business Today.

The company adds that it is increasing the use of more sustainable materials, better textile processes and promoting circularity. “We are committed to ensuring that 100 per cent of the cotton used in our garments will be more sustainable, organic, or recycled from next year. In addition, polyester and linen used in our products will be recycled, or come from more sustainable sources by 2025,” the spokesperson adds.

There’s pressure on bigger brands due to the environmental, social and governance (ESG) movement, says Anand Ramanathan, Senior Partner at Deloitte India. “Start-ups like Bombay Trooper are niche but globally relevant, but even large fashion houses will eventually move towards it [ESG]. They’ll both move in tandem, and local brands will always be more relevant,” he adds. Highlighting the ways in which the value chain can be made more sustainable, he says that processes like traceability of sourced products, crop growing patterns, smart manufacturing processes to reduce wastage, and D2C e-commerce can be reimagined using innovative technology.

Navin S. Rao, Co-founder of women’s loungewear brand The Kaftan Company, agrees. From selection of natural and non-animal-based fabrics to digital printing and sustainable dyeing methods, he calls sustainability a work in progress, and talks about experimenting with new-age fabrics made of hemp and bamboo fibre, along with 3D printed textile. “We don’t churn out products at the same rate as some fast-fashion brands. Some initiatives are being taken that claim they’re doing a lot of things, but it’s one thing to say it, and another to practise it. There’s a change, but it will take some time, especially because of the sheer volumes we’re talking about,” he adds.

Rao and many other start-up founders like him stress on the need for standardised certifications to identify and incentivise production of sustainable clothing, and they put the onus of introducing such a mechanism on the government. Currently, there are certifications such as the B Corp Certification, which certifies that a business is meeting high standards of performance, accountability and transparency on factors like employee benefits, ethical supply chain practices, and input materials used. There is also a vegan certification provided by PETA. The Aditya Birla Group, too, gives out a LIVA tag to garments made out of fabrics derived from natural cellulose fibres. These fibres are produced using three to four times less water from wood pulp, which is sourced from trees grown in specifically designated forests.

“The main reason for the surge in sustainable fashion is the increased awareness of eco-friendly practices. Nowadays, more brands are producing sustainable clothing. From the use of plant-based textiles and bacteria-based dyes to a blockchain-based supply chain to increase transparency, we aim to stay sustainable at every step of the way,” says Manmohan Singh, Head of Business Development at Birla Cellulose.

In 2019, the central government launched Project SU.RE—short for sustainability resolution—to push the textile industry towards fashion that contributes to a clean environment. Around 16 of India’s top fashion retailers including Lifestyle, Shoppers Stop, Future Group, and Aditya Birla Retail pledged to source and utilise a substantial portion of their total output using sustainable raw materials and processes by 2025 under the SU.RE initiative. Industry players, meanwhile, say a more concerted effort from the government is required for ethical clothing.

Deloitte’s Ramanathan cites the example of government-run Khadi and Village Industries Commission to explain how a mass-market sustainable product can be produced and marketed. “The critical driver is going to be skill-building, like the government has done through the vocational programme for khadi. It has to happen at scale,” he adds.

Experts say that there are three fundamental checkpoints to call a product sustainable: one, it has to be made from raw material grown sustainably, or recycled. Second, the product’s carbon footprint, right from its source to where it’s sold and how it compares with the industry average, has to be lesser. And third is its post-sale utilisation and disposal at the consumer level.

Suta’s Biswas says that digital technology has been a boon for brands like hers to keep their product lifecycle sustainable. Suta Earth—an initiative run by her company—makes bags out of torn/stained sarees that would have otherwise ended up in a landfill. Another initiative of the company is of reselling products, where customers can resell Suta products at around 80 per cent of the MRP, and all this is managed through the company’s digital presence. “Digital channels like Instagram and Facebook are very important. We started as a Facebook page. The cost of acquisition of a customer is much lower when it happens via a digital medium,” she says. Despite these initiatives and resolutions, the fashion industry remains one of the most polluting across sectors and geographies. A 2017 Changing Markets Foundation investigation found that factories in Indonesia, China and India were dumping highly toxic wastewater into local waterways, destroying marine life, and exposing workers and the local population to harmful chemicals. It further revealed the links between polluting factories and major fashion brands including H&M, Zara/Inditex, ASOS, Levi’s, Tesco and UCB, among others.

Not much has changed with respect to the polluting tendencies of the fashion industry since then. According to the Business of Fashion-McKinsey State of Fashion 2022 report, the industry accounts for approximately 2.1 billion tonnes of CO2 emissions per year—that’s 4 per cent of annual global emissions. More than 70 per cent of these emissions come from production processes, with the remainder coming from retail, logistics and product use. Some 125 companies—including brands like Levi’s and H&M—have committed to net-zero greenhouse gas emissions by 2050 through the UN Fashion Industry Charter for Climate Action launched in 2018, the report states. “Most public commitments made by fashion brands in the run-up to COP26 were to reduce emissions by 30 per cent by 2030 (from 2015 levels or later). Some companies, such as Levi Strauss & Co., have committed to reducing emissions across their supply chain by 40 per cent by 2025, while others, such as H&M, are striving to be ‘climate positive’, reducing more greenhouse gas emissions than its value chain emits, by 2040,” the report adds.

Surrounded by such challenges, companies in India are trying to lead the way but it’s an uphill battle with a dearth of funds, experts say. In 2017, only 1-2 per cent of investments in climate adaptation projects for textile manufacturing came from the private sector globally. This number needs to grow 10 times by 2030 for developing countries alone. Despite India being among the top five apparel markets, and a global hub of manufacturing fast-fashion garments that are exported to Europe and the US, it’s the bigger brands that need to take the initiative and make some real impact, experts add.

They also say that India has a unique advantage when it comes to sustainable clothing adaptability due to its historical and cultural practices. Among the key reasons that they point towards, to explain the growth of sustainable clothing in India, is its position as a big hub for production of apparel and textiles, which brings in a lot of learnings and standards from other markets. And from a demand standpoint, the fact that natural fibres always had a market—and cultural conditioning—is a huge driver.