How AXON is putting HCL Tech in the big league

The story is about how an acquired company transformed the acquirer. The acquisition of AXON by HCL Tech had its share of drama. But, once  the two companies came together, HCL Tech was pulling AXON into every deal by deploying high-priced consultants. That helped the IT firm in reporting a significant revenue growth.

Vineet Nayar, CEO, HCL Technologies
Sunny Sen
In the summer of 2008, when the world was yet to be singed by the collapse of Lehman Brothers, Berkshire, UK-based AXON was looking to acquire an Indian information technology, or it, company. Known for its consultancy and high-end application implementation, but not so much for its size, it was keen to expand. A typical Indian it company, with strengths in low-end services, made for a perfect fit. The problem was valuation. In those pre-crisis days of heady growth, the valuation of Indian IT companies was so high that it nipped AXON's ambition in the bud. Not to be denied, AXON opted for the opposite route to gain scale.

It agreed to be acquired. "The strategic objective was achieved, but the other way round," says Steve Cardell, who as the company's CEO presided over its acquisition by HCL Technologies, commmonly called HCL Tech. The acquisition had its share of drama. Infosys, which was keen on building a large consultancy practice, where margins are 20 to 30 per cent higher than traditional it services of application and infrastructure maintenance, offered Pound 407 million, or Rs 2,920 crore then, for AXON. In the closing moments, Vineet Nayar, Vice Chairman and ceo of HCL Tech, stepped in offering Pound 40 million more. "We gave Infosys little time to respond," he recalls. The deal was sealed on December 15, 2008. 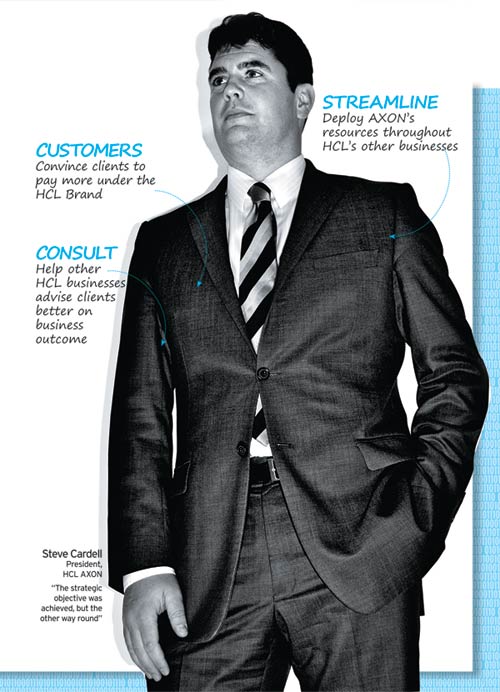 That was exactly three months after Lehman fell. By that time, the world had changed. Before you begin to yawn, this is not yet another story on how a company dealt with the global financial meltdown. It is about how an acquired company transformed the acquirer.

MUST READ: HCL Tech to create 80 IT jobs in Dublin

Reaching for the Sky
Figuratively speaking, the AXON deal was about 44 months in the making. Nayar joined HCL Tech in April 2005 as President and soon knew that all was not right there. The company was growing at a healthy 30 per cent, but was not keeping up with the times. Nayar wanted it to join the global it royalty of ibm, Accenture and Capgemini - companies which provided high-end consultancy and reaped rich rates. "What really happened was a war cry: 'Let's beat ibm'," says Nayar. "Beat ibm and Accenture, because the Indian it players were not relevant in our scheme of things."

Big words, coming from a company that was, and is, outside the top four in India. But it was not about the size, nor about the rank in India. Nayar was desperate to break away from the league of Indian it companies, which provided generalised services under the "time and material" model - they were paid on an hourly basis depending on the number of people working for the client.

The only way to break out was by building the company on the lines of an IBM or an Accenture. What were they best at? How did they get the high-value work, which transformed the way their clients did business? Two years into his job, Nayar knew he could not build this capability internally; it had to be acquired.

Vineet Nayar, CEO, HCL Technologies
For HCL Tech, the consultancy practice was insignificant at that time, and growing at a snail's pace of one to two per cent every quarter. AXON, on the other hand, had mastered the art of engaging with clients' top management, understanding their business needs, engaging high-flying consultants, and then working towards transforming the business - very similar to what Accenture and IBM did. It was also very much what HCL Tech needed to join the big league.

Reverse Integration
Once the acquisition was complete, Nayar did something unique. In most cases, the acquired company becomes a unit of the acquirer or gets merged into it. Nayar chose to integrate HCL Tech's Enterprise Application Services, or EAS, business into AXON.

The AXON leadership was sceptical, but decided to wait and watch. Cardell spent the next week travelling to the company's offices across Europe and the United States with Nayar to convey the merit of the plan. That was important because of the different ways in which the two companies went about their businesses. AXON would take the premium services and slowly penetrate the client. HCL, on the other hand, would corner a large chunk of a commoditised business and try to move up to the premium end. 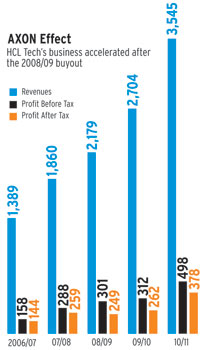 But these were the lesser challenges. The greater one was about pricing. "We had common customers, who were buying the sap practice from the old AXON business and HCL on remarkably different rate cards," says Cardell, now the president of what is called HCL AXON. In many cases, AXON charged twice as much as HCL Tech. The clever clients wanted old AXON services at HCL rates. Cardell and his team had their hands full trying to explain the rates. They would tell the clients about the high-end services and better results they would get for the higher price.

Once the two companies came together, HCL Tech was pulling AXON into every deal by deploying high-priced consultants. That created a new challenge. "We began losing money because we were providing high-end work," says Cardell.

How things have changed! Back then, HCL Tech's EAS business, which includes consultancy, comprised less than nine per cent of its revenues. That figure has grown to above 22 per cent today. Back then HCL Tech's client deal size was mostly below $50 million. In the quarter ended June 2010, it had six clients with billings over $50 million, which grew to 10 clients a year later.

Last quarter, an international travel and transport company wanted to change its business by overhauling its it system. AXON was at the forefront, dealing with the unnamed customer. A set of consultants studied the business and what the client wanted five years down the line. Then HCL Tech's other business divisions were brought in to maintain the applications and infrastructure. With the combined competence and cost, the 10-year deal worth $100 million was closed successfully.

One of AXON's largest clients was TXU Energy, a Texas-based utilities company. When the time came to renew its sap infrastructure contract, Cardell, who knew the TXU executives well, brought in HCL Tech's infrastructure division, and closed another deal worth $100 million.

These have been fitting repartees to sceptical voices among the analyst community when the acquisition was announced. They thought it was a bad idea. HCL Tech, with no high-end work on its plate, did not enjoy the credibility some of its peers did. The same analyst community now sings a different tune. "They have done it. To me it is remarkable," says it advisory firm Everest Group's ceo, Peter Bendor-Samuel. Forrester and Gartner today rank HCL Tech in the Leaders' Quadrant, along with ibm and Accenture.

The Road Ahead
Don't be surprised if you hear about Nayar riding a Harley-Davidson to Ladakh. An adventurer at heart, he did not panic when things did not go too well in the first six months of acquiring AXON. Trouble broke with HCL's eas team refusing to report to AXON's executives. But Nayar stuck to his integration plan. And the results vindicated him as HCL Tech's share of the market grew 50 per cent in the three years that followed.

Peter Bendor-Samuel, CEO, Everest Group
Cardell was also careful not to engage AXON in every one of HCL Tech's deals. That would have diluted the brand and pricing. He took AXON's capability to HCL's customers one by one, testing the waters with, to begin with, just five clients. AXON helped HCL Tech understand its clients' needs better. "There is a mindset change," says V. Ramakrishna, Senior Corporate Vice President and Chief Delivery Officer at HCL Tech.

But a lot remains to be done. "Indian companies have not been able to penetrate Central and Continental Europe," says Sid Pai, Managing Director of tpi India, an it advisory firm. "AXON covers these areas as well."

But Nayar and Cardell are not done yet. Seventy-eight per cent of HCL Tech's revenues still come from low-end services. It is still far behind IBM and Accenture. Nayar believes that in four years HCL Tech will morph into a consultancy-oriented company. "I will do things my way as long as my ways are relevant. The day they are not, it is time for me to go," he says. Looks like that Harley trip to Ladakh will have to wait.