How Bandhan Bank has changed the lives of people.

CHANDRASEKHAR GHOSH CEO & MD, BANDHAN BANK "I realised that the only way to bring down (lending) rates was to get cheaper funds ... that is why we applied for a universal bank licence" Photo: Shekhar Ghosh

On the first day of its operations - August 24, 2015 - Bandhan Bank had 450,000 people queuing up for opening accounts with it. This was an amazing start for a new bank, but it also caused problems as Bandhan had not expected such a windfall. "The first 15 days were terrible for us, especially our IT team," says Chandrasekhar Ghosh, CEO and Managing Director. "We had estimated only 200,000 odd account openings in the first month. But it also showed how well Bandhan is known to people." Bandhan Bank may be just 16 months old, but as a microfinance institution (MFI) since 2001, it had long acquired a formidable reputation as a change agent helping the poor climb out of poverty.

The evidence is visible all over West Bengal. Take Aparna Dhar, 42, resident of Sankhabanik Coloni in Titagarh, Barrackpore, 30-35 km from Kolkata (where Bandhan Bank is headquartered). She started with a loan of Rs 5000 from the then MFI in 2004, which she used in buying and selling saris. Her promptness in paying back in time got her a loan of Rs 84,000 in 2013, which she used to buy a 'Toto', a six-seat battery powered 'e-rickshaw'. Her husband, Sumit, ferries passengers in the Toto, earning a steady income of around Rs 20,000 per month. She has paid back the loan and is now being given another Rs 1 lakh towards maintenance and improvement of her Toto. Short and confident, wearing a colourful salwar kameez with a big bindi on her forehead, this mother of two has higher ambitions. "I want to buy a car and use it as a taxi," she says. With her excellent credit history over 12 years, she is on the verge of graduating from the micro credit category - in which the maximum loan eligibility is Rs  lakh - to the small entrepreneur segment, where she can get a loan up to Rs 10 lakh.

Numerous others in Dhar's housing colony have similar stories about Bandhan's role in empowering them. Sankhabanik Coloni gets its name from 'sankha' - the white bangle, made from conch shells, which married Bengali women wear - and indicates the colony residents' traditional occupation. Deepali Sur, 44, for instance, Dhar's neighbour, who makes sankhas, earning around Rs 3,000 a month, began with a loan of Rs 7,000 from Bandhan in 2004, and has subsequently got another loan for Rs 55,000 to expand her business. Helped largely by loans from Bandhan, other residents have diversified into selling vegetables, groceries, saris or garments stitched on sewing machines bought on loan.

Another 10-12 km from Barrackpore, at Garulia, Shyamnagar, Bandhan has been backing self help groups. Bulti Burman, member of the self help group, Titalee, has a loan of Rs 15,000 from Bandhan, which she is using to buy and sell wooden planks for home construction. The loan, taken barely 45 days ago, has already helped her scale up, adding Rs 1,500 to her monthly income. Titalee, started in 2013 with five members, now has 37, all of them women, who meet every Tuesday to make their weekly loan repayments. Most of them sell either fish or, like Burman, material used to build homes. Shyamnagar has 149 groups like Titalee, with a total of 4,500 members who collectively owe Bandhan Rs 13 crore.

Bandhan loans to the bottom of the pyramid do not come cheap. The women at Titalee, for instance, pay 19.9 per cent interest. But no one's complaining because other banks would have had nothing to do with them. Ghosh notes that, but for Bandhan, his customers would have been paying far more exorbitant interest rates. "These are people who don't understand percentages," he says. "When I started out, I found people paying Rs 5 per day to moneylenders for a Rs 500 loan (an interest rate of 365 per cent a year). They were ready to do so because they got the money without questions asked. They were not in a position to provide guarantors or documentation. There was no alternative."

Even so, Ghosh always wanted to make life easier for his customers by lowering the borrowing rate. "I realised that the only way to bring down rates was to get cheaper funds," he says. As an MFI, Bandhan had to borrow from banks to service its customers, while as a bank it would have retail and bulk deposits at its disposal. "Two thirds of our total costs went in paying back the banks and the rest was operational costs," he adds. "It was not possible to bring down operational costs beyond a point. It had to be the borrowing cost. That is why we applied for a universal bank licence." In April 2014, among a host of applicants for new banks, the Reserve Bank of India chose to award permission to only Bandhan and IDFC. The bank opened for business after 16 months. Another 16 months later, Bandhan has 9.8 million customers with total deposits of Rs 20,500 crore. It has a capital adequacy ratio of 26 per cent, much higher than the country's banking average, and a loan book size of Rs 19,000 crore. 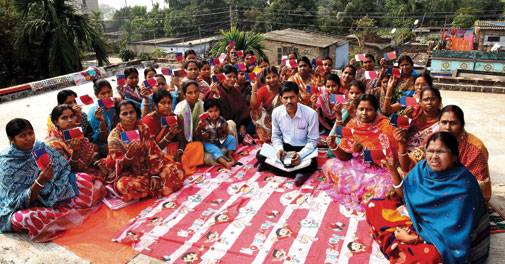 For Bandhan's MFI customers, its transformation into a bank has also provided them a place where they can easily open savings accounts as well. Titalee member Rumpa Das has done just that. She need not even travel to the bank to deposit her cash - she hands it over to the banking correspondent who comes every week to collect the interest payments due from loan customers, and gets her bank passbook promptly updated. "Even my husband does not know how much I have saved," she says.

But the makeover has not been easy. "The people working with us had never run a bank before," says Ghosh. "I realised even before our bank opened that a huge cultural shift would be required. We would have to make our existing staff adapt to the new norms. We would have to see to it that the new people we recruited did not compromise our core values." He ensured training sessions and also employed strategies. "The new employees, most of whom have bank experience, have been posted in the urban and metro branches we have opened," he adds. "Managers in the rural and semi rural branches are from the erstwhile MFI. It will take time for the new entrants to adapt to Bandhan's culture and for the old ones to change according to changed needs."

Bandhan Bank, moving beyond MFI activity, has also begun servicing the middle of the pyramid. Indeed many formerly poor customers have risen to middle status, helped by Bandhan. Santanu Sengupta and his wife Shubhra, residents of South Dumdum, Kolkata, who have been making and selling artefacts for the last 20 years, got their first loan in 2007 - a very modest Rs 7,000 from Bandhan. Till then, they were forced to manage with loans from friends and a cooperative society which charged 36 per cent interest. "What I like about Bandhan is that it gave us money without making us run from pillar to post," says Sengupta. ". No bank I approached gave me money." The loans from Bandhan, paid back in time, led to larger ones. After Bandhan turned into a bank, Sengupta got a loan of Rs 3 lakh in the small entrepreneurs segment at 17 per cent interest. So far, Bandhan Bank has disbursed Rs  640 crore to 34,511 small entrepreneurs.

In the Micro, Small and Medium Enterprises (MSME) category of Bandhan Bank's customers is Wow Momo Foods, a chain of fast food restaurants with over 100 outlets across seven cities. Bandhan has loaned it Rs 12.4 crore at 13.5 per cent interest to buy equipment and land for a base kitchen. "The big advantage of dealing with Ghosh and Bandhan is that they understand entrepreneurship," says Binod Homogai, Co Founder and Director, Wow Momo. "They know the difficulties start-ups face and go all out to help." In all, Rs 8,494 crore has been disbursed to 2.99 million customers in the MSME category.

Ghosh is keen to expand the bank's lending into new areas. "I want to get into gold loans, increase financing of second hand vehicles, loans to cab drivers, and affordable housing," he says. "I also want to grow the micro credit book by 30-50 per cent in 2017." Further, he has gone beyond banking to help his customers. Along with his wife, he has set up Bandhan Creation, separate from the bank, which will provide sale outlets for customised products made by his customers. "We will sell garments, artefacts and other products, using a model similar to Fab India," he adds.