There are three ways to make money on YouTube; the easiest is by signing up for Google AdSense - one who signs up gets 55 per cent of the advertising revenue from a video, while YouTube keeps the rest.

It's a regular Friday evening at the Starbucks outlet in Connaught Place. The place is packed to the brim, the crowd is chirpy, and the music loud. A lanky young guy in a hoodie walks in, a pair of red-rimmed glasses almost covering his face. Despite his attempt at being inconspicuous, heads start turning, followed by whispers and 'aha' moments. And soon, 'fans' surround him for selfies. While he handles all the attention with ease, it dawns on this reporter that interviewing India's fastest growing YouTube star, Bhuvan Bam, in public was not such a good idea. "It would have been worse without the glasses and the hood," says the 22-year-old, unassumingly. Bam is the creator of BB Ki Vines, launched in June last year, which has rather swiftly risen to become one of the most viewed-and-subscribed channels in India (see Hooked On). The videos he posts are two to eight minutes long, and usually depict the life of an urban teenager - on topics such as Valentine's Day, exams, parents, house help, girlfriends and teachers - replete with humour and bawdy overtones. His most-viewed video till date is Papa Maakichu, which has garnered over nine million views in just eight months. Bam has uploaded 87 videos so far, and makes Rs 3-4 lakh per video, on average. This millionaire YouTuber has fans even in the fraternity.

Tanmay Bhatt, stand-up comedian and Co-founder of YouTube channel All India Bakchod (AIB), says that Bam is, perhaps, the only one "making a killing" on the video sharing site. Reason: his is a one-man enterprise - he spends next to nothing while making the videos, as he shoots them from his own camera phone.

Not just comedy, channels have been mushrooming on YouTube across genres. Rajant Meshram, Head of YouTube Online Partnerships, India and Southeast Asia, says, "We are now seeing online creators break open the gates for a whole new kind of entertainment for Indians. Thousands of creators have emerged in India winning fans globally, in music, food, tech, kids and learning, among other categories."

Sanam Puri, Samar Puri, Venky S., and Keshav Dhanraj who started their channel Sanam in 2012, today, have over one million subscribers. They perform at live events, too. Sanam Puri, the face of the channel, has also sung for several Hindi films. 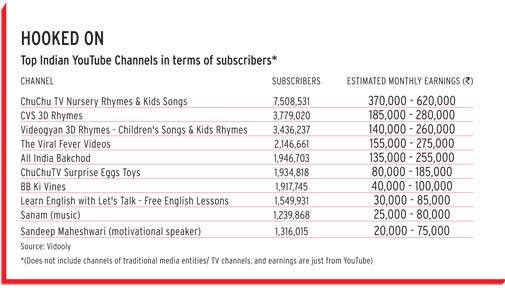 Although YouTube is known to have young audience, the content creators are not defined by age. Take the case of Nisha Madhulika, 57, who started out as a food blogger and turned to YouTube in 2011. Her simple North Indian food recipe videos are a hit across age groups. As her popularity grew, YouTube approached with a monetisation proposal. Her first cheque was for a meagre Rs 16,000; today, she earns a six-figure sum from the platform.

The popularity of Moradabad-based Dr. Vikram Yadav's YouTube channel is rather amusing. An active YouTuber since 2009, the physician has uploaded more than 1,500 medical videos so far on topics ranging from how to cure common ailments, and some as humdrum as how to remove blackheads, and pop acne - one of his videos on Black & White Heads On Nose has garnered more than 14 million views.

There are three ways to make money on YouTube; the easiest is by signing up for Google AdSense - one who signs up gets 55 per cent of the advertising revenue from a video, while YouTube keeps the rest. The rates vary depending on the number of viewers a channel has and the country it is from. Advertisers may either adhere to the cost per click model, in which the advertiser pays only when a viewer clicks on the ad, or the cost per view model, which requires that the viewer watch at least half the duration of the ad or 30 seconds of it (in case of longer ads). In India, the average RPM (rate per mille or cost per thousand) for YouTube is $6-7. Creators can also earn money through brand integrations in videos, and through sponsored videos. Some use all these means to generate revenue while others depend only on AdSense. However, only those who are very popular and get millions of views on their videos can expect to earn significantly through AdSense. "YouTube monetisation is much smaller than what a lot of people imagine it to be. It depends on how much we spend," says Scherezade Shroff, who has a fashion channel on YouTube with over 1 lakh subscribers. When she started her channel back in 2013, she didn't make much money. Now after three years, the investments have started to pay off. "It is a lucrative arrangement," Shroff claims, but it takes time - to establish yourself on the platform and gain subscribers.

The platform has nurtured several digital media entertainment companies and multi-channel networks that compete with the larger TV networks. Just like TV shows, these digital networks hire actors, and for monetisation depend on brand integrations and sponsorships. The Viral Fever (TVF), creator of the fiction web series such as Permanent Roommates and Pitchers, was launched on YouTube in 2011. Arunabh Kumar, its founder and CEO, had initially started the company as a production house. After constant rejection from TV networks, he started dabbling on YouTube. Today, it is the fourth most subscribed channel in India, has a 100 employees and, Kumar claims, is "bigger than MTV and Channel V in India". One that tops the list on YouTube is Chennai-based kids channel ChuChu TV. It is not only the most subscribed and most viewed original content channel in India, but also in the Asia Pacific region. The channel, which features animated rhymes and videos for kids, attracts a sizeable audience from the US, too. Its most-watched video Johny Johny Yes Papa has over 997 million views. The channel earns solely from AdSense.

"As someone who has browsed through a lot of YouTube videos, I can say that kids' shows are always going to be the biggest on the platform. Nobody is a better captive audience than children," Bhatt says. He is right; out of the top ten most viewed original content channels on YouTube in India, nine are kids' channels.

Unlike ChuChu TV, TVF and Culture Machine (the parent channel of Being Indian) rely heavily on revenues from sponsorships and brand integrations. Most of the content produced by these channels are of a quality akin to television shows, and require similar investments and resources. And hence, the revenue generated from AdSense is not enough to even recover the production cost. In the case of TVF, the brand integrations are conspicuous - Pitchers, for instance, was sponsored by Kingfisher Premium, and the brand was deftly weaved into the story line.

"You cant survive on just ads from YouTube. We carry out brand sponsorships, content syndication, and offer technology solutions to brands," says Sameer Pitalwalla, CEO of Culture Machine, which has raised $21.5 million so far in two rounds of funding.

AIB, which produced podcasts before moving to YouTube, also has an advertising wing called AIB Vigyapanti. "We integrate brands in our videos, make ad videos for brands and feature in videos for brands. So, we are a production company, a creative company and also ambassadors for brands," says Bhatt.

AIB signed up new media company Only Much Louder (OML) in 2014 as its management and production partner. The two parties co-own all the content produced by AIB. OML's focus, too, has shifted from live events - the annual 'NH7 Weekender' music festival is its marquee event - to digital content creation lately. It manages several YouTube stars such as Kanan Gill, Kenneth Sebastian, Biswa Kalyan Rath and East India Comedy, among others. "Today 40 per cent of our business comes from the content side; it was 5 per cent two years ago. In the next two years, we expect it to grow to 70 per cent," says Ajay Nair, Director of OML.

YouTube came to India in 2008, but the last two years have been the most significant for the video sharing site here. According to video analytics firm Vidooly, from 2012 to 2014, on average an Indian spent four to six hours a month watching videos. In 2015, the time spent grew to eight to nine hours, and now it has scaled up to 12 hours per month.

This has been fuelled by three factors: reduced data prices, increased smartphone usage, and lack of content for millennials on traditional media platforms. YouTube is seeing over 60 per cent of its traffic in India come from mobile devices - a percentage expected to grow as more people come online. As per estimates, YouTube has over 60 million monthly active users in India, and is growing at the rate of 25-30 per cent.

There are around 27,000 channels on YouTube in India (exclusive of personal YouTube accounts) including channels of traditional media entities, news publications/ magazines and brands. On average, over two million videos are uploaded by these channels in a month.

YouTube did not disclose its regional numbers, but Subrat Kar, CEO and Co-founder of Vidooly, says that YouTube has the majority share of online video advertising in India. "Last year, around Rs 1,100 crore was spent on online video advertising in India, and YouTube has around 70-80 per cent share of this market, which amounts to Rs 700-800 crore," he says.

With Facebook also encouraging original videos on its platform, a move that would impact YouTube, more millionaires could be in the making. ~