Iran oil supply to India continues, despite no payment

Iran continues to supply oil to India, though India has not paid it for months. No official word on how much India owes Iran is available, but knowledgeable estimates put India's outstanding for the past three months alone at over $4 billion or around Rs 18,000 crore. What if Iran turns off the tap?

Barrels of oil imported by India per day from Iran 426,000

An opaque slick of secrecysurrounds the controversyover India's payment for the crude it importsfrom Iran. The Reserve Bank of Indiastopped facilitating payments from December last year, following the US sanctions against Iran imposed a few months earlier.Indian officials are markedly reluctant to discuss the matter, while theIranian embassy turned down repeated requests for comments.

The two countries have held several rounds of talks to solve the problem, butmade no headway. At the end of the last fruitless two-day negotiation in May,the Indian government put out a bland media statement saying: "Both sidesagreed to continue their engagement in the matter."

But an Indian diplomat familiar with the talks hinted India was looking at the viability of diffusingpayment to Iranthrough a variety of currencies and institutions to sidestep the constraints.There are strong indications that Iran continues to supply oil asbefore, though there is no official confirmation. 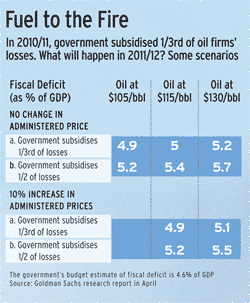 
No official word on how much Indiaowes Iran is available, butknowledgeable estimates put India'soutstanding for the past three months alone at over $4 billion or around Rs18,000 crore. A Deutsche Bank report suggests that the growth in India's oilimports in recent months has been modest precisely because Indian officials areaware of this mounting debt which will have to be repaid at some point - andperhaps at short notice.

There is little in India-Iran trade besides oil. Oil imports made up $10.19billion, or 88 per cent of India'stotal imports of $11.54 billion in the financial year 2009/10, according to theCommerce Ministry. But if Indianeeds Iran's oil, Iran, too, needs India. Indiais one of its biggest buyers, with about 10 per cent of Iran's dailyoil production being earmarked for it. Hydrocarbons in turn contribute 25 percent to Iran'sgross domestic product.

Strangely neither the stakeholders nor analysts appear unduly concerned aboutoil supply from Iranbeing disrupted. MRPL, the biggest importer, which brings in around 7 milliontonnes annually, recently paid an advance tax of Rs 97 crore for the April 1 toJune 15 period, which was 45 per cent higher than what it paid for the sameperiod last year. The advance tax paid is a pointer to company expectations forthe current financial year, and MRPL seems to have no worries of a suddencrisis throwing its financials out of gear. It also continues to get thehighest - or triple A - rating from credit rating agency ICRA.

Analysts are just as insouciant. While acknowledging the mounting bill, theynote that even if the supply of Iranian crude to India is disrupted, there arealternative sources.

"Saudi Arabiacould export to India,"says Ali Al-Saffar, Economist-Middle East at the Economist Intelligence Unit, London. "It willhave to double its current exports to India,adding an additional 400,000 barrels a day to make for the lost imports from Iran."

But the matter is not so simple. Iranian crude has high sulphurcontent, and is categorised as sour crude. The refineries processing it arerelatively inflexible and geared to handling sour crude alone. They are notequipped to switch from one kind of crude to another. Al-Saffar, however, saysSaudi crude is not very different in quality from that of Iran.

Some experts, unwilling to be named, also note that the complete silence ofboth the Indian and Iranian governments suggests there may be a lot to the oiltrade between the two countries that is not in the public domain.

The root ofthe problem goes back to June last year when, with Iran refusing to halt its uraniumenrichment programme, the United Nations called for stricter sanctions againstit. Within a month, the USpassed the Comprehensive Iran Sanctions, Accountability and Divestment Act, orCISADA, which sought to put the squeeze on Iran's earnings from petroleum.

Skirting the sanctions
With the dollar the medium of trade between most countries, barring specialarrangements, India-Iran dealings should have been immediately hit.

If it wasnot, it was because the two countries did have a special arrangement. This wasa body called the Asian Clearing Union, or ACU, set up in 1974 at the behest ofthe UN to promote regional cooperation, comprising the seven South Asian countries,Maldives and Iran.

Using theACU enabled India and Iran to bypassAmerican banks since it allows individual trade transactions between any twocountries to be offset against each other, with only the difference beingsettled in dollars or euros by their respective central banks.

It was too good to last. American sanctions were being made a mockery of. InDecember last year - significantly within a month of US President BarackObama's five day visit to India - the RBI announced it would not facilitate paymentsany longer through the ACU. This was being done since it could in no waymonitor the end use of funds routed through the ACU, and ensure they were notused for Iran'snuclear programme.

This left MRPL and HPCL - and the Petroleum Ministry by extension - in thelurch, ready to pay, but unable to transfer the money. A breakthrough seemedpossible in February this year, when Germanyallowed the money transfer to the European-Iranian Trade Bank in Berlin. But in April,under pressure from other Western countries Germany backtracked. One paymentmade was even returned.

No matter how it is resolved, the current payment problem could not have beenmore ill timed. Assured oil supplies are essential for India at a time when, not only do crude pricesremain high due to the continuing turmoil in West Asia,but global oil consumption is growing, threatening oil scarcity and stillhigher prices.

The global consumption of oil in 2010 grew 3.1 per cent to 87.4 million barrelsa day, while production grew by just 2.2 per cent, says the BP StatisticalReview in its latest report. "Globally, energy consumption grew morerapidly than the economy, meaning energy intensity of economic activityincreased for the second consecutive year," the review adds.

In a separate development, in late June, the US Federal Reserve lowered itseconomic growth forecast for 2011 from the 3.1 per cent to 3.3 per centestimate made in April. It is now between 2.7 per cent to 2.9 per cent. Thishas triggered speculation that the Fed could expand its balance sheet andunleash liquidity to spur growth.

An unintended consequence of a loose monetary policy of the US could be aspike in oil prices. The scenario gets bleaker given that the pace of economicactivity is slowing down in India, partly on account of the 10 rounds ofinterest rate increases since March 2010 by the RBI to rein in inflation.

The government's aim to complement RBI's anti-inflationary steps by restrictingits fiscal deficit - the borrowing that covers the gap between spending andincome - to 4.6 per cent of gross domestic product threatens to come undone ifcrude prices keep rising or oil supplies from Irandry up and Indiahas to go searching in oil markets elsewhere. Currently, public sector oilrefiners are losing Rs 289 crore a day by underpricing products like diesel,cooking gas and kerosene.

According to a survey of the Indian economy by the Organisation for EconomicCo-operation and Development, the energy subsidy in India is about $36 per person, andthe bulk of it goes towards lowering the domestic price of oil-based products. India's per capita oil subsidy is almost threetimes higher than China's,which makes the economy and society highly sensitive to the slightestdisruption in the flow of oil imports.