Young, talented Indians are developing them galore as the entry barrier is low. The developers don't need a sales force to market apps which can be put up at online marketplaces.

Goutam Das / Sunny Sen / Taslima Khan
Almost every time Siddhartha Banerjee used a taxi in Mumbai, he would catch the driver trying to charge him more than the actual fare. Banerjee, who had returned to India after a decade of working overseas, found it infuriating. The taxis all had outdated meters, and whenever he asked for a chart giving the equivalent current fare, the driver would produce a frayed, half torn paper chart, near-impossible to decipher.

Was there no easier way of figuring out the right fare? Apparently not, so Banerjee set himself the task of creating an app that would give the correct fare, and which could be accessed on an iPhone. 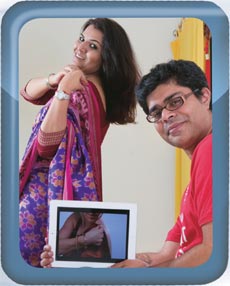 The number of downloads were sufficient for us to recover our investment in the sari app:Siddhartha Banerjee and Bhavna Sharma
But there was a big hitch. He had no idea how to go about it. Banerjee was no software engineer, but a commerce graduate who had worked in advertising. Undeterred, he hunted for books which would help him learn Objective-C, the programming language used to develop apps on iOS, Apple's mobile operating system. Rory Lewis's iPhone and iPad Apps for Absolute Beginners proved particularly useful. Banerjee, after two and a half months of intense study for 13 hours a day, produced Meter Down in August 2010.

It is a free app that provides accurate Mumbai taxi and autorickshaw fares against the corresponding meter reading and has been downloaded 80,000 times. Once is not enough. Enthused by his success, Banerjee and his wife Bhavna Sharma have created a second iPhone app: a step by step guide, using video, voice and text, to wearing a sari. Unlike Meter Down, this one is priced - at 99 cents - and is already a favourite among expatriates in India. "We invested Rs 2 lakh in creating the sari app," says Banerjee. "The number of downloads have been sufficient to help us recover the money." He now intends to start an app development company in June.

Banerjee's unlikely dream run illustrates the phenomenon apps have become in India. As he showed, the entry barrier is low: even rank outsiders stand a chance. Unlike traditional software products, apps do not need a sales force either to market them: they can put the app up at online marketplaces or app stores, and if followed up with some smart social media buzz, usually ensures a flurry of downloads. Click here to Enlarge
Take the app Iris, a voice assistant on the Android platform, similar to the Siri app available on the iPhone 4S. Developed by Narayan Babu and Binil Antony, along with four other friends who formed app development company Dexetra in 2010, it has been downloaded by two million users so far and answers half a million queries daily. And how did it come about? "One Friday evening, we decided we wanted to do something that was fun," says Antony. "We said if Siri can do it, so can we. We had the basic version of Iris out in just eight hours."

Mushroom Growth
From New Delhi to Nagpur, Salem to Sonepat, companies developing apps are mushrooming everywhere. There are about 9,000 of them in India at present, estimates Convergence Catalyst, a research firm, all seeking a slice of the $8.5 billion global app revenue pie. Another estimate puts the number of app developers in India at 250,000. A few have already won global recognition: Aadhar Bhalinge, for instance, won $20,000 in a World Banksponsored online apps contest with his 'Smart Rickshaw Network' app, which proposed employing rickshaw wallahs in developing countries to feed live traffic updates into a subscription service.

"It is very empowering," says Sharad Sharma, Chairman of the NASSCOM Product Forum, and a former CEO of Yahoo! India R&D. "Two or three people getting together can form an app development company. Most of the people consuming apps are young. They have a visceral feel for what their consumers will need. Many young people are transitioning from a service mindset - taking up jobs with big software companies - to doing products." 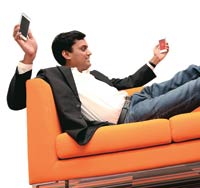 It was important to have our product team sitting in India: Vikas Saxena
There are converts from the service mindset as well. Nikunj Jain joined PWC after graduating from IIT Delhi, in 2010. But he found his job boring and soon quit. He then started an app development company, inoXapps, initially setting up office in his own east Delhi apartment with Rs 2.5 lakh from his savings.

Jain and his team developed a finger print security scanner app for Android phones - using the app, the owner can unlock his phone by simply pressing his finger to the screen. It has had over 12 million downloads so far. inoXapps has since developed over 100 apps.

Others are forced converts: Kishore A.K. and two of his friends were laid off by an IT firm during the 2008/09 downturn. Instead of hunting for another job they set up Althea Systems, funding it from the severance package they received. Click here to Enlarge
They have since produced a video discovery app called Shufflr, which works on several operating systems. "We want to build a world-class product out of India," says Kishore. App developers need not necessarily hail from big cities. Hemant Kumar and Vinod Kumar, who founded Sinew Software Systems, which now builds apps for Nokia phones, iPhones as well as those using Android, are based in Sonepat, Haryana. Their best known app is Walletx, which enables consumers to store confidential information securely in their phones. "We didn't have the money to set up an office in a metro," says Hemant. "So we work from Sonepat, though it is difficult to get experienced people here."

Funding for app development is also getting easier to find, with more and more angel investors and start-up incubators looking keenly at the sector. There were eight major investments in Indian app firms in 2011, totalling $31 million, says data from Venture Intelligence, which tracks the private equity and venture capital firms. The biggest of these was Sequoia Capital India and IDG Ventures India's $10 million investment in Bangalore-based Sourcebits, one of the largest app companies, which has created a host of gaming and fun apps and includes Intel, GE, SAP, IBM, and MIT Sloan among its clients.

Looking to India
Even entrepreneurs from neighbouring countries are looking to these investors for help. When Manish Modi and Suraj Sapkota from Kathmandu, Nepal, thought of a photo sharing app that would convert still photos into dynamic formats, allowing consumers to add text, music or animation to them, it was to India they came looking for funding. And sure enough, an Indian start-up accelerator invested Rs 5 lakh in the project. "You have to be either in the Silicon Valley or Bangalore to create a global product," says Modi, who has since set up a Bangalore office. We want to build a worldclass product out of India: Kishore A.K. of Althea Systems (left, with co-founder V. Sagar)
Some established companies from overseas are also augmenting their app workforce in India. The Netherlands-based instant messaging company Nimbuzz, for instance, shifted its headquarters to Gurgaon last year. "It was important to have our product team in India. We had to select it as our home ground," says Vikas Saxena, Nimbuzz's global CEO.

The Apps Effect
The excitement is recent. As late as 2006/07, apps were not fashionable. "Six years back we hardly used the term 'app' while describing our work," says Anuj Kumar, CEO of Gurgaon-based app development firm Affle. "Investors did not like that term. But now hordes are attracted to app ventures." Not surprisingly, app firms expect their valuations to keep shooting up. Click here to Enlarge
But the apps effect has also spawned critics who maintain the app story is going the IT services way: Indian companies are increasingly making more apps for clients, rather than creating their own. The bulk of Sourcebits' $12 million odd revenue, for instance - as that of many others - comes from services. The trend has been called 'gamification of the enterprise': every global enterprise wants to build an app, and Indian companies are only too willing to oblige them, as it means a lot of easy money.

"Only a small percentage of players are making money," says Shekhar Kirani, partner at venture capital firm Accel, which has evaluated many app development companies, but has not invested in any yet. "The life of a gaming or entertainment app is about three to six months in the US. So unless you build many apps, you cannot scale."

There is also a shortage of trained personnel. There are not enough good product managers, user experience designers or graphics designers. "For many years we could not find good designers, because of which around 20 games we created were flops," says Alok Kejriwal, co-founder and CEO of gaming company Games2Win. He has now opened an office in San Francisco to get better quality personnel. Splitting the app development process between Silicon Valley and India appears to be the way ahead.