Not all is well with the country's special economic zones. More than a quarter of the country's exports still come from them, but SEZs are grappling with a sharp slowdown in growth.

Villagers agitating against the land acquisition for an SEZ project in Uttar Pradesh. <em>Photo: Shekhar Ghosh/www.indiatodayimages.com</em>
Sebastian P.T.
It came as a big bang policy initiative in 2006, but is quickly losing sheen. Not all is well with the country's special economic zones (SEZs) . More than a quarter of the country's exports still come from them, but SEZs are grappling with a sharp slowdown in growth. The number of new SEZs too has dropped drastically in recent years.

An inept, nebulous policy framework seems to have taken a toll.

The recent move by the Maharashtra government to scrap four SEZ projects only emphasises the point. The abandoned projects - planned over 1,000 to 3,000 hectares - include a multipurpose SEZ by Indiabulls Infrastucture in Raigad district; Mahindra Lifespace Developers' SEZ in Maval taluka of Pune; and two ventures by Videocon Realty & Infrastructure Ltd in Aurangabad and Pune.

The private companies simply failed to acquire the required land for these projects, a grim reminder of the not-so-distant past. In September 2008, the Maharashtra government had scrapped Reliance Industries' grand plans for the Maha Mumbai SEZ in Raigad as 22 villages opposed the land acquisition for the project.

Undoubtedly, land is a thorny issue for SEZs. The difficulty lies in getting land that is contiguous, vacant and not double-cropped.

"It is impossible to get large tracts of land near cities. We gave up the Maval project as we, as a policy, do not go in for projects that the people do not want," says Arun Nanda, Non Executive Chairman of Mahindra Lifespace Developers. 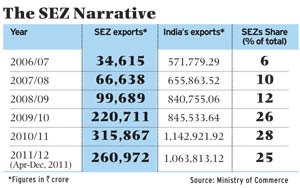 Click here to Enlarge
"We welcome the Maharashtra government's move. What is the need for such huge tracts of land?" says social activist Medha Patkar, who labels SEZs "pervert corporate projects".

Patkar points out that the Maharashtra Industrial Development Corporation (MIDC) had about 80,000 acres of unutilised land - information unearthed through the Right to Information Act. "When there is so much land with the MIDC, what is the need to acquire more land?" says Bharat Patankar of Shramik Mukti Dal, an NGO.

The problem remains that many SEZs are seen as real estate scams.

A recent commerce ministry discussion paper highlighted that there is a perception that many developers do not set up the proposed SEZ and continue to hold on to large parcels of land with the intention of benefiting from its alternative usage and land price escalation.

"SEZ has become a dirty word. Governments do not see any political returns in pushing them and companies thus do not get much political support," says Aradhna Aggarwal, economist at National Council of Applied Economic Research (NCAER).

Lack of clarity on the country's land acquisition policy, then, is a major stumbling block for SEZ projects.

"A comprehensive land acquisition policy should be put in place at the earliest," says Nanda. The UPA government is examining the report of the Parliamentary Standing Committee on Rural Development on the Land Acquisition, Rehabilitation and Resettlement Bill of 2011. The panel opposes the acquisition of land by the government for private entities or even public private projects.

Rural Development Minister Jairam Ramesh though has indicated that the government should play a role. Nanda agrees. He argues that without the state's involvement it is difficult to get land even in the interiors of the country because of fragmented holdings and lack of proper records, among other factors.

FROM THE MAGAZINE: Infrastructure could revive India's growth story

However, until the government can translate its intent into an overarching framework, land acquisition will remain a contentious issue. In this context, doubts arise over the government's ability to push ahead with the proposed National Investment and Manufacturing Zones (NIMZs).

Commerce Minister Anand Sharma had told BT earlier that he remains upbeat about NIMZs becoming a reality. According to the New Manufacturing Policy, each NIMZ is expected to come up in 5,000 hectares or more, and acquiring the land would be the state's responsibility.

It promises to be a tall order.

Already an investment of Rs 2,31,159 crore has been made in SEZ projects since the SEZ Act came into force in February 2006. In the last three years, more than a quarter of the country's exports (see The SEZ Narrative) have come from SEZs. They also provide direct employment to over 8,15,000 persons - as of September 2011 - and about 680,000 jobs have been created since 2006.

Apart from the foreign exchange earnings, SEZs have also created a significant local area impact in terms of indirect employment and , changes in consumption pattern.

However, commerce ministry data shows that SEZs cumulatively have been losing ground over the past couple of years. Export growth of SEZs has slid from over 120 per cent in 2009/10 to just 15 per cent in 2011/12. At the end of 2009/10, of the 364 SEZs that had been notified (approved by the government), only 153 had become operational.

Not only has there been little interest in setting up new ones, there has been a spurt in requests for denotification of approved SEZs. For instance, of the total 46 applications for denotification, 37 have been in the past two years. The imposition of certain levies, and a proposal to take away tax incentives, is believed to be among the key reasons for the cloud over SEZs.

The government had imposed Minimum Alternative Tax (MAT) and Dividend Distribution Tax on SEZs in 2010/11, which were earlier exempted from almost all levies. The Direct Tax Code (DTC) being considered by Parliament proposes to do away with the income tax exemption given to SEZs and instead link tax sops to investments made in them.

"The decision to impose MAT has made SEZS an unattractive proposition. Also, with DTC likely to remove SEZ benefits, there is further scepticism," says NCAER's Aggarwal. 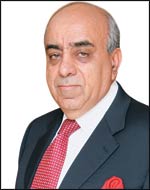 Without the state's involvement it is difficult to get land even in the interiors of the country: Arun Nanda
The government too has conceded that the imposition of these levies has led to a visible slowdown in export growth from SEZs. "Policy clarity is lacking," says Ramadas Kamath, Senior Vice President (Infrastructure), Infosys.

The main aim of the SEZ Act of 2005 is to boost exports, create jobs, bring in new investment and improve net foreign reserves, he points out.

"But the focus is lost in the many 'ifs and buts' in the Act and the rules. Also, the commerce ministry and the finance ministry speak in different languages," he says, citing the example of Instruction No. 70 issued by the Department of Commerce in November 2010 clarifying various policy and operational issues relating to IT SEZs. "It was rejected by the finance ministry. Investors don't know which way to go," says Kamath.

The commerce ministry paper on SEZs points out other flaws. For instance, a major proportion of SEZs is concentrated in six states - Andhra Pradesh, Kerala, Maharashtra, Gujarat, Karnataka and Tamil Nadu - and account for 92 per cent of total exports. Also the SEZs are located around urban centres.

Then, there also seems to be a lack of coordination between the centre and the states - the latter can evolve their SEZ policies within the broad framework laid down by the centre. Many developers complain that they get tax breaks and concessions from the centre but not from the states.

"Uncertainty in tax laws and poor administration of SEZ laws will only drive away foreign investors too," says Kamath.

The Indian government is expected to come out with fresh guidelines soon to revive SEZs and it may be a timely intervention. "The brand SEZ has got hit," says Kamath.

(With data inputs from Jyotindra Dubey)