News
Magazine
Features
The old guard in Silicon Valley is crumbling. It will happen in India too: Malcolm Gladwell

The old guard in Silicon Valley is crumbling. It will happen in India too: Malcolm Gladwell

Malcolm Gladwell, author of such global bestsellers on business as The Tipping Point, Outliers and Blink, was among the speakers at the India Today conclave. He offers his unique perspective on business opportunities, skilling and the Indian advantage in an interview to K. Sai Srinivas.

Malcolm Gladwell
Malcolm Gladwell, author of such global bestsellers on business as The Tipping Point, Outliers and Blink , was among the speakers at the India Today conclave . He offers his unique perspective on business opportunities, skilling and the Indian advantage in an interview to K. Sai Srinivas. Edited excerpts:

Q. To use your own phrase, if you listen with your eyes, what do you find striking about Indian business?
A. The thing that is fascinating to watch is the leapfrogging. You look at Indian success in IT. The idea that you can jump directly into the most sophisticated part of the economy and achieve success so quickly is fascinating to me. In many ways the fact that India was starting from an underdeveloped position was an advantage. You have no allegiance to previous ways of doing things, that is a fascinating phenomenon. 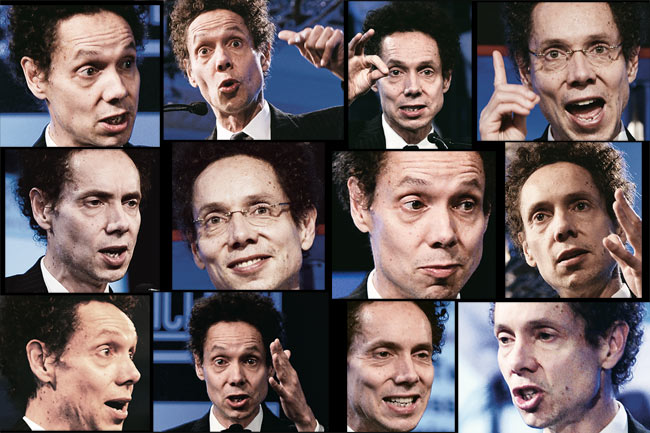 Q. Have we reached the top, or are there more areas to achieve success in?
A. India has less than its expected share of manufacturing; (there are) an infinite number of opportunities. Again, manufacturing is poised to undergo an extraordinary technological transformation with a combination of robotics and 3D printing. These technologies are going to converge in what is clearly going to be a revolution in manufacturing. Maybe the same thing will happen that happened in IT, that is, there will be no order to overturn.

Q. What are your observations about Indian youth compared to young people in China and the US? Do Indians have the luxury to put in the 10,000 hours you mentioned in your book as imperative to specialise in skills?
A. The difference between a country like Singapore or America, and India is obvious. The capitalisation rate is different. So, a much larger share of American youth have access to educational opportunities than in India. But the secondary issue is how effectively are those that do have the opportunity use it. That is where I think many of the developing nations have an advantage over the US. I was talking to a group of 50 students in the University of Pennsylvania recently and I asked those in the group whose parents are born in the US to raise their hands. Five of 50 raised their hands. You realise the extent to which there is an incredible hunger and desire among people from developing countries. It is a wondrous thing to behold.

Q. Most Indian companies find Indian youth is not well equipped for jobs. What are your observations?
A. Education is always going to be the lagging factor. Technology moves at lightning speed. Human beings move much more slowly. We move at social speeds, not at technological speeds. We have to build institutions, we have to change attitudes. Education is going to move the slowest of all. The process of educating someone takes a long time. It is like a big ship that can turn around only very slowly. So it does not surprise me that the skills of any workplace of any population are always, particularly in a fast-moving economy, lagging behind the needs of businesses.

Q. How can it be changed?
A. It can't be changed overnight. I think it is a question of adjusting expectations and saying that there are things we can do to speed it up and there are ways we could be smart about giving people in mid-career an opportunity for retraining… In any economy that is moving ahead technologically, it is going to be impossible to have the educational system in sync with the needs of business because business technology moves faster than new institutions.

Q. There are 122 billionaires in India, according to a recent report. How do you view this huge gap between the wealthy and the aspiring classes?
A. Historically, whenever there are large income inequalities, things have ended badly. The last time we saw this was in Europe and the US in the years immediately before and after the First World War, and it ended badly. It was the cause of extraordinary social unrest and political upheaval. It rewrote the rules of western economies. People have forgotten the years after 1900 when income inequality hit historical heights, heights that are only now being matched. America came very close to a revolution. The level of social unrest in the country was unbelievable. So, this is not just India's problem. Income inequality is reaching levels that are unsustainable.

Q. Are more entrepreneurs set to grow in India?
A. The trick is going to be creating some kind of balance between a society or an economy that is open enough that allows people to start companies and take risks and a country that is flat enough that the fruits of the economy are distributed widely and fairly. You know that balancing act is incredibly difficult to do. And we are seeing countries all around the world right now failing at that. Even countries like China - which is just emerging from a regime which prized equality above all else - are massively unequal. This is the great political question of the modern age, which is: can you lower income inequality without destroying the rewards necessary for entrepreneurs?

Q. How do you feel about businessmen entering politics, as a number have done in India?
A. I don't think that as a business strategy it is particularly useful. There are fundamental differences between the kind of values and skills that are necessary to succeed in the business arena and in the political arena. They are very different animals and they should be different animals. Politics is about inclusion and legitimacy. Democracy is not an end point, it is a process… loud and noisy. Business is not a process. It is an end point. And the best businesses are not messy and inefficient. Every now and then each side makes the mistake of trying to impose its values on the other. Businessmen sometimes jump into politics thinking they can make politics work the same way businesses work. That just does not happen. The trick is to allow these two spheres to coexist separately and happily and not to try and bring them together.

Q. Are we making enough mistakes? Most of your books focus on this aspect too. If you make more mistakes, you tend to grow… Are we making enough mistakes or are we stuck in a quagmire?
A. I think the issue is how many mistakes you are making. Everyone makes mistakes. The issue is what are you doing about your mistakes. Are you learning from them? Are you using them as impetus for change? You know, there are political cultures where bad things happen and people don't talk about them. China is a very good example. Until very recently, for the last 10 to 13 years, corruption in China had been growing exponentially. But there is a real reluctance to talk about it. I don't see the same problem here. No one has ever accused the Indian people of not talking openly about their problems. The talking part is a necessary precursor to any kind of constructive change.

Q. Do you think a company or an organisation can nurture outliers, which is the name of one of your books as well? You said society can contribute a lot towards mentoring people to become successful.
A. A lot depends on the nature of the business. Certain businesses require enormous amount of human capital. Certain businesses do not. Societies make choices about where they want to make those kind of investments. If you look at a country like the US, their educational system takes a lot of burden off private industry in terms of development of human capital. That is the choice the US had made. In other countries the burden falls much more on the private sector. So there are many ways to approach this problem. But I do think the best companies are certainly alert to the potential of their employees.

Q. In that respect, which Indian companies have you studied?
A. It is funny, the first Indian company I got to know well was actually in Silicon Valley. TIBCO, a software company run by an Indian, Vivek Ranadive… It remains a very Indian company. Many senior positions in the company are manned by Indians. It has a very interesting corporate philosophy. Compared to many of his peers in Silicon Valley, Ranadive seems to look far wider and deeper for talent. He is going to take chances on people others won't... I've always wondered to what extent that philosophy is conditioned by the nationality of the firm's founder. About whether someone who comes out of India is aware how much untapped potential there is, and that changes the way he looks for talent.

Q. What about the Tatas and Birlas… they are also going out and investing overseas.
A. Do you think they will be outsmarted by these kind of entrepreneurs in future? There is always a group on the way up and there is a group on the way down. The old guard at Silicon Valley is crumbling as we speak… Dell, Microsoft, Hewlett-Packard. Compaq is already gone. And their place is being taken by someone else. What is fascinating is that the half-life of these companies is so short.

Q. Do you see that happening in India?
A. It will inevitably happen in India. I think the trick is to build a system that is resilient and dynamic enough. When one person falls someone else takes his place.

Q. How do you think the wireless world is going to change India?
A. Modern digital technology gives you a chance to go from nothing to the head of the pack. To jump over the legacy systems that are in place. The paradox of rapid technological change is that it favours the underdog. The faster things move the greater the opportunity for someone who has nothing to jump off, to jump to the top of the line. With this idea of a national ID (Aadhaar) India is doing what no one else in the world is doing. You signed up 300 million people. It is an astonishing feat. The paradox of that is that it is because India was underdeveloped it was able to do things that are extraordinarily sophisticated and cutting-edge.

Q. Do we conform to the Warren Harding principle?
A. (In his books, Gladwell puts this name to the phenomenon of the US public falling in love with handsome leaders who have contributed little to the nation.) Is India enamoured of its leaders: Rahul Gandhi, Narendra Modi?
I think that reflects a fairly universal human desire… it has roots in revolutionary history. So, I can't imagine India will be exempt. I would not name any (leader here). That observation was about all human beings.
Published on: Apr 01, 2013, 12:00 AM IST
Posted by: Navneeta N, Apr 01, 2013, 12:00 AM IST