The digital entertainment company, set up in 2011 by Sharad Devarajan along with fellow Indian-American entrepreneurs Gotham Chopra and Suresh Seetharaman, is telling stories about Indian superheroes with a contemporary twist.

Graphic India CEO Sharad Devarajan (left) with CA Media CEO Rajesh Kamath. PHOTO: NISHIKANT GAMRE
Ajita Shashidhar
Group of robbers armed with high-tech weapons targets passengers on a train in Mumbai. Its plans are foiled by a teenager who jumps out of the sky wearing a body suit that harnesses his yogic superpowers. After handing over the robbers to the police, the boy rushes home worried that he will get a scolding from his elder brother if he is not on time to cook dinner. The humble teenager is Raju Rai, who lives with his brother Sameer and transforms into superhero Chakra-The Invincible whenever Mumbaikars are in trouble.

Some might say there is nothing new about an Indian superhero, what with characters such as Nagraj and Super Commando Dhruva enthralling millions of Indians for many years now. But Chakra is different. Why? Its creators are projecting him as India's first international superhero.

Chakra was co-created by Stan Lee - the man behind iconic characters like Spider-Man and Iron Man - and Sharad Devarajan, who set up digital entertainment company Graphic India along with fellow Indian-American entrepreneurs Gotham Chopra and Suresh Seetharaman. The legendary Lee's association is not the only factor that differentiates Chakra from other Indian superheroes. The story-telling is much more contemporary.

"I expect Chakra to appeal to readers around the world - not just India," says Lee (see Chakra will appeal to readers globally). "I try to create characters that connect with the basic human struggles and challenges which are relatable to people from Mumbai to Manhattan." 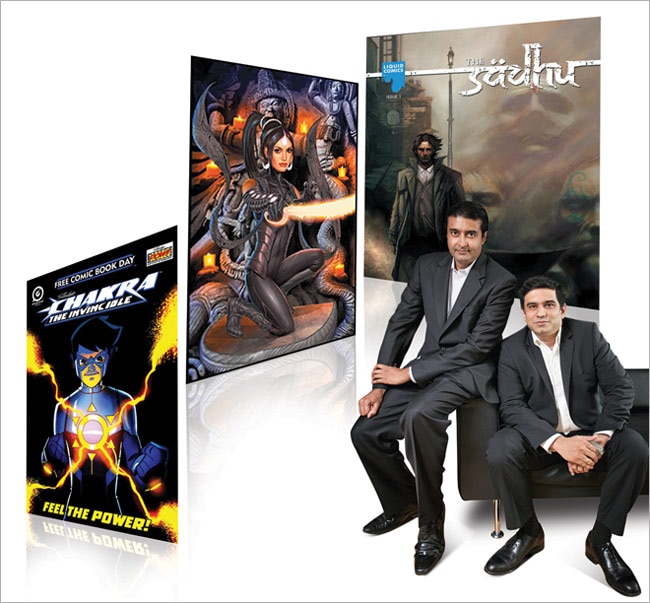 Our characters will have origins in India but they will speak to people from Beijing to Boston: Sharad Devarajan, CEO, Graphic India Photo: Nishikant Gamre
The Chakra comics hit the stands last year, first in the US and then in India. Come November, children's channel Pogo will begin airing an animated series on the superhero. Lee and Devarajan are also in talks with a Hollywood studio to make a film on Chakra.

"We want to package India in a way that has never been done before," says Devarajan, without revealing details of the discussions with the studio.

The comics are currently distributed free of charge, but will later be priced at Rs 400 for an 80-page issue. Will they sell at this price, considering that an Amar Chitra Katha book costs Rs 50? "Most Indian comics are cheaply produced. The illustrations are tacky and the stories are not compelling," says Paul Vinay Kumar, Publisher at Westland Ltd, which publishes the Graphic India comics. "But if you have a good story and present it well, people will not hesitate to pay."

Devarajan and his two partners are not new to comics. In 2006, the trio set up Virgin Comics in association with British billionaire Richard Branson. They bought out Virgin Comics in 2008 and renamed the company Liquid Comics. Graphic India was set up in 2011 as a unit of Liquid Comics. In January, it sold a minority stake to CA Media, the Asian investment arm of private-equity firm The Chernin Group. Rajesh Kamat, CEO of CA Media, says the one thing that appealed to them about this business was the multi-dimensional play. "They are not restricted to one platform. They are there in print, television, online, live action films and will soon expand to merchandise."

Apart from Chakra, Graphic India has two more Indian superhero characters - Devi and Sadhu. Devi, created by acclaimed filmmaker Shekhar Kapur, is about a woman  endowed with divine powers. Sadhu was created by Gotham Chopra, son of self-help guru Deepak Chopra. It is about a British soldier, who acquires supernatural skills while living with ascetics after his family is murdered.

While Chakra appeals to kids from seven to 12-year-olds, Devi and Sadhu are targeted at grown-up audiences, on the lines of the Iron Man and the Avengers. Graphic India, says Devarajan, also wants to take the characters across platforms - publishing, TV, digital and live action films. Like Chakra, the company is in talks with Hollywood studios to convert Devi and Sadhu into live action films. The web series of Devi was recently aired on YouTube. Devarajan has also tied up with Grant Morrison, the writer of Batman and Superman comics, for an animated series on the epic Mahabharata.

India has a rich story-telling heritage and comic characters such as Chacha Chaudhary have been entertaining people for generations. The local comics industry is estimated at $100 million while the animation market is worth $650 million and is growing at 30 per cent annually. But Indian comic characters haven't succeeded in creating a global appeal yet. Many young Indians have grown up reading and watching international content, the likes of Pokeman and Power Rangers. "The dhoti-clad Chacha Chaudhary solving mysteries in a village may appeal to the local audience but is of no significance to a young adult in Boston," says a top executive at a publishing company who does not want to be named.

Another reason Indian characters don't have the scale of a Spider-Man or Mickey Mouse is that a large part of the revenue for these global franchisees comes from animation. The Indian animation industry is still at a nascent stage. Filmmaker Ketan Mehta, who owns Mumbai-based animation company Maya Digital Studios, says after being an animation outsourcing hub for about two decades, India has moved on to content creation only in the past four to five years. "The leap of faith will take some time," he says.

Rajiv Chilaka, Managing Director at Green Gold Animation, agrees with Mehta. "Spider-Man is almost 70 years old and it took 30 to 40 years for it to travel outside the US. I am sure our characters will make the leap faster," he says. Green Gold created the country's most popular animation character, Chhota Bheem, five years ago. The Chhota Bheem franchise is now worth Rs 200 crore.

Chilaka is now looking at making Chhota Bheem a global phenomena by releasing animation films in Southeast Asia, the US and Dubai. "The idea is to look beyond the Indian diaspora by experimenting with an advanced level of screenplay and telling the story with a more global flavour," he says.

Some others are also taking a cue. Actor Mukesh Khanna, who played the popular character Shaktimaan in the late 1990s, has joined hands with Reliance Big Animation to create an animation series on the superhero and plans to release it in various Asian markets. But not everyone is looking overseas. Manas Mohan, Chief Operating Officer of ACK Media, which publishes Amar Chitra Katha comics, feels it is more important to cater to the Indian market. "I don't think Hollywood will significantly add to my business," he says. "I would rather work on my existing characters such as Supandi and Shikari Shambhu and make them larger than life in India by rolling them out across platforms before rolling them out globally."

Devarajan, however, has his goals firmly in sight. He aspires to make Indian characters as larger than life as a Spider-Man or Batman. "We are not only looking at building the next Hanah Barbara of India but also the next Marvel of India," he says. "Our characters would have origins in India but they would speak to people from Beijing to Boston."