Not all Indian bulk drug makers are reeling before the Chinese onslaught. Some have honed their processes to become world leaders in niche areas.

When M Narayana Reddy set up Virchow Laboratories in Hyderabad in 1981 to make Sulfamethoxazole, an antibacterial drug used as a low-cost, broad-spectrum antibiotic, there were 30 others in that city alone making the same product. Today, Virchow Labs, the flagship company of the Rs 2,000 crore Virchow Group which makes numerous drugs, drug intermediates and biopharmaceuticals, is the biggest producer of Sulfamethoxazole in the world, manufacturing around 9,000 tonnes per annum.

"There is no other company making it except one in China. But that one can barely meet 50 per cent of the Chinese domestic requirement. All the rest, across the world, is supplied by us," says Reddy. The starting point for Sulfamethoxazole are substances as common as sugar and sulphur.

How did Virchow thrive while all the others fell by the wayside? Over the years many found the making of Sulfamethoxazole uneconomical and faced declining profit margins. They turned to making other products with higher margins. But Reddy saw every such setback as a challenge and looked for ways to become more efficient, altering his production processes in many small ways so his margins were not affected. 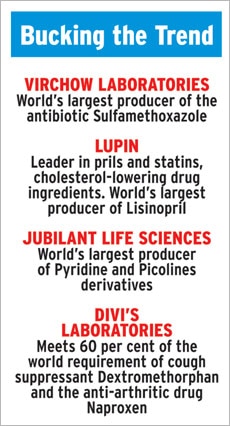 Most air-conditioners, for instance, use compressors. Reddy, instead, installed the more economical vapour absorption chillers in his plant - which run on steam that would otherwise have been wasted. He brought in fuel efficient boilers instead of ordinary ones. He set up a captive power plant which not only generated power for his unit but also produced high pressure steam for use in the manufacturing process.

"Each time a company stopped production I would proportionately increase my capacity, and invest all my profit either in advanced equipment that would get us tax benefits, or in other ways which improved efficiency," says Reddy. What also helped was that Sulfamethoxazole, though an old product, continues to be in use - patients have not developed resistance to it as often happens with antibiotics. It is used in combination with a small quantity of Trimethoprim, which Virchow also produces. The drug is sold as Septran by GlaxoSmithKline Pharmaceuticals and as Bactrim by Roche. Indeed, this range of antibiotics is now even being considered as a second line of treatment for AIDS.

Reddy's success with Sulfamethoxazole is not unique, though it bucks the prevailing trend. Increasingly, faced with stiff competition from China, Indian bulk drug makers - those who produce the so-called Active Pharmaceutical Ingredients (APIs) that go into the making of finished medicines which the trade calls 'formulations' - are shrinking or abandoning their business. Chinese bulk drug makers, with the active support of the state, have built gigantic capacities which allow them economies of scale their Indian counterparts cannot match.

Most Indian formulation makers prefer to import bulk drugs from China because it is cheaper to do so, and in fact, in the last few years, have become heavily dependent on Chinese imports. A report in July this year by the Associated Chambers of Commerce and Industry of India (ASSOCHAM) notes: "This lack of self-sufficiency poses significant risk? Any deterioration in the relationship with China can potentially result in severe shortages in the supply of essential drugs to the country. Additionally, China could easily increase prices of some of the drugs where it enjoys a virtual monopoly."

Process innovation, as Reddy's Virchow has shown, is the way out, but only a handful of bulk drug makers have been able to succeed at it so far. Another is the Rs 11,086-crore Lupin Ltd, the largest producer of Lisinopril in the world, used in the treatment of high blood pressure and sold to around 30 pharma companies, both in India and overseas. It makes Lisinopril in both bulk drug and finished drug form as well as Lisinopril formulations. Last year, Lupin produced 105 tonnes per annum of Lisinopril API, and this year is ramping it up to 120 tonnes.

And it is not just Lisinoprils and statins (drugs used to prevent heart diseases or to check cholesterol) that Lupin leads in. "We have global scale in about a dozen products," says Kamal K. Sharma, Vice Chairman. "This has been achieved through a combination of process innovation, project management - the speed and economy with which a project is executed - and productivity enhancements, controlling the cycle time while at the same time keeping an eye on by product recovery, quality and cost." He maintains that Lupin looks at a healthy mix of "vertical integration and vertical specialisation", where the focus is on processes in which the company has an edge over others.

Another instance is the Hyderabad-based Divi's Laboratories, global leader in the manufacture of two bulk drugs: Dextromethorphan - used in cough suppressants - and Naproxen that goes into anti-arthritis formulations. "We supply 60 per cent of the world's requirement of both," says L. Kishore Babu, Chief Financial Officer. "We have markets in the US and Europe." The company can produce around 1,000 tonnes a year of Dextromethorpran and 3,000 tonnes of Naproxen, the two drugs contributing around 25 per cent to its turnover of Rs 2,500 crore. 'Each time a company stopped making Sulfamethoxazole, I would proportionately increase my capacity', shares M. NARAYANA REDDY, MD, Virchow Laboratories. (Photo: A. Prabhakar Rao)
A fourth success is Jubilant Life Sciences, a leading manufacturer of Pyridine and its numerous derivatives at its plant in Gajraula, Uttar Pradesh, about 120 km from New Delhi. These are used in the production of a range of agrochemicals, pharmaceuticals, dyes, solvents, metal finishes, fine chemicals and more, and sold to 275 customers across the globe. Pyridine is usually made from petrochemicals, but the the Rs 5,803-crore company employs agricultural feedstock instead, which makes the production process environment friendly, its carbon footprint being 46.7 per cent lower than that of manufacturers using the conventional process. With both backward and forward integration, it also produces Pyridine at the lowest cost globally. "Our manufacturing process uses ethanol, a renewable biomass, and hence our Pyridine qualifies as a green product," says Pramod Yadav, CEO (Advance Intermediates and Nutritional Products).

Is process innovation the only way to stand up to China's might? Glenn Saldanha, Chairman and Managing Director, Glenmark Pharmaceuticals, believes so. "Our strength is in process chemistry and that is where India is adding most value globally," he says. "This is what we need to focus on to maintain our competitive advantage." Some others, however, fear it may not last. "While India has traditionally had its strength in process chemistry, in the last couple of years, China has overtaken India in this sphere as well," says Swati Piramal, Vice Chairperson, Piramal Enterprises. "China has invested heavily in resource building and manpower development whereas our country has gone in the reverse direction with no incentive being given to the bulk drugs industry."

Many feel the government needs to act soon to stem the Chinese bulk drugs flood. "The best way is for India to create industry clusters with state support which enjoy common, basic facilities like power at competitive prices," says Satish Reddy, President, Indian Pharmaceutical Alliance (IPA) and Chairman of drug maker Dr Reddy's Laboratories. "This will induce industry to look to investing in capacities that achieve scale and reduce costs."