A few Indian companies are making a killing selling Indian ethnic-wear online. Ethnic designs have always had a market overseas, thanks to tourists and expatriate Indians carrying outfits back with them and generating awareness.

Efello co-founders Pankaj Thapar (left) and Narender Kumar PHOTO: Vivan Mehra
Sunny Sen
The first sound that greets Pankaj Thapar and Narender Kumar when they enter their office in Okhla, New Delhi, is a steady clatter of 50 sewing machines. For them, it is not so much a clatter as a symphony - the sound of tailors getting clothes ready for dispatch is music to their ears. Thapar and Kumar are the co-founders of Efello.com, which sells ethnic-wear online to markets such as the United Kingdom and the United States.

Okhla, with its bumpy and dusty roads, is a very different world from the one they knew 10 years ago. Back then, they were living in London, supplying kurtas and pashminas to local retailers. In 2008, however, those retailers started importing clothing directly from India, and Thapar and Kumar had to watch helplessly as their Rs 20 crore business crumbled.

The duo went back to the drawing board and came up with a grand strategy to go retail online . This time they would not limit themselves to London but would target the South Asian diaspora in the UK, the US and Europe. The venture did not begin well.

"In 2009 we thought we had taken a wrong decision, as we were not even getting a payment gateway," says Thapar. "It took us seven months to get one." A payment gateway is a processing solution for online payments.

But business picked up thereafter and their strategy was vindicated. While most e-commerce companies are yet to break even, Efello.com claims to have made a few lakh rupees in profits in the first year itself. As for the top line, the company's sales are expected to touch Rs 20 crore by the end of this financial year, says Thapar. The ambitious Efello founders now hope to earn Rs 500 crore in revenues over the next four to five years.

Ethnic designs have always had a market overseas, thanks to tourists and expatriate Indians carrying outfits back with them and generating awareness. "Bollywood and Indian serials have also helped in branding, and this is creating a big ethnic market overseas," says Arvind Singhal, Chairman of Technopak, an advisory firm.

Moreover, unlike the Indian ecommerce industry, which is still evolving, online shopping has matured over time in developed markets. With average prices six to seven times higher than in India, margins are high, allowing low-cost companies to make a killing. Delhi's Utsav Fashion and Chennai's Cbazaar, for instance, derive about 95 per cent of their revenues from abroad.

Cbazaar started out in 1999 from a small room in Chennai's Egmore locality. Today, it has a headcount of 240. Founder and CEO Rajesh Nahar declined to reveal revenue numbers but says the company has been "profitable from day one". Nahar explains that companies in this segment are profitable because they have not taken huge funding from venture capitalists to scale up. This reduces the pressure to grow rapidly.

"You don't burn money today to make money later," says Nahar. "We come from a different mindset." Manoj Kumar Sarawgi, a 1990 IIM-Ahmedabad alumnus, launched Utsav from his brother's store in Jaipur. He now calls it a "proof of concept" store. "It helps us understand the market," says Sarawgi. Foreigners buy stuff in the shop, and become repeat customers on the website once they are back home, he explains. Today Utsav has a million unique visitors per month, the most in the market.

The online international ethnic apparel market is worth $2 billion and growing at 25 to 30 per cent, according to industry experts and business owners. More and more companies are flocking to this segment. For instance, Fabindia and Nalli, both well-known brands that have physical retail stores in many Indian cities, have announced plans to go online and target international customers.

The business model is pretty simple. Each company has a design catalogue available online. Customers choose a design and can provide exact measurements if they want it customised. This also makes them more comfortable buying clothes over the Internet. Payment is made upfront, through a standard gateway, and delivery is handled by three or four global logistics players. Generally, it takes anywhere between seven and 15 days to deliver an order.

Online ethnic-wear retailers produce about 35 per cent of their garments in-house. The rest is acquired from vendors across the country. "We may be the largest tailoring outfit in the world," says Pradeep Katyal, CEO of Utsav Fashion, considered the biggest company in this segment. Utsav expects its sales numbers to jump from Rs 60 crore to Rs 200 crore by the end of this financial year. The company has about 50,000 stock-keeping units, essentially the number of designs available for sale. That is far more than a brick and mortar shop would have on offer. Efello has about 10,000 such units and is looking to scale up to 40,000. Cbazaar has 16,000 and is adding 150 new designs every day.

During the Eid season, Efello sold 1,000 pieces, as demand for ethnic-wear increased. It expects a spike in demand during Diwali as well. The average price of ethnicwear sold during this period is Rs 7,000. In India, the average price ranges between Rs 700 to Rs 1,000, says Efello's Kumar. "And there is no cash-on-delivery, which can lead to an additional operational cost of 20 to 30 per cent," he adds. 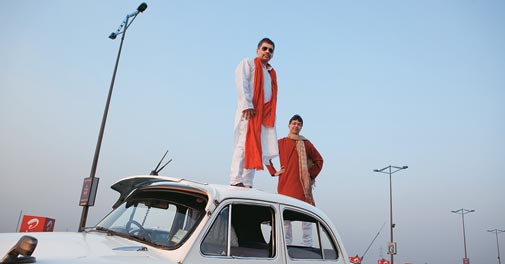 Pradeep Katyal (left), CEO of Utsav Fashion, with founder Manoj Kumar Sarawgi
Industry watchers are impressed by the success of the move to tap the international market. "Ethnic garments at that ticket size have good margins, making the business profitable," says Technopak's Singhal.

One challenge all these firms face is converting customers who like to try out clothes before buying them. Many are uncomfortable buying an expensive clothing item just by looking at a screen. Besides, an ill-fitting garment could cause the customer to turn his back on the company. Quality is another issue. The lookand-feel challenge has been addressed to some extent by allowing customers to provide their measurements and customise the fit.

Just about two per cent of the clothes are returned, unlike in India, where the figure is close to 30 per cent. For the most part, companies simply refund the money to the customer without taking the item back, since the logistics cost involved is very high.

Successful companies could prove a lucrative investment target for venture capital firms. Some of these outfits have grown well without any external funding but could need it to grow further. "This kind of business is good for venture capitalists," says Rachna Nath, an Executive Director at PwC.

"However, it has to be scalable." In May, Cbazaar decided to seek funding to expand its business. Nahar and his team convinced Ojas Ventures and Inventus Capital to invest $3.5 million in the company. Efello is also seeking investments to scale up. Currently, it has more designs for women and is looking to add more men's and kids' wear as well as jewellery.

"Selling ethnic apparel to foreign customers online can be a great business with good margins, but I doubt if it is scalable," says Pradeep Tagare of Intel Capital. However, he adds: "If companies achieve revenues of Rs 50 crore to Rs 100 crore, it shows that they have figured out the market".

The market is expected to expand in coming years and become more competitive. Already, industry experts say, a dozen such companies have mushroomed, though they are still small. The entry of Fabindia and Nalli will heat up the competition. Over the long term, there is even a risk of the business getting commoditised, as happened in India, where apparel e-commerce companies are a dime a dozen.

For now, the future looks bright. "We have a huge opportunity ahead, and we are profitable," says Efello's Thapar. So long as his tailoring orchestra continues to play, he knows things will be good. For as they sew, so shall he reap.