Despite many difficulties, a number of other entrepreneurs are setting up their own ventures to make novel, low-cost medical equipment suited for Indian conditions.

Shyam Vasudeva Rao (standing) and K. Chandrasekhar, founders of Forus Health, with their product 3Nethra, which detects eye problems <em>Photo: Deepak G . Pawar/www.indiatodayimages.com</em>
Taslima Khan
Dotted with fashion showrooms and boutiques, Shahpur Jat is a bustling market in South Delhi. Some of the country's marquee fashion designers have set up shop here. It is an unlikely setting for a medical device start-up, but Consure Medical is tucked away in a corner of this market, inside a nondescript building. A brainchild of Nishith Chasmawala, a plastics engineer from University of Massachussets in the US, Consure has developed a low-cost product for fecal incontinence, a painful medical condition in which patients are unable to control their bowel movements. 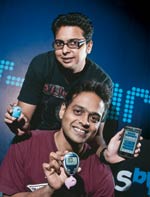 Hemanshu Jain and Shreekant Pawar (Photo: Rachit Goswami)
"We chose fecal incontinence because there is a social stigma attached to the problem and so the potential to create an impact is huge," says Chasmawala, who was earlier associated with Kyphon, a Silicon Valley start-up that developed a patented product for the treatment of vertebrae compression fractures. In 2007, Kyphon was acquired by Medtronic, a global leader in medical technology. The device developed by Consure is being tested at New Delhi's All India Institute of Medical Sciences (AIIMS) and is expected to be ready for commercial sales by the third quarter of 2013.

Chasmawala is not the only entrepreneur to foray into medical devices. A number of other trained professionals, who have worked with global leaders in medical devices - such as Johnson & Johnson , GE Healthcare, Philips and Siemens - are setting up their own ventures with novel, low-cost products suited for Indian conditions. "This is a talented mix of engineers and doctors who have global experience," says Rajesh Rai, CEO of India Innovation Fund, a venture capital fund which has invested in Consure along with Indian Angel Network. About 15 business plans related to medical devices have landed on Rai's desk lately. Bangalore-based start-ups Remidio, which has developed a low-cost ophthalmology device, and Jana Care, which uses mobile phones to manage diabetes, also had compelling business models, says Rai.

India has 61 million diabetes patients, but less than 10 per cent of them are diagnosed. We thus see a bigger market in the US and Europe"

A study by consulting firm Deloitte and industry body FICCI in 2010 pegged the size of India's medical devices market at $4 billion. The medical technology industry in India relies heavily on imported equipment, which is very costly, thus restricting its affordability and widespread use, says the report.

The home-grown medical devices industry in India is still nascent, though the government is trying to support frugal innovation here. For instance, the Ministry of Science and Technology and Stanford University, California, kicked off the Stanford-India Biodesign Programme in 2008. Funded by the ministry, it selects and trains teams to innovate in medical devices, from identifying problem areas, building the product and conducting clinical trials. "So far, 10 simple and affordable devices have been invented and over 20 patents filed," says Balram Bhargava, Executive Director of the programme and Professor of Cardiology at AIIMS. Bhargava earlier worked with Stanford's Paul G. Yock, inventor of the ultrasound machine.

The Mumbai-based Forus Health is another government-supported venture. K. Chandrasekhar and Dr Shyam Vasudeva Rao, colleagues at the Philips Innovation Centre until January 2010, quit their jobs to set up Forus. The start-up has developed 3Nethra, a low-cost and portable ophthalmology device which can detect all eye problems ranging from glaucoma, diabetic retina and cataract.

3Nethra was chosen by the Department of Science and Technology as a top innovation and its functioning demonstrated to US Secretary of State Hillary Clinton on her visit to India two months ago. 3Nethra can make a big impact in a country which has 12 million blind people, the highest in the world, but only 18,000 ophthalmologists.

"What is important is that in 80 per cent of the cases, early detection could have prevented blindness with a few eye drops or with change in lifestyle," says Shyam Vasudeva Rao, Chief Technology Officer of Forus Health, which has installed 3Nethra in over 50 hospitals across the country.

The focus on low-cost, high-quality products built for the Indian market is attracting investors to medical device ventures. Forus received $5 million in funding from venture capital firms - IDG Ventures, and Accel Partners - in April this year.

75% of India's demand for medical devices is met by imports

Mumbai-based Biosense, which has developed a device to detect anaemia without a blood sample, has raised funding from investor group Global Super Angels. The device, TouchHb, when placed around the fingers can help detect anaemia. Still undergoing clinical trials at a few hospitals in Mumbai, TouchHb has drawn investors who see its scalability potential. "It can even be used as a public health tool by government health centres or as a consumer health product just like a thermometer," saysAbhishekSen, Chief Technology Officer, Biosense, who hopes to sell two million devices in India.

These indigenous devices have great potential in advanced markets as well, given the rising health care costs globally, say investor groups. Ranjith Menon, Vice President of IDG Ventures, cites the example of one of his portfolio companies, Perfint Healthcare, which has installed more than 100 of its cancer detection product PIGA CT globally.

Consider the example of yet one more Mumbai-based start-up, Diabeto, which has developed a device for easily monitoring and managing blood sugar levels in diabetics. A bluetooth-powered hardware device, it enables the transfer of glucose readings from the glucometer into Android device. The readings can then be analysed easily with the help of an Android application. However, co-founder Shreekant Pawar sees a bigger market in other countries for the low-cost product, which will be retailed at Rs 2,500 to Rs 3,500. "India has 61 million diabetes patients, second only to China, but less than 10 per cent of them are diagnosed and hence use glucometers. We sense a bigger market in the US and European countries," he says. 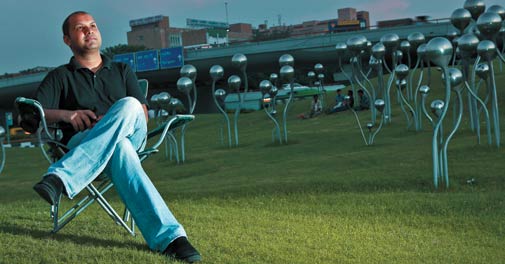 In Silicon Valley, there are over 18 to 20 venture capitalists in the medical devices space. There are none in India with such focus: Nishith Chasmawala Photo: Aditya Kapoor/www.indiatodayimages.com
Teething Problems
Despite the potential, most medical device ventures have to battle considerable odds. "Taking the device from the idea stage to the patient may take seven years or more," says AIIMS's Bhargava. It means big investments in research, product development, clinical trials, in manufacturing and distribution channels.

Clearly, manufacturing for the mass market needs deep pockets. Most entrepreneurs still find it difficult to source funds despite the growing interest of venture funds and angel networks. "While in Silicon Valley, there are over 18 to 20 active venture capitalists in the medical devices space alone, there are none in India with such focus," says Consure's Chasmawala.

While global corporations generally have their own manufacturing facilities, small companies largely rely on contract manufacturers. "Due to constraints in setting up manufacturing capacities, most of them end up selling off the technology to a larger company or licensing it and earning royalty on the sales," says Gautam Khanna, Chairman of FICCI Medical Devices Forum and Executive Director of 3M Healthcare India. "Larger companies may either commercialise them or kill the product, if it is more advanced than their own product line in which they have invested heavily," says Sinha.

The absence of a proper regulatory body for medical devices in India is also an obstacle for indigenous companies which have to seek certifications abroad even for Indian operations. Most go for the Control Europe certification, a licence for selling in European markets. Others go to US Food and Drug Administration for approval. Still, the Drugs Controller General of India has begun working on devising standards to provide certification. And given the inventiveness and tenacity these entrepreneurs have already shown, the remaining hurdles, too, are likely to be overcome.