Brave efforts are afoot this summer but Indian animation still reels under missing talent, zero state support and an overdependence on technology.

E Kumar Sharma
About 20 minutes into the movie Arjun: The Warrior Prince, a courtier running a swayamvar in the Kingdom of Panchal roars: "Have the mothers of earth stopped giving birth to brave men?" That could be as much a call to arms to the dream merchants of Indian animation, as to the able-bodied men vying for the hand of the doeeyed Princess Panchali.

For, only the brave will make animation movies in India given the unproven market. "We believe that Arjun sets a new benchmark both in the sheer quality of animation and, even more importantly, in the quality of storytelling. It is a film that can be enjoyed by the whole family even without them knowing the story of the Mahabharata," says Siddharth Roy Kapur, Managing Director, Disney-UTV Studios, a Mumbai production-to-broadcasting house controlled by The Walt Disney Co.

Kapur is not being gushy. Arjun has flashes of exceptional animation quality, depth of sound and even the occasional richness of narrative. But what is missing is the makings of a sureshot winner when it releases on May 25.

The story of Arjun, said to cost Rs 30 crore, making it one of the most expensive animated productions in the country, shines the spotlight on the conundrum that is Indian animation. The film is the first animated production in India to be co-branded with Disney, the $41-billion US company's first deep dive into a market that has a voracious appetite for feature films - the country releases around three a day - as well as the world's largest population of children (400 million Indians are younger than 15). 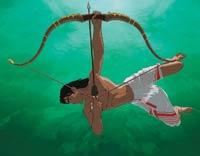 All this should make for a market paved with gold for the iconic diversified media company, right? No. Ask Rajiv Chilakalapudi, Chilaka to friends. The animation entrepreneur from Hyderabad may have spent onetenth Arjun's budget on his maiden film but he is no less anxious than his peers at Disney.

Ahead of Chhota Bheem And The Curse of Damyaan hitting theatres on May 18, Chilaka said what gave him hope is the central character of his production. Chhota Bheem, the main role in the eponymous animation series he created for television, is one of the most successful shows for children in India. Coproduced by his company Green Gold Animation and Turner International India, it has been a regular on Turner's Pogo channel since 2008. 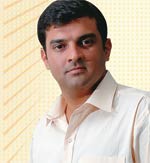 Siddharth Roy Kapur (Left), Managing Director, Disney-UTV Studios Photo: Umesh Goswami
For a leading animation series, Green Gold's revenues are surprisingly anaemic: around Rs 20 crore in 2011/12, though up from Rs 4 crore in 2007/08 (see Slow Progress). The entire Indian animation industry, including work outsourced to India, in fact, is not worth more than Rs 1,130 crore, according to the FICCI-KPMG Indian Media and Entertainment Industry Report 2012. That is not even a speck on the $122-billion global market for animation and gaming; smaller countries like Korea and Malaysia have bigger and deeper animation industries. Disney alone had animation revenues of around $10 billion in 2011.

Click here to Enlarge
That Missing Something
What ails the Indian animation industry and what keeps it from connecting with a target audience of children consuming $100 billion worth of toys, clothes, entertainment, food, and other products and services?

Such religion-based content may seem appropriate because there is a large Hindu audience in India, but the key assumption here, she argues, is that actual consumers, the children, want to see this type of content. "These mythological cartoons are so focused on passing on values or telling a moral tale that they forget that the core of any narrative is about arousing basic human emotions."

That said, almost none among the handful of Indian animation films that tried to get away from mythology have been successful. Neither Jumbo (2008), starring Akshay Kumar, or Toonpur Ka Superhero (2010) with Ajay Devgn, or Roadside Romeo (2008), produced under the Yash Raj banner, made waves at the box office.

Some believe it was because the filmmakers failed to target their audience and market the movies right. The younger ones were unmoved by the likes of Kumar and Devgn, while older ones, who knew of the stars, found the plot too simplistic.

"You have to get the product mix and attribute mix right for your intended audience," says Batra. 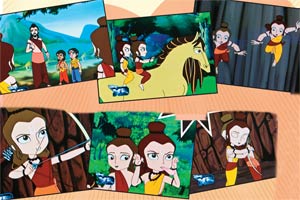 Click here to Enlarge
But others feel the problem is simpler - stories often are just not good enough. "The focus in animated films is more on the technology," says noted film director Subhash Ghai, Chairman of Mukta Arts, a film company. "The form and the colour tend to take over the art of storytelling and therein lies the problem."

Pankaj Khandpur, the creative director and head of production, visual computing labs at Tata Elxsi, which has done the special effects for Arjun and prior to that Roadside Romeo, sees a vicious circle firmly in place instead of a virtuous cycle.

"There is no animation market in India and because a few that were made failed there are no more being made. And television budgets are way too low to support good quality animation," he says. Quality animation movies cost between Rs 20 crore and Rs 40 crore and at least a quarter of that in case of television. 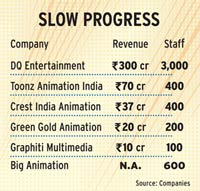 Click here to Enlarge
Animation movie budgets in India are often less than Rs 5 crore ($1 million) - about 0.7 per cent of what a movie like Disney-Pixar's Ratatouille cost (the movie is estimated to have made over $600 million globally). Every minute in an animation film adds 5,400 frames going by the 24 frames per second norm for films. So, a 90-minute film will have 130,000 frames in all - or 130,000 unique images that need to be rendered.

"In the making of Roadside Romeo, we were building the plane and learning to fly at the same time," says Khandpur of the complexity.

The effort may not have set the till ringing, but the movie was nominated in February 2009 by Hollywood's Visual Effects Society for outstanding animation along with the likes of Wall-E (Disney-Pixar), Kung Fu Panda (DreamWorks Animation), and Bolt (Walt Disney Pictures). Wall-E won.

There is another school of thought that believes Indian audiences are not quite ready for animation.

As Disney-UTV's Kapur puts it: "Audiences in India are not conditioned to paying to watch animation on the big screen. This has been quite clearly evidenced in the poor theatrical performance of some of the best Hollywood animation titles and most of the local animation movies.''

The genre, he adds, has traditionally been kid-driven and "even today in India, these movies are called 'cartoon' movies, which only naturally is associated with kids".

Talent Mirage
Perhaps Hollywood's success in animation has to do with the fact that it began making animation films long before the digital era arrived. "Mature markets like the US have a long history of animation," says P. Jayakumar, CEO, Toonz Animation India, a Thiruvananthapurambased animation major. "In India the average talent age is 25 to 30 years old, while the history of animation is also short."

On top of that, India has made little effort to catch up. "Any country with a developed, vibrant digital media industry is built on the foundations of a strong digital arts education system," says Paresh Khara, Managing Partner of Singapore-headquartered Channel Works.

"But in India, there is no government digital media strategy or focus encompassing education and talent development."

Currently, India has just two government-run institutes that teach visual design: the National Institute of Design, Ahmedabad, and the Industrial Design Centre at IIT Bombay. Neither offers a full curriculum in animation. There are some private institutes teaching the subject, but they have neither standard curriculum nor any regulatory body to monitor them. Click here to Enlarge
Despite these constraints, some private companies are bravely carrying on with their own training schools, like Mumbai's Graphiti Multimedia, headed by Ram Mohan, an animation industry veteran of more than five decades. It is, in fact, focusing on building and deploying talent in challenging areas like pre-production and design, not the traditional strengths of India. This is evident in its popular animation show Krish, Trish And Batliboy playing on Turner's Cartoon Network.

Disney-UTV's Kapur believes latent talent for the animation industry to develop exists, and this is evident in the volumes of work outsourced to India. Last year's Puss in Boots was the first production in which DreamWorks relied on a Bangalore animation studio, Technicolor India, to produce a full length feature film. Likewise with the Rhythm & Hues team in Mumbai which worked on Oscarwinning Golden Compass.

Scenes from Chor Police, an animated serial
Click here to Enlarge
Other global production houses like Walt Disney, IMAX and Sony, too, have been outsourcing portions of their animation work to India. Other than the talent, there is near-indifference from the government which has not taken any steps to boost the industry: there are no tax breaks and no subsidies. This is in stark contrast to other countries where governments promote indigenous animation efforts.

Says Khandpur: "In countries that have a strong animation industry like France, Italy and Australia, it is mandatory for broadcasters to have local content which is not the case in India." Which is why, it is much easier for a children's channel in India to license an international programme than to pursue local content.

This comes at a time when the cost dynamics are already making things unfavourable for India. "India is not the only destination today for outsourced animation work in the Asia Pacific region," says Monica Tata, General Manager, Entertainment Networks, South Asia, Turner International India. "There are other countries that offer the same, if not better, quality work and better prices."

Even some shows with Indian content are now being partially put together elsewhere. Tata points to the show Roll No. 21 her company produced. "It is an Indian show, developed and created in India, but the final execution was done by a company called Animasia in Malaysia. 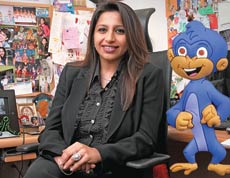 India is not the only destination today for outsourced animation work in the Asia Pacific region: Monica Tata
We will go wherever we get the best and most efficient content at the best possible price," she says. Regardless of where it is made, the drive among international broadcasters to build local content in emerging markets is evident.

Turner, for instance, now owns several properties such as Arjun, Balla Bowl, Team Nirvan, Kumbh Karan, Tripura, Sons of Ram, My Name Is Raj, Johnny Bravo Goes to Bollywood, and Kul Veera, among others. Arnab Chaudhuri, executive director, Creative and Content, Disney Channels, says in addition to the eight local shows already beaming on his company's channels, more are "slated to premiere across the summer period; Luv Kushh, Feluda and Suryaputra being a few examples".

But it is feature films that will, if at all, change the animation landscape of India. So, if Disney-UTV's Arjun hopes to ride on its narrative and visual effects, the small budget Chhota Bheem film intends to cash in on its popular television show.

Says Tata Elxsi's Khandpur: "I am waiting for one animation film to succeed because then you will get a spate of 10 animation films that are made in India." Much like the Pandava brothers, the animated characters of Arjun and Bheem, animators hope, will help break through the chakravyuha, or maze, the industry finds itself in today.