India's teleradiology companies, which decipher scans and X-rays from across the world, are thriving, but they need to spot the next growth curve.

Teleradiology Solutions' Arjun Kalyanpur
It is 3 am in Waterbury, Connecticut, on America's east coast when an emergency case is wheeled into St Mary's Hospital. The patient needs an immediate magnetic resonance imaging, or MRI, scan for the diagnosis to proceed. But she has been brought in at an hour when none of the radiologists attached to the hospital is on call. The resident doctors can take the MRI, but who will study the image and arrive at a diagnosis? Not to worry: St Mary's has a tie-up with Teleradiology Solutions, or TRS, a company located in Whitefield, on the outskirts of Bangalore, India, 13,500 km away. TRS employs a team of radiologists to observe and interpret medical images ranging from X-rays to computed tomography, or CT, and MRI scans sent to it from clients globally.

TRS staff observed and wrote reports on more than half a million such images in 2010. "We have specialists among radiologists, too," says Sunita Maheshwari, who, along with her husband Arjun Kalyanpur, started the company in 2002. There are, for instance, those who specialise in reading neuro or brain images, others who focus on cardiac images and still others who concentrate on thoracic or lungsrelated scans. "And we are quick," adds Maheshwari. "We can report back on a medical image in as little as 30 minutes."

The doctor-couple Kalyanpur (a Yale graduate) and Maheshwari returned to India in the late 1990s. They discovered that Maheshwari, a paediatric cardiologist, could easily get employment, but Kalyanpur, a radiologist, could not. Even as he hung onto his job in the US and went ahead with their relocation to India, they looked for opportunities here. TRS started as a pilot project with Yale and then got its early business - delivered from their spare bedroom - from NightHawk Radiology, a Florida, US-based radiology practice, "There is a 20 per cent shortfall of radiologists in the US," says Kalyanpur, CEO at TRS. "The shortage is most acute at night when radiology departments are seriously understaffed." 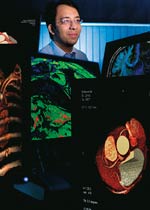 Sumer Sethi, Director, Teleradiology Providers
If the shortage does not pinch the US too much, it is only because teleradiology has become a thriving global business in recent years. Increasingly, TRS faces competition. When it started, there were barely three or four teleradiology companies globally, but soon after, as many others saw a similar opportunity, the number grew to more than 60.

Then came the global economic downturn and with it the shakeout - at least 10 companies folded up. As thousands of Americans rendered jobless lost their health insurance benefits, US hospitals slowed down on both pending payments and fresh referrals. Even radiology companies in the US suffered, with NightHawk, for instance, being taken over by Virtual Radiologic in December last year.

Knowing it could not afford to be complacent, TRS - and its Indian competitors, too - had begun looking beyond the US long before the downturn. In end-2005, TRS won its first deal outside the US, Singapore's National Healthcare Group, responsible for delivering healthcare services to half the island state's population. Says Tyrone Goh, Executive Director of NHG Diagnostics: "Their turnaround time has always been consistent and they have been able to report within one hour of receiving the X-rays. Today, TRS reads about 27 per cent of our X-rays." TRS, which is the largest outsourcer of teleradiology services in India, has 47 radiologists working for 106 hospitals in 20 countries.

Another player is the four-year-old Teleradiology Providers, which seeks its clients among Asian and African countries. "We started with two radiologists and focused initially on the subcontinent, in contrast to other companies, which were started for US clients," says Sumer Sethi, Director at the New Delhi company. The company now has tie-ups with hospitals in six countries.

"There is plenty of growth potential if quality is maintained," says Sethi. As in all other cases of outsourcing, overseas hospitals employ teleradiologists in India primarily to cut costs. "Indian teleradiology companies are cheaper than their US counterparts by about 25 to 30 per cent," says Ashish Dhawad, founder of TeleDiagnosys, a Pune-based teleradiology company, which reads around 300,000 medical images annually.

Still, even in India, radiology calls for expertise and radiologists, unlike business process outsourcing, or BPO, workers, do not come cheap. According to industry estimates, US Board-certified radiologists can cost $400,000, or Rs 1.8 crore, or upwards per year. Apart from the requisite degree, radiologists seeking to cater to US hospitals - even when they do so online - need accreditation from the state in which the hospital is located.

Indian teleradiology companies' ambitions to be world beaters may, however, be fettered by their lack of management expertise and unwillingness to delegate, as the business expands. Most of them are run by radiologists who have little experience of business. At TRS, for instance, Kalyanpur and Maheshwari call all the shots. Despite being approached by multiple investors, they have shown little inclination to divest a part of their stake or bring in professional managers at the top level.

Companies such as TRS risk missing out on growth with such a stance. Venture capitalist K.P. Balaraj points to the instance of Dr Lal PathLabs that is growing its revenues 40 per cent a year after hiring Ranbaxy, Monsanto and Unilever veteran O.P. 'Om' Manchanda as CEO. "Doctors know their businesses well and are strongly networked," the WestBridge Capital MD says. "They need to be willing to cede management control and expand their board to include experts from different fields if they want to hasten growth." 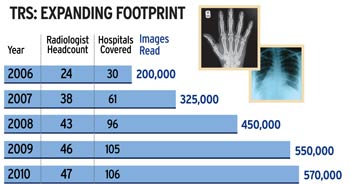 To stay ahead of the pack, says Rickey Bedi, CEO of Telerad Tech, a TRS software unit, it is important to also keep developing workflow tools that will help radiologists work faster and more efficiently. Telerad, for instance, has created software that automatically routes scans and medical images to its radiologists based on their speciality. This helps manage the workflow better and in turn increases productivity.

Finally, there is domestic demand, too, for teleradiologists. According to industry estimates, with a population of 1.2 billion, India only has around 15,000 diagnostic centres, and the number of radiologists working with them is even lower, around 10,000. In comparison, the US, which claims to be short of radiologists, still has 25,000 of them for a population of 350 million. "The value for us would lie in utilising technology to make the most of the trained manpower we have," says Kalyanpur.