A close look at IndiGo - India's only profitable airline at present

When every other airline is struggling, how does IndiGo thrive? Photo editor Vivan Mehra takes a close look at the operations of India's only profitable airline. A check-in staffer doubles as a baggage handler at the airport in Delhi, the airline's base. With 2,800 passengers and 16 fl ights before 8 am, IndiGo's 'on time, hassle free' motto is tested every morning. 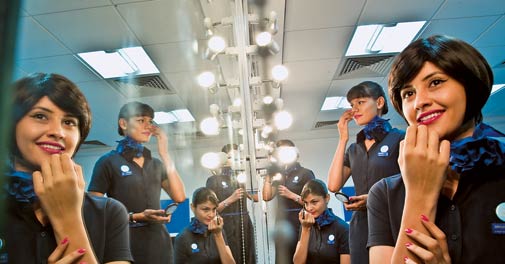 Stewardesses touch up before a fl ight. The navy-blue uniform of IndiGo's all-female 1,230 cabin crew has been designed by Rajesh Pratap Singh. Stylist Ambika Pillai's make-up templates emphasise friendly effi ciency. Only two shades of lipstick and nail colour are permitted: fuchsia pink or terracota. The bob-cut wigs are optional. A passenger lets it fly at Manish Jain, an IndiGo security manager, threatening to get him sacked. Frayed nerves are inevitable, given the crowds. Jain says this sort of fracas is a daily occurrence. Four handlers stack bags in the hold to save space and time. IndiGo's target: the fi rst bag off a fl ight hits the carousel by the time the fi rst passenger reaches it. A last-minute huddle has cabin crew being briefed by pilots before a Delhi-Lucknow flight. IndiGo has 96 employees per aircraft. That's lean-and-mean, compared to Air India's 250 a plane. Smartly packaged food, beverage and merchandise sales make for a healthy addition to IndiGo's net profi t of Rs 650 crore in 2011/12. A stewardess adds up the money earned on a packed flight. 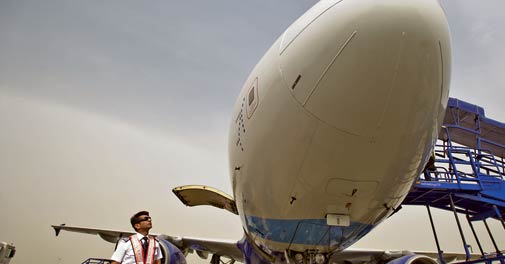 On this mandatory walk-around before a flight, pilot Amar Bhatia spotted blades of grass on the engine rim. "We obsess over details," says IndiGo President Aditya Ghosh. IndiGo, which inducts a plane every month, runs a fleet with an average age of two years and one month (Singapore Airlines's average is over six years) 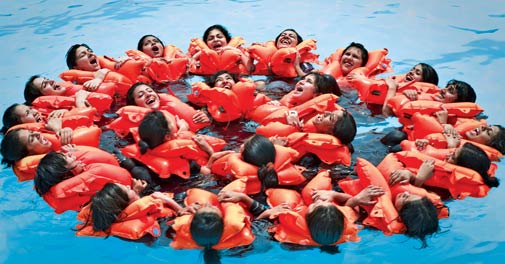 On this mandatory walk-around before a fl ight, pilot Amar Bhatia spotted blades of grass on the engine rim. "We obsess over details," says IndiGo President Aditya Ghosh. IndiGo, which inducts a plane every month, runs a fl eet with an average age of two years and one month (Singapore Airlines's average is over six years). A trainer at the 'i Fly' centre helps coif a recruit as trainees watch. Stewardesses have to behave in identical fashion while on duty: the smiles, the postures, the greetings should all be the same. Pilots and cabin crew live up to the '6E' (read again: sexy) airline code at lunch on a day off. Pilots and stewardessses fl y 30 hours a week, abiding by domestic aviation rules. IndiGo's operations control room in Gurgaon. The movement and status of each aircraft is monitored in real time using radio or satellite data links. The airline claims this helps it avoid human intervention and potential errors. An IndiGo plane docks at base after a Delhi-Coimbatore-Chennai-Delhi fl ight. The airline's deliberate choice of underserved destinations helps add to its profi ts. Other such routes: Hyderabad-Chennai-Thiruvananthapuram-Kochi-Delhi or Srinagar-Delhi-Indore-Nagpur-Bangalore. 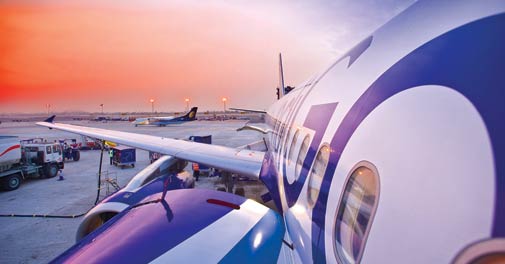 An evening flight being refuelled at Chennai before take-off. The aerodynamic wingtips at the end of the wings help save fuel, adding to another three per cent fuel saved by IAE-made SelectOne engines. Ground crew take about 20 minutes to ready an aircraft for the next fl ight, ensuring IndiGo planes fl y about 12 hours every day.