A decade ago, when Romesh Sobti joined the Hindujas-owned IndusInd Bank from ABN AMRO, the mid-sized private sector bank, with assets of Rs 25,000 crore, was languishing. Return on assets (ROA) was a rock-bottom 0.34 per cent. Net interest margins (NIMs), the interest earned over interest paid, were 1.52 per cent. Return on equity (RoE), tracked closely by investors, was 6.76 per cent.

Today, as Sobti gets ready to hand over the baton to Sumant Kapthalia after turning 70, the bank is at the top of the heap. In the past decade, assets have grown 13 times to Rs 3.07 lakh crore, RoA has pole-vaulted to 1.82 per cent, NIMs have widened to 4.15 per cent, one of the best in the industry, and RoE has jumped to 15.62 per cent, which gives the bank a price to book value of 2.44 times. Axis Bank's price to book value is 2.53 while ICICI Bank is at 3.19. In the BT-KPMG Best Bank Survey 2019, the bank has scored the highest on growth in deposits and advances, non-performing assets (NPAs), RoA, NIMs, return on capital employed and capital adequacy ratio. This pushed it to the top in the mid-sized category.

The credit clearly goes to the re-structuring done by Sobti in terms of profitability, productivity and efficiency. De-risking of the portfolio, sharp increase in current account savings account (CASA) deposits to bring down cost of funds, and productivity gains, all did wonders for the bank.

Now, as the bank gets ready for a new leader, it will have to face a host of challenges apart from the stability of the top management. These include further broad-basing of retail assets to reduce the share of vehicle loans, synergies from recent acquisition of a microfinance company, digitisation, expansion into insurance and asset management and balance sheet strengthening.

IndusInd Bank saw a major succession a decade ago when Sobti brought his team from ABN AMRO which succeeded in turning around the bank. The current succession process started five-six years ago when it was not certain if Sobti would get extension beyond 65. The bank had kept the candidates ready but Sobti got another five years till March 2020.

The grooming process that has been under way for the last five years has involved exposing the possible successors to other verticals, platforms, risk management, operations, treasury operations and asset liability management. Sumant Kathpalia, the 55-year-old head of consumer banking is, like Sobti, a chartered accountant and a foreign banker. "The board looks at things such as performance, consistent delivery, behaviour, ability to carry people along," says Sobti.

"Any management transition in a bank brings disruption. However, the appointment of an internal candidate with vintage may limit the disruption, if any," says a spokesperson for Emkay Securities. A recent study said about 80 per cent successors to the top post in the biggest 500 US companies came from within the organisations.

Nitin Aggarwal, who researches on the banking sector for Motilal Oswal, says the upcoming management succession is going to be critical. "More so, as the new CEO takes charge amid certain asset quality issues over the past few quarters," says Aggarwal. Apart from this, given the impending disruption from fintech and large-scale digitisation, the new leader will have his plate full. Another challenge will be to keep the senior management team intact as often people leave after losing out in the succession race. "A CEO is never a fully baked item that comes out of an oven and sits on the seat. Half the baking is done on the job," says Sobti.

When Sobti joined, the private bank had the legacy portfolio of a non-banking entity, heavily skewed towards commercial vehicle financing, and low CASA deposits. Sobti took over from here and built a much more diversified book with commercial vehicle at 28 per cent, corporate at 46 per cent, microfinance at 10 per cent and non-vehicle retail loans at 16 per cent.

The CASA ratio jumped from 15 per cent to 42 per cent. But the big work in progress is still the non-vehicle retail book. "The new leader will have to focus on the banks plans to grow its non-vehicle retail asset business and increase its rural coverage," says Ajit Mishra, Vice President (Research) at Religare Broking. "The bank has greater focus on the self-employed segment. It is also not present in home loans. The focus is more on high-yield auto lending, apart from MFI and business banking," says Aggarwal of Motilal Oswal.

The bank has also been focusing on loan against property where risks are rising. Its other two products, personal loans and credit cards, are unsecured and again risky. The high growth in unsecured loans and rising share of personal loans/credit cards in books of private sector banks have become areas of concern. The risk has also been flagged by the Reserve Bank of India. Maintaining balance between growth and asset quality will be the biggest challenge for the next CEO. "We are also looking at our fixed deposit base. We want to shrink our dependence on bulk deposits from 30 per cent to 15 per cent in the next three years," says Sobti.

In the last 12 years, the bank's business model has revolved around metro and urban segments. "One of our unfulfilled agenda was to extend the business to rural India. The acquisition of Bharat Financial Inclusion, a microfinance entity, is a strategic fit for the bank, as the next phase of growth is expected to come from semi-urban and rural areas," says Sobti. The existing branch model of sourcing deposits is not sustainable. At present, Bharat Financial has 2,200 branches, 20,000 employees and presence in 1,15,000 villages. Sobti had earlier said that the merger of IndusInd and Bharat Financial is not 2+2 equal four but 4.5.

"There is a synergy element and we want that synergy as early as possible," says Sobti. The bank is creating a full scale platform for micro-lending, savings and payment products. "We want to move from being a mono-line micro lender to financing multiple things such as consumer durables, auto loans, etc," says Sobti. The bank is also creating a cash management ecosystem around villages. "We have one million kirana customers as clients. We have already converted 12,000 kirana stores into outlets for giving cash and payment of utility bills," says Sobti. 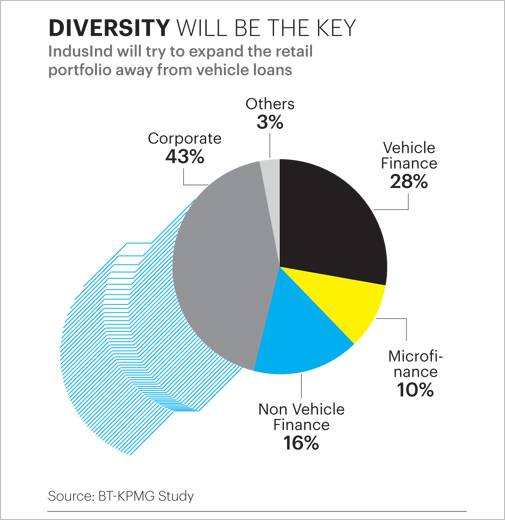 The digitisation drive has brought productivity gains. Its cost to income ratio is 44.19 per cent, one of the best in the industry. HDFC Bank has one of the lowest cost to income ratios of 39.65. ICICI Bank, Axis and Kotak Bank were at 43.56 per cent, 45.45 per cent and 47.37 per cent, respectively, in FY19. "Our agenda is to create a digital DNA which is not just process change or automation. Every part of the bank must think digitally. We want to embed digitisation deep into our psyche," says Sobti. For instance, the bank has launched an innovative 'Next' credit card with three LED buttons. When you buy a product, it gives three options - EMIs, redeeming of reward points and normal credit. It works on PoS terminals. The bank is also partnering with fintechs. "We are working on hybridisation of their (fintechs') credit tools and ours without losing agility and speed," says Sobti.

So far, IndusInd has remained a full-scale banking outfit, unlike ICICI, Kotak or SBI, which are more a supermarket of financial services offering different products such as insurance, mutual funds, etc. IndusInd has declared its intention to change this and launch insurance and asset management products. The bank is waiting for new RBI guidelines to enter these businesses. "We are efficient distributors of these products. I hope the regulatory framework will accommodate our ambition," says Sobti.

The other challenge is bringing down non-performing assets or NPAs. Gross NPAs grew to 2.18 per cent in December 2019 from 0.93 per cent in FY17, 1.17 per cent in FY18 and 2.10 per cent in FY19. In the KPMG study, the bank also lags in liquidity coverage ratio and provisioning coverage ratio (PCR). The NPA coverage ratio is a low 43.04 per cent. HDFC Bank and ICICI Bank enjoy a PCR of 70 per cent-plus. Axis Bank , Kotak Bank and SBI are in the 60s. Sobti is hopeful of crossing the 60 per cent PCR by the current quarter. On liquidity ratio, Sobti says the bank has averaged 110 and even higher. "Our sense is that if you go beyond that you will be wasting liquidity," he says.