Why Indian infrastructure companies are losing on valuations

Policy uncertainties, project delays and high cost of funds have taken a severe toll on the valuations of Indian infrastructure companies.

E Kumar Sharma
P Kodanda Rambabu, 55, has burnt his fingers in the stock market. It is the Hyderabad-based retail investor's infrastructure stocks, including bluechips such as GMR Infrastructure and GVK Power and Infrastructure Limited (GVKPIL), that have let him down.

Rambabu cites the example of Lanco Infratech - he bought 1,000 shares at Rs 56.50 apiece in November 2010 and exited at a low of Rs 9.5 in December 2011. "I was bullish on infrastructure stocks because of the India growth story but am now looking to cut my losses and invest in consumer goods and pharma stocks, instead," he says.

Click here to Enlarge
Rambabu is not a novice investor. A chief financial officer in a small construction company, he has been studying the stock market for over three decades.

Indeed, most investors have been surprised by the speed and extent of the fall in infrastructure stocks over the last two years.

Most investors have been surprised by the extent of the fall in infrastructure stocks.

It is the consequence of a multiple whammy of sorts for the sector. The adversities include fuel supply shortages, an uncertain regulatory environment, high interest rates and delays in clearances of projects. "Execution slowdown is leading to revenue slowdown. Higher debt, rising cost of funds and lower profitability has meant a slowdown in the investment capital expenditure," says Nitin Arora, research analyst at Angel Broking. (See also www.businesstoday.in/infra-economy.)

Robust growth in the power sector is crucial for a developing economy like India. However, the industry is grappling with an acute shortage of fuel supply making fund raising for projects difficult. "Today private equity investors are seeking more clarity with respect to issues of taxation such as general anti-avoidance rules, timebound clearances, fuel supply and regulatory issues," says Issac A. George, director and CFO, GVKPIL.

Consider GVKPIL itself. Uncertainty over the supply of natural gas by Reliance Industries Ltd (RIL) hampered capacity expansion at its two gas-based power projects in East Godavari district of Andhra Pradesh - Jegurupadu III and Gautami Power II. After placing orders with the engineering, procurement and construction (EPC) contractors and investing Rs 200 crore in 2010, the company realised that RIL's gas supply for even its existing plants had dropped drastically - as a result of which they were running at 50 per cent capacity. The company, therefore, shelved its expansion plans last year which required an investment of over Rs 6,500 crore.

There is need to improve the investment climate by speeding up land acquisition and environmental clearances.

Road projects have run into cul-de-sacs following huge delays in acquiring land and getting environmental clearances. About 80 per cent of the land for road projects has to be made available before construction begins, but that rarely happens. There are delays of six months to a year, especially when compensation to private parties is involved, point out experts. Environmental clearances can take another year. "The National Highways Authority of India has set a target for the award of projects involving 8,800 km this year (2012/13) but not much has happened so far," says Arora.

There are other concerns. Developers say that in the eventuality of a scope change - modifications in a project while it is being implemented - which government entities such as the National Highways Authority of India sometimes ask for, there is no timebound, structured methodology for approval of the new design or the increased costs.

"As far as bidding for the road projects is concerned, one may find muted activity and less competition today when compared to the situation that existed till the fourth quarter of last year," says Arora, adding that part of the reason could be the inability of the companies to commit more equity to projects.

Developers point out that road project delays are affecting most of the leading infrastructure companies including GVKPIL and GMR Infrastructure - one of the reasons why the share price of these companies has tumbled the last two years. 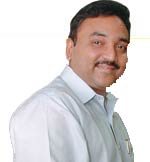 Interest rates are currently over 14 per cent making it diffi cult to access debt. To remain competitive, interest rates should fall below 10 per cent: L. Madhusudhan Rao
Airport projects too have been stuck because of regulatory uncertainties, government inertia and land acquisition woes. Prime Minister Manmohan Singh has promised public private partnerships for the overhaul of 10 existing airports and plans to award contracts for several greenfield projects but the government's record does not inspire confidence.

While the policy for new airports was announced in 2008, plans for many airports were drawn much earlier. Yet work is still to begin on the planned greenfield (new) projects in Navi Mumbai and Kannur in Kerala. The Navi Mumbai airport is well behind schedule due to delays in acquiring land and environmental clearances. Several listed infrastructure companies, including GVKPIL, GMR Infrastructure and Larsen and Toubro, could bid for the airport projects.

Roadblocks Ahead
The inherent nature of the infrastructure business is crucially linked to the policy framework. Infrastructure companies are largely dependent on the government for timely execution, and long delays have a bearing on project viability given the high cost of debt. "Interest rates are currently over 14 per cent making it difficult to access debt. To remain competitive, interest rates should fall below 10 per cent," says L. Madhusudhan Rao, Executive Chairman, Lanco Infratech.

The uncertain business environment - resulting in a sharp fall in share prices - has made it difficult for companies to raise equity. "Two years ago, we could get investors into one of our business verticals at around Rs 36 per share but today the holding company itself, which includes several business verticals, is valued at around Rs 16 per share," says a developer on the condition of anonymity.

There is a need to improve the investment climate by speeding up land acquisitions, evolving a streamlined process for environmental clearances and ensuring fuel supply to power plants, according to analysts. "Once there is greater push to infrastructure with policy clarity and faster clearances, investors will start coming in and valuations will pick up," says A.A.V. Ranga Raju, Managing Director, NCC.

The Planning Commission has set an investment target of $1 trillion for infrastructure during the 12th Plan (2012-17) but it is unlikely to be met unless the government addresses the concerns of the sector "To lift valuations and make fund raising easy for infrastructure companies it is important that steps be taken by the government to ensure speedy implementation on some of the issues hurting the sector," says Lanco's Rao.