The Ultra Mega Power Projects, the New Exploration Licensing Policy, the National Highways Development Project and the SEZ policy were all expected to change the face of the nation.

Anilesh S Mahajan / Manu Kaushik
Zile Singh regrets the day six years ago when he agreed to sell all the land he owned, some 2.5 acres in Haryana's Gurgaon district, to Reliance Industries Ltd (RIL). Singh, a 65-year-old retired Indian Army havildar, had hoped the sale - for a special economic zone (SEZ) the company planned to set up - would improve the lot of his nine-member family. "We were told the SEZ would provide jobs for my two sons," he says. That never happened, and his family struggles to survive on the Rs 20,000 it gets from his pension and one son's temporary job.

Singh wasn't alone in selling his land. About 2,000 other farmers in Gurgaon and thousands more in Jhajjar district, where RIL planned to set up two SEZs spread over 12,500 acres each, also sold their land. They are all repenting now. Why? The company has scrapped plans for the two SEZs citing difficulties in acquiring land - it managed to get less than 10,000 acres. In June, the central government allowed the company to withdraw from the projects. "We sold our land for Rs 22 lakh per acre. The rate has shot up since then to about Rs 1.5 crore per acre," says Singh. "There's no clarity on when we will get our land back." 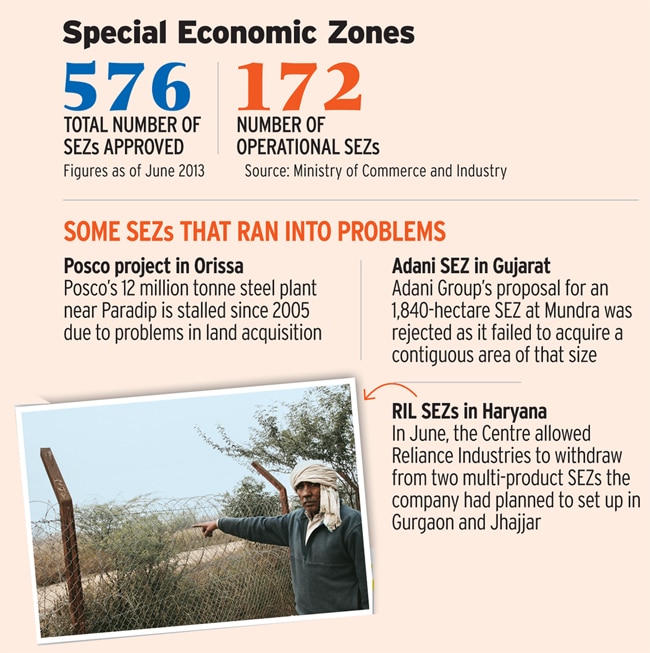 RIL joins a clutch of companies shelving their SEZ projects, as problems in land acquisition, a partial rollback of tax incentives and an economic slowdown take the sheen off these mainly-for-export zones. The SEZ policy is one of several mega development concepts that various governments over the past decade and a half launched with much fanfare. The Ultra Mega Power Projects (UMPP), the New Exploration Licensing Policy (NELP ), and the National Highways Development Project (NHDP) were all expected to transform the economy by improving generation capacity, oil and gas production, and road connectivity. All these did see some initial success, but are going nowhere now.

No More Special
The government introduced the SEZ Act in 2005 to attract investment, boost exports and match the manufacturing prowess of China. Initially, SEZs did attract scores of companies including top business houses such as RIL, Tata group, Essar, DLF and Infosys. This is no longer the case.

Commerce ministry data show that of the 576 SEZs which have received formal approval so far, only 172 are operational. There is no data on how many companies have withdrawn their SEZ projects. "The mad rush of companies coupled with a policy flipflop has led to the complete failure of SEZs," says Nirav Kothary, head of industrial services at real estate consultancy Jones Lang LaSalle India.

The SEZ Act provided tax incentives to developers and units operating in these zones. These sops included no tax on export income for the first five years. In addition, companies get exemptions on sales tax, service tax and import duties. SEZ developers got a jolt in 2011 when the finance ministry levied a minimum alternate tax of 20 per cent on these units and a dividend distribution tax. The withdrawal of tax exemptions has made these projects unattractive, says Pradeep Jain, Chairman of Parsvnath Developers, which scrapped a 100-acre SEZ in Gurgaon in June. Jain says these projects also face problems in getting bank loans. "Banks consider lending to SEZs as commercial real estate lending," he adds.

"Despite the issues faced by SEZs, they are still the best bet for people who want to set up export units," a senior ministry official says. "The ministry is trying to address the problems."

Off the Grid
Around the time the commerce ministry was preparing the SEZ policy, the power ministry was giving finishing touches to the UMPP initiative. The aim was to set up coal-fired projects with a capacity of 4,000 megawatt each. To avoid delays developers face in getting approvals, the policy envisaged that state-run Power Finance Corporation would do the legwork and then transfer the project to selected bidders. Overall, 16 projects were identified. Only four have been awarded so far. Only one - Tata Power's Mundra project in Gujarat - has started commercial generation.

Even this plant is running far below capacity because Tata Power wants compensation for higher fuel costs. Anil Ambani's Reliance Power won three UMPPs. The company expects to commission the Sasan plant in Madhya Pradesh soon. But it hasn't made much headway with the other two projects in Andhra Pradesh and Jharkhand for reasons ranging from expensive imported coal to lack of forest clearances.

The power ministry is now changing the bidding rules for the forthcoming UMPPs. The ministry is looking at issues related to imported coal - passing on any rise in fuel prices to consumers - and the tenure of the contracts. The policy could also look at allowing developers to seek tariff relief for currency volatility given that the rupee has lost half its value against the US dollar in the past six years. "The new bidding policy should take care of this," says former power secretary Anil Razdan. He also feels the UMPP contracts should be for 10 years instead of 25 years currently to minimise legal hassles.

Slipping Away
Power is the not only energy sector in darkness. The oil and gas sector hasn't done any better. The NELP was launched in 1998 to reduce imports of oil and gas by raising local output. India imports nearly 80 per cent of its crude oil, and the NELP aimed to attract foreign players and privatesector companies in the exploration sector by providing them incentives. But policy uncertainty and delays in approvals have put off investors. Finance ministry data show investment in NELP blocks fell to $1.8 billion in 2011/12 from $6 billion in 2007/08.

The government has allocated 251 blocks in nine auction rounds so far. Of these, 110 blocks have reported discoveries. But, only six are producing, petroleum ministry data show. Many blocks have yet to get approvals from various ministries.

"The left hand of the government does not know what the right hand is doing," says a former petroleum minister requesting anonymity. Vandana Hari, Asia editorial director at global energy information provider Platts, says India needs to fix the NELP. "The blocks should be cleared by all wings before allocation."

One of the most promising areas for hydrocarbon exploration in the country is the Krishna Godavari (KG) basin, off the east coast. RIL, Oil and Natural Gas Corp, and Gujarat State Petroleum Corporation are among the companies which have struck oil and gas there. Gas reserves in the basin were initially estimated to be as much as 35 trillion cubic feet (tcf), which can meet global demand for 11 years. The Directorate General of Hydrocarbons, the upstream regulator, now estimates the potential to be about six tcf.

In the KG basin, only RIL and its partners BP Plc and Canada's Niko Resources have started production from their D6 block. Even this block has been in the news for all the wrong reasons. The block's potential gas reserves have been lowered to 3.2 tcf from the initial estimate of 11.3 tcf, according to a regulatory filing by Niko in Canada. Production was targeted to touch a peak of 80 million metric standard cubic meters of gas per day. Output never reached that level and has been falling for three years. RIL has been accused also of exaggerating its capital expenditure. The oil ministry has rejected the additional costs, and the two sides are seeking arbitration to resolve the dispute.

An RIL executive, who does not wish to be named, says the NELP originally gave the operators marketing rights and freedom to price the gas, but the government later changed the rules. "This flip-flop has resulted in putting Indian oil and gas exploration on the backfoot," says Ashu Sagar, Director General of the Association of Oil and Gas operators, an industry group. "No foreign player bid in the last round of the NELP because of the poor regime." Sagar suggests the government scrap the NELP, wherein it allots blocks, and allow companies to themselves carve out areas they want to explore. This would give companies more flexibility in choosing the assets, he says.

Full of Potholes
In 2000, the then prime minister Atal Bihari Vajpayee launched the NHDP to improve the country's woeful transport infrastructure. Initially, projects were awarded to private players on engineering, procurement and construction contracts. By 2005, almost all projects were awarded through the build, operate and transfer system in which developers invest in projects and earn returns in the form of annuity or toll collection. From 2009, developers started offering a premium to the government in the form of an annual payment. In 2010/11, almost 40 per cent projects were awarded on a premium basis as against 25 per cent in 2008/09.

Hemant Kanoria, Chairman and Managing Director of SREI Infrastructure Finance, says companies are now facing problems in executing those projects because they went overboard in the past three years. According to the National Highways Authority of India (NHAI), 38 projects awarded in recent years with a combined length of 4,600 kilometers have not been able to begin work due to the inability of developers to arrange funding, delays in land acquisition and environment clearances. Some other projects, such as the Gurgaon-Jaipur, Nellore-Chilkaluripet, and Panipat-Jalandhar highways, are stalled midway. Some have already bailed out.

GMR Infrastructure and GVK Power and Infrastructure have terminated their contracts with NHAI. Larsen & Toubro, IVRCL Infrastructure, Gayatri Projects and Gammon Infrastructure are reportedly keen on selling some assets. G. Suresh, General Manager (Finance) at NHAI, says 50 completed projects totaling 5,000 km are up for sale as developers are no longer interested in operating them. Revati Kasture, head of research at Care Ratings, says developers stayed away from the bidding process in 2012/13 because banks are wary of lending to road projects. Suresh says NHAI has, through the finance ministry, asked banks to relax rules for developers with strong background. But he says NHAI cannot be blamed for delays in land acquisition as land comes under the jurisdiction of states.

Project delays, costs overruns and slower-than-estimated traffic growth have begun to affect investment returns. According to ratings firm CRISIL, developers earned an average equity return of 22 per cent on projects awarded before 2009. The returns on newer projects are likely to be about 14 per cent. "Revenue projections of developers have gone haywire," says Suresh.

What should the government do in such a scenario? Amitabh Mundhra, Director at Simplex Infrastructures, suggests the government should review the public-private partnership model in the road sector. A policy review is required not just for the road sector, but also for SEZs, power, and oil and gas exploration.

The government must expedite clearances, cut red tape, and resolve problems related to land acquisition. "The government is taking some decisions to attract foreign investment and put the economy on the right track," says Naina Lal Kidwai, President of the lobby group Federation of Indian Chambers of Commerce and Industry. "But what needs to be seen is how it implements those decisions."