Instead of being a beguiling tale about the rise of Emami, the book imparts basic, run-of-the-mill management lessons. By Sandip Ghose 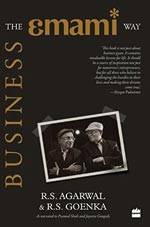 As a child one heard of an allegorical tale of a village barber. He used to carry out minor surgeries for the villagers. Then came along a crafty quack who said to the barber: "You are so naturally gifted; now if only you had a formal training you could become a top surgeon." The simple barber swallowed the bait and asked the quack to teach him. And that was the end of his practice. Each time he picked up the implements he got scared at the thought of what could go wrong. He could no longer trust his intuition and native skills; the burden of medical theory paralysed his craft. Reading Business The Emami Way reminds me of that fictional barber - for reasons I shall come to in a bit.

R.S. Agarwal and R.S. Goenka are the stuff legends are made of. They are phenomenal entrepreneurs who started small by moonlighting while still working for one of the largest industrial groups. From there, they went on to build an empire taking on formidable FMCG multinational giants. They did with FMCG personal care products what Karsanbhai Patel of Nirma achieved with detergents; then gradually expanded into other FMCG categories like edible oils and retail pharmacy chains. To deploy the surplus of the low capital intensity consumer products business, Emami made lateral forays through joint ventures into healthcare and real estate. Nirma had, on the other hand, ploughed back its cash for upstream industries like Soda Ash and Linear Alkyl Benzene. It may not be sheer coincidence that both Nirma and Emami will soon be battling it out in the cement markets of Eastern India.

What could have been an enthralling saga of their fascinating journey from bean counters to business tycoons - gleaning management and life lessons along the way - has been marred by adopting a guru-shishya dialogue format. The "gyan" that is dispensed may sound to an evolved reader rather elementary, often laced with clichs and time-worn quotes like "Time and tide waits for no one". On how to conduct effective meetings, it is advised that "secretaries of the top bosses should collect all related facts and information for the department or departments and present it before the bosses". To check interruptions, it is suggested the boss hang a 'Do Not Disturb' sign outside his office. But if friends drop in announced, one needs to make time for them (so as not to appear "downright impolite"), but "do not go overboard".

Discourse about market segmentation, socio-economic classification and attitudinal difference between rural and urban consumers are in the same simplistic vein. But, all of it is grounded in strong earthy wisdom, cutting the chase - which is something professional managers and fledgling entrepreneurs can imbibe from the Agarwal-Goenka Gurukul.

The most interesting part of the book lies in "a leaf from my life's book" at the end of each chapter, which by itself could have been a rich read if chronicled in some more detail and depth. There was, perhaps, no need to laboriously plod through management theories like teaching human anatomy to the barber. ~