The first BJP government in South India has squandered its chance to boost growth. The political merry-go-round has resulted in poor governance and uncertainty, dragging down the gross state domestic product.

Bangalore Metro: an impressive sight, it opened last year <em>Photo: Deepak G . Pawar</em>
Goutam Das / K.R. Balasubramanyam
If one were to plot Karnataka's manufacturing hotspots on a satellite map, they would at best be a few small dots here and there, rather chaotically distributed, much like the state of its politics. Three chief ministers in five years has taken its toll on the state and its economy. Weak investor sentiment has taken the sheen off all the cork-popping seen during the state's Global Investors' Meet in 2012 when the government announced that 750 companies would invest about Rs 7 lakh crore in Karnataka.

Industrialist Sajjan Jindal plans to invest Rs 30,000 crore in Karnataka's Bellary district to expand JSW Steel Ltd's annual production capacity to 16 million tonnes from 10 million. But he is holding back - unsure of the availability of iron ore, the main input for making steel, because of uncertainties over mining. Karnataka has 10 per cent of India's total iron ore reserves, and JSW Steel's Joint Managing Director, M.V.S. Seshagiri Rao, says the it has the potential to produce steel not just for domestic consumption, but also for export. But many steelmakers who signed preliminary agreements with the state government have not yet invested in steel plants.

That is unfortunate for a state that has so much going for it. Karnataka is India's seventh largest economy with a 5.5 per cent share of the country's gross domestic product (GDP). Besides highgrade iron ore reserves, the state has abundant lime-stone reserves, required by cement manufacturers. It has large public sector companies such as Hindustan Aeronautics Ltd (HAL) and Bharat Heavy Electricals Ltd (BHEL) and is home to India's Silicon Valley - more than 35 per cent of the country's information technology exports are generated in Karnataka. 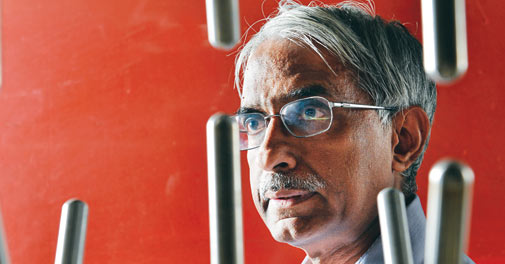 Karnataka has lost out in manufacturing because of instability in the government: S. Viswanathan
But the political merry-go-round has resulted in poor governance and uncertainty. When B.S. Yeddyurappa took over as chief minister in May 2008, he ushered in the first Bharatiya Janata Party (BJP) government in South India. It was meant to be a showcase government for the BJP trying to get a toehold in the south, but that opportunity has been squandered. Going by the current mood, the BJP may well lose the May 2013 election. The Congress stands a good chance to form the government.

Industrialists say the political climate has played a role in dragging down Karnataka's Gross State Domestic Product (GSDP). The state's GSDP grew 7.82 per cent between 2005/06 and 2012/13, behind Tamil Nadu's 9.04 per cent and Andhra Pradesh's 8.81 per cent. Pratik Kumar, President of Wipro Infrastructure Engineering, which is investing Rs 65 crore in an aerospace actuator manufacturing facility near Bangalore, says private investment has fallen eight to10 per cent in the state's manufacturing sector in the last two years.

While the share of services in Karnataka's GSDP has increased since the BJP government came into power in 2008 - from 52.80 per cent to 58.76 per cent in 2012/13 - the share of industry has dipped to 25.91 per cent from 31.34 per cent in 2008/09. Rival states have leapfrogged, and attracted investment that Karnataka could have won, in sectors such as auto manufacturing. While no auto companies have quit Karnataka, its share of new investments has been dismally low. "We have missed out on automobiles. A lot of new units came up in Maharashtra, Gujarat and Tamil Nadu," says S. Viswanathan, Managing Director of agro-processing equipment company John Fowler India and former Chairman of the Confederation of Indian Industry (CII) Karnataka.

"Manufacturers from Hyundai to Renault-Nissan, General Morors, and Volkswagen set up new manufacturing facilities or expanded but none came to Karnataka." Three people familiar with the industry say when Tata Motors decided to shift its Nano manufacturing unit out of West Bengal in 2008, Karnataka pitched for the project but Gujarat moved faster. It assured the Tatas 1,100 acres at Sanand in just three days.

Volkswagen considered Karnataka too - but a former company executive says it finally invested in Pune because of a stronger supplier base in the region. Lost opportunities such as these have meant loss of employment. According to a CII report, Karnataka employs only 10.4 per cent of its workforce in manufacturing while Tamil Nadu employs 17.1 per cent.

Manufacturing in Karnataka has grown at a slower pace than in other states. Factory growth, after being flat in 2008/09 and 2009/10, increased 26 per cent in 2010/11, according to the Ministry of Statistics and Programme Implementation.

However, other leading states were far ahead - factory growth in Andhra Pradesh was at 53 per cent while Maharashtra was at 43 per cent, Tamil Nadu at 38 per cent and Gujarat at 37 per cent. In many ways, the state's economy has remained a oneindustry wonder. Karnataka has consistently led in information technology services, with more than 30 per cent share of software exports from its Software Technology Parks of India (STPI)-registered units. The number is even higher when exports from outside of STPI units are considered. STPI exports of secondplaced Maharashtra account for about 20 to 23 per cent of the national share. According to the Karnataka government, over the last decade, the number of information technology companies has trebled to more than 2,100. The state is also poised to become the start-up capital of India - 41 per cent of the new ventures in the country are located in Bangalore, according to a World Startup report.

While Karnataka is likely to retain its edge in information technology, it needs to improve in other areas such as road infrastructure and power to attract industry. Factories in Karnataka face daily outages, though the state's power supply problem is less severe than that of its southern neighbours.

Manufacturing may be distressed, but the government's sops to the agricultural sector have had a positive impact on farming and coffee production. Seventy per cent of India's coffee is grown in three districts of Karnataka - since 2009/10, both coffee production and exports have galloped in the state as well as the country. Karnataka's coffee production is seen climbing to 227,000 tonnes this year from 200,000 tonnes in 2009/10.

Coffee prices move in tandem with international markets, but planters such as 52-year-old T.N. Durge Gowda of Chikmagalur have no complaints. In addition to growing coffee on a 15-acre plantation, he has also developed a one-acre nursery for saplings of crops such as coffee, pepper and oranges. Thanks to enterprising farmers such as Durge Gowda, the area under horticulture in Karnataka is growing at five per cent a year, and horticulture crop production at six per cent. "The share of the horticulture sector is 40 per cent of the overall agricultural income of the state," Chief Minister Jagadish Shettar said in his Budget speech on February 8.

Karnataka recorded an average growth of 5.11 per cent in agriculture and allied sectors between 2005 and 2012, according to Planning Commission figures. In the same period, Andhra Pradesh was close at five per cent, while Tamil Nadu was at 4.56 per cent. Some 57 per cent of Karnataka's workforce works in agriculture.

The state is now pinning its hopes on horticulture productivity which officials say will mitigate or eliminate rural poverty in the next few years. As of now, horticulture exports bring about a billion dollars in revenue to the state, close to 10 per cent from gherkins alone.

"Karnataka is now running neckand-neck with Maharashtra in horticulture production, but seeing the speed at which we are moving, Karnataka might soon beat Maharashtra," says R.S. Deshpande, Director at the Institute for Social and Economic Change (ISEC), a Bangalore-based think tank. It is time Karnataka replicated this record in the manufacturing sector, too.