Three years ago, the Khorakiwalas had no choice but to sell 10 of their hospitals. They are now successfully rebuilding their hospital network.

Every time she is asked a question, she looks at her father, Wockhardt Group Chairman and CEO Habil Khorakiwala, to check if he wants to answer it instead. She does the same after replying to a query as well, seeking a nod or at least a look of approval.

The discretion is characteristic of the cautious approach the Khorakiwalas are taking while rebuilding their hospital network, three years after selling off part of the business to Fortis Healthcare to tide over a financial crisis.

"It (the sale of hospitals) was not something I wanted to do," says the 70-year-old patriarch, seated in the ninth-floor conference room of the group's headquarters in Mumbai. "But, looking at the overall circumstances, it was something I had to do."

Wockhardt Hospitals, originally called First Hospitals and Heart Institute, was one of the early movers among corporate health-care chains. It started with a medical centre in Kolkata in 1989 and a heart hospital in Bangalore two years later. It quickly gained a reputation in the tertiary health-care segment, comprising specialised fields such as cardiology and neurology. The privately-held hospital chain stepped on the gas in the new millennium by increasing its presence in Tier-I cities and foraying into smaller ones as well, starting with a hospital in Nagpur in 2004. In the next five years it added 12 more hospitals. But this came at a cost. Its net debt crossed Rs 500 crore in March 2009. It had even planned to go public in 2008 to raise about Rs 800 crore but withdrew the offering due to poor investor response.

Apart from running hospitals the Khorakiwalas also manufacture pharmaceutical and related products under their flagship company, Wockhardt Ltd. Khorakiwala himself is a pharmacist by training. But even as Wockhardt Hospitals ran up debts, Wockhardt Ltd too posted losses in 2008, the first year it had done so since going public in 1992. It had a consolidated net debt of nearly Rs 3,600 crore and defaulted on repayment of foreign currency convertible bonds of more than Rs 500 crore.

It then opted for a loan recast and divested its animal health and nutrition businesses. In August 2009, Wockhardt Hospitals sold off 10 of its hospitals in Bangalore, Mumbai and Kolkata, including two which were under-construction, to Fortis for Rs 909 crore. It was left with seven hospitals, comprising about 800 beds in Navi Mumbai and Tier-II cities such as Nagpur, Nashik and Surat.

Wockhardt Ltd has since returned to profitability and is close to exiting the debt recast process. In 2012, its share price jumped nearly six times compared with a 25 per cent rise in the Sensex. The hospital business, too, is looking up.

Zahabiya, Khorakiwalla's only daughter and the youngest of his children, was named Executive Director of Wockhardt Hospitals in March 2010 when she was 27. Soon she was appointed its managing director. "I was interested in the hospital business because you are not just selling a product. It's much more than that," says Zahabiya, who graduated in Psychology from New York University and holds a management degree from the Indian School of Business, Hyderabad as well. "There are a lot of complexities and the core of the business is clinical care." 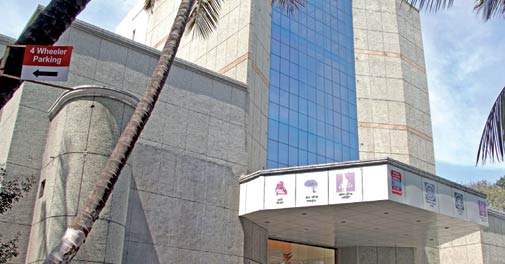 A Wockhardt hospital at Nashik, a Tier-II city it is focusing on.
Six months after she took charge, Wockhardt opened its first new hospital since the Fortis deal, with 180 beds, in Goa. Next on the list is a 22-storeyed, 350-bed, Rs 350 crore super-specialty hospital in South Mumbai. likely to start functioning by June 2013. It will have the largest number of beds among the Wockhardt hospitals. The company is also working on a 300-bed hospital in Delhi, to cost about Rs 300 crore and likely to be operational by 2015.

The expansion plan may give the impression that Wockhardt Hospitals is back to stepping on the gas. Far from it. For one, it is not relying on debt for expansion as before. "After a fairly aggressive expansion before 2009, they are now quite cautious," says a health-care consultant in Delhi who does not wish to be named. The Mumbai project was financed with internal accruals. The company says it is net cash-positive, but will not disclose figures.

Zahabiya says the company chose to build the Mumbai and Delhi hospitals one after the other - and not simultaneously - so as not to put pressure on its cash flows. Industry leaders Fortis and Apollo Hospitals, with 12,000 and nearly 8,000 beds, respectively, may be far ahead of Wockhardt, but rapid expansion is the last thing on her mind. "It's not about scale for us. It's about setting clinical benchmarks," she adds . Her father agrees. "We do not see the need to be pan-India players," he says. He is tight-lipped about the company's plans, though he says the focus on Maharashtra and Gujarat, and Tier-II cities will continue. Zahabiya adds that the company will continue to focus on the tertiary care segment and that Tier-I and Tier-II cities will contribute equally to its revenue after the Delhi hospital becomes operational.

Industry experts endorse the company's strategy. "Being a niche player makes business sense. All their hospitals are doing well, operationally and financially," says the Delhi-based consultant. Rana Mehta, Executive Director, PricewaterhouseCoopers India, says regional focus has logistical benefits - it is easier to move doctors from one hospital to another in times of emergency. Vishal Bali, Group Chief Executive, Fortis, too agrees that being a regional player is viable. Bali was CEO of Wockhardt Hospitals before moving to Fortis. He refuses to talk about his former employer, saying only that his years there were "fruitful" and that he is happy the company "is out of the woods".

Wockhardt Hospitals is determined not to repeat its mistakes as it expands again. "Giving up the hospitals was quite painful for Khorakiwala," says a former group employee, who does not wish to be named. "Wockhardt Hospitals is his baby and he wants to prove himself to the world all over again after what happened in 2009."