How LED is driving away darkness in power-starved India

Ever wondered how a type of light bulb suddenly became sexy? Why the new bankable star Ranbir Kapoor, durable old one Akshay Kumar, and the thinking woman's sex symbol Irrfan Khan are appearing in TV commercials asking you to buy LED bulbs?

The short answer is that they are being paid good money to do so. The long one is that companies are paying them that money because they see a pot of gold at the end of the rainbow (or, shall we say the bright white light?).

The Electric Lamp and Compo-nent Manufacturers Association of India (ELCOMA), the lighting industry body, has forecast that LED bulbs will comprise 60 per cent of the lighting industry's turnover in five years, by when it would have grown two-and-a-half-times to Rs38,000 crore a year. 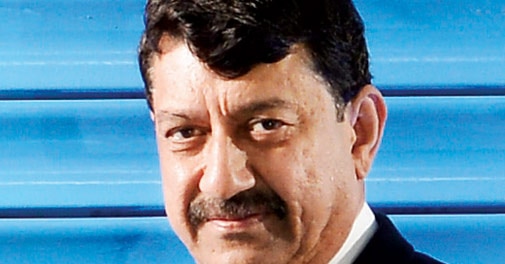 On an average, there is a 50 per cent domestic value addition in LED, says Sunil Sikka, President, Havells
The power situation in the state was becoming precarious. With gas from Reliance Industries' wells in the Krishna-Godavari river basin drying up, several of its power plants have been running at a rate much lower than their capacity. The state has a peak-time power deficit of 397 MW, or 5.6 per cent, during the April-February period of last fiscal, according to the Central Electricity Authority.

Chief Minister N. Chandrababu Naidu, who has a reputation for being tech-savvy, was clutching at straws when he found the solution in LED. Within six months of his launching the Efficient Lighting Programme in October last year - it could just as well have been called the LED lighting programme - Andhra's need for power fell by 250 MW, or 3.5 per cent.

This is just the beginning. Once fully implemented, which it should be by March 2016, Naidu's LED drive is expected to reduce his state's need for power by 1,300 MW, or 18 per cent. If he had to produce this power, instead of reducing the need for it, the cost would have come to Rs 8,000 crore, not counting the time it would take to build them.

Prime Minister Narendra Modi, who launched a scheme for Delhi to replace incandescent bulbs, called LED bulbs "prakash path" - the path to light. It was more economical to conserve power, he said, than to produce it.

Leading lighting industry players, including Philips, Havells, Bajaj Electricals and Crompton Greaves, are working overtime to carve out the largest possible slice of the pie for themselves. In the process, LED prices have been falling. In a matter of just 12 months, the lowest quoted price for bulk supply of a seven-watt LED bulb has come down from Rs 310 to Rs 104, helped along by a fall in the price of imported LED chips.

But more than the opportunity for companies, there is the opportunity for the country. Lighting consumes 19 per cent of the electricity consumed in India. The global average is just 13 per cent. A large-scale LED adoption will bring the figure for India down to the global average, cutting the country's electricity need significantly. "We are looking at savings of nearly 100 billion units of power through the use of LED lights, translating into $7 billion annually," Power Minister Piyush Goyal said at a public event in New Delhi in March. LED bulbs, he said, would replace incandescent ones - the round, yellow ones that protruded out of electrical points before CFL became fashionable - in three years.

LED uses half the electricity used by CFL, and just a tenth of what an incandescent consumes. The lighting industry has voluntarily decided to suspend production of the 100-watt incandescent bulb. For the rest, it will keep reducing the wattage till it reaches 25. "It will take some time to shift to LED unless there is a ban," says Sumit Joshi, Head (Marketing) at Philips, which is a supplier in Andhra.

But a complete ban may not be received very well by buyers because, for all its faults, an incandescent costs just about Rs10 or so. CFL, though, is in rough weather. 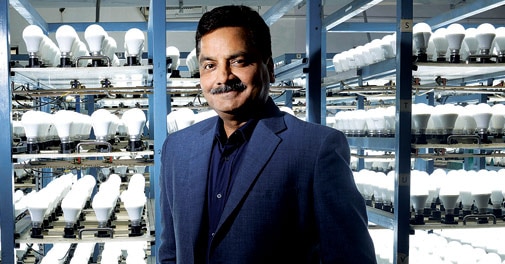 Arun Gupta, CMD of NTL, at his Noida LED manufacturing facility
With falling LED prices, CFL scores low on the price as well as electricity consumption. No wonder it seems to be going the same way as compact discs for watching movies. They shone for a brief period, replacing something that had lasted decades - incandescent bulbs and cassettes - only to be overtaken by the march of technology. What DVDs and blue ray did to CDs, LED might do to CFL.

"Low-quality CFLs (read cheap) made the concept popular but eventually lost out on durability, which is key for Indians. Restrictions were imposed on CFL imports and that is how CFL manufacturing picked up in India," says Sunil Sikka, President, Havells. His corporate office on the Noida-Greater Noida Expressway switched to LED two years ago.

India is now the second-biggest CFL manufacturer after China. But the industry expects many of those factory lines to start churning out LED. "Many say there will be no CFL two to three years from now," says Joshi, whose company produces every third CFL sold in the country.

LED manufacturers continue to rely on imports for chips since its production costs a lot and the technology is patented. There is, however, some work done on them in India to make them suitable for use. "On an average, there is a 50 per cent domestic value addition in LED," says Sikka.

All told, there is sufficient conviction in the government - the Centre as well as states - to plump for LED. Four central government power utilities have joined hands to set up Energy Efficiency Services Limited (EESL). It has been roped in by Andhra Pradesh to procure and distribute LED bulbs to households in partnership with the state's power distribution companies. It has also installed LED street lamps in Vishakhapatnam through a deal with the Greater Vishakhapatnam Municipal Corporation. When Cyclone Hudhud destroyed 70,000 street lamps last October, they quickly installed LED in their place.

For Andhra, EESL has bought LED bulbs through a tender at Rs 200 apiece. It distributed two to each household in select districts for Rs10 each and in exchange for two incandescent bulbs of 60 watts, which are crushed. Each replacement reduces the load by 53 watt. It has already distributed four million LED bulbs in just three districts.

EESL will get back the Rs 80 crore it is spending over five years. "The discoms (distribution companies) will repay us from their savings," says Saurabh Kumar, EESL's Managing Director. Discoms will pump in less electricity to meet the peak-hour demand of households. The power thus saved can be sold to commercial and industrial establishments, which are charged at higher rates.

Lower household demand also means lower transmission and distribution losses. The net gain to discoms could be Rs 75 crore over five years, after paying EESL back.

There is huge demand for LED from hospitals and offices, which need a lot of lighting and stand to recover quickly their cost of moving to LED. "Institutions that use lighting 24 hours a day, seven days a week, will recover in nine months compared to 24 months for a household," says Rakesh Zutshi, Managing Director of Halonix, a lights maker backed by private equity firm Actis.

To be sure, EESL is not doing charity. Says Kumar: "We earn 15.5 per cent return on equity. There is no subsidy involved and this model can be replicated across the nation."

That it is - slowly, but surely. Delhi, following in Andhra's footsteps, has launched a scheme that has EESL partnering with its three discoms - BSES Yamuna, BSES Rajdhani and Tata Power - but with a twist. Unlike Andhra, here you need to pay for the LEDs you get, though the payment is staggered and you don't need to give anything in exchange.

The average price for the national capital, arrived through tenders, works out to Rs104 apiece. Buyers pay Rs 10 upfront for a bulb, while the remaining Rs94 will be recovered in nine-monthly instalments of Rs 10, and Rs 4 in the tenth month.

That should not pinch since a household is estimated to save Rs 162 per LED every year in electricity bill. It also gets a free replacement up to three years.

Delhi will soon switch to LED for lighting up its streets, an important aspect for a city not known for ensuring safety of its women. The city has 500,000 street lights. The municipal corporation will not have to pay a penny upfront, it will repay EESL over seven years. EESL plans to replace nine million street lights in 100 cities.

An LED drive is going on in Tripura, Manipur, Nagaland and Meghalaya. Other states, too, are launching their own programmes to replace incandescent bulbs, but they are in early stages and details are still filtering through. However, the LED story is not without its dark patches.

Though prices in bulk order through tenders have crashed to Rs 104 apiece, you won't get anything in a shop for less than Rs 300 to Rs 400. Some also complain about the rapid tenders floated by EESL.

"EESL tenders have brought the industry to a very competitive zone. People are working on wafer-thin margins and just covering costs. But it is good that the market is developing," says Arun Gupta, CMD of Noida-based NTL Electronics.

"These tenders are coming fast and domestic capacity is not there. Some players are procuring from China and supplying it in the tender," says Joshi of Philips.

Agrees Zutshi of Halonix: "Traditional players have been slow to move to LED since whatever they were producing was getting sold. Those with a global presence were quick to react." Indian units of multinationals Philips and Osram have been more active.

EESL financed all the lights and the municipal corporation will repay it from the estimated 50 per cent reduction in power bill. The maintenance cost is also low for LED street lights compared to yellow mercury lamps. LED lamp costs thrice compared to the Rs3,000 for a mercury street lamp which normally lasts only 18 months compared to 3-5 years for LED lamps.

Of the estimated 1.15 billion bulb points in the country, incandescent bulbs shine on 800 million and CFLs on 350 million. Is that the challenge or the opportunity? Tenders, margins, and prices will tell.