News
Magazine
Features
Indian Inc. wakes up to the opportunity in logistics

Indian Inc. wakes up to the opportunity in logistics

Sensing opportunity at an estimated $100 billion market, Indian conglomerates Future Group, the Tatas, the Mahindras and TVS entered the logistics market - a sector fast becoming attractive not just for the money, but also the absence of fourth-party operators in India.

Future Supply Chain Solutions' warehouse near Mumbai
Suman Layak / Geetanjali Shukla
At the warehouse of Future Supply Chain Solutions in Bhiwandi, on the outskirts of Mumbai, a worker scans the label on a packet of shirts. Little red bulbs light up to tell her how many shirts to put into which box. Each box will go to a different store, and the lights guide her based on the orders received from the stores. This technology, called 'putto-light sorting', is 99.9 per cent accurate, compared to manual sorting, where accuracy is as low as 65 per cent. It is also faster. In contrast to the dull, grimy images that the word 'warehouse' brings to mind, high-tech sorting piques the interest of all kinds of people, if the popularity of videos on sites such as YouTube is any indication.

WATCH: How the Future Group's unit in Bhiwandi works

"I want to make supply chain management sexy," says Anshuman Singh, Managing Director and CEO at Future Supply Chain Solutions, which is part of the Future Group. "It's not just about dusty trucks and dark warehouses. It's also about technology, efficiency and profits. In building our infrastructure, we realised that we were at least half a decade ahead of the competition. That's when we decided to hive off the arm into a separate company and offer services to others," he says. Logistics in India is set to boom. Click here to Enlarge
Some insiders peg the market at $100 billion, or Rs 4.5 trillion (1 trillion equals 100,000 crore), and see it growing at a cumulative annual rate of 25 per cent in the next three to four years. Others estimate that logistics is bigger than even the automotive sector, and accounts for 13 per cent of GDP. The industry is highly fragmented: the top 10 players earn just two per cent of revenues.

Sensing opportunity, at least three Indian conglomerates, besides the Future Group, have taken bold steps in the past three years. They are the Tatas, the Mahindras and TVS. Others, including Reliance Industries, have also made logistics forays, but none of them can match the above four for scale of operations and the amount of business they can draw from outside the group. A host of acquisitions has also taken place in the sector, with Indian firms such as TVS buying overseas, and foreign companies such as Hitachi Transport System and Nippon Express buying in India. Private equity deals and entrepreneurship have picked up pace too.

Gagan Seksaria, Associate Director for Transport and Logistics at consultancy KPMG, says: "Credible thirdparty players in logistics have emerged. Companies feel confident to hand over their logistics functions to them. So large groups that already had logistics arms now see the opportunity, and feel confident to spin them off as separate businesses."

MUST READ: How TVS' logistics arm is faring

That is what the Future Group did, as well as the Tatas. Ironically, the latter's largest logistics company, Drive India Enterprise Solutions, or DIESL, came out of a telecom venture. The company was originally created in 2003 to support Tata Teleservices.

Ajay Chopra, CEO of DIESL, says it now earns Rs 1,100 crore in revenues from its trading business, and Rs 300 crore - more than 20 per cent - from logistics. DIESL has 4.5 million sq. ft. of warehousing space across the country, and hopes to grow the logistics arm at 100 per cent annually. "We now serve 85 per cent of the country's PIN codes," says Chopra. DIESL serves non-group companies such as Huawei and Mercedes-Benz India, besides group firms such as Voltas, Tata Motors (vehicle placement and delivery) and Croma. 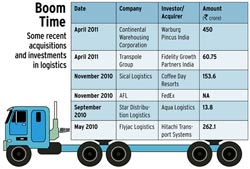 Click here to Enlarge
Around 45 per cent of its logistics business comes from non-Tata companies. Chopra says the company follows an asset-light strategy - it does not own warehouses or trucks, but works with third parties and focuses on managing them for clients.

The group has other logistics plays, too. TM International Logistics Ltd., or TMILL, a 51 per cent subsidiary of Tata Steel that is engaged in shipping, chartering and port management, has leased berths in Haldia Port. TKM Global Logistics is a subsidiary of TMILL. Recently, the Tatas appointed Juzar Mustan as the Country Head for TKM. Mustan was the CEO of AFL's logistics division when it was taken over by FedEx.

Explaining why large conglomerates create logistics companies, Mustan says: "A factory looking to double production capacity may have a sudden need for 600 to 800 customised transport vehicles to move plant, machinery and equipment over a short span of two to three months."

Think of the Tata Nano plant shifting from Singur to Sanand. "Such demand cannot be fulfilled by any one transport service provider, who would find it difficult to redeploy the vehicles after the spurt in demand was over. A logistics arm competing in the market would be better able to manage this by aggregating demand across several customers and verticals," he adds.

As with the Tatas, Mahindra & Mahindra's logistics play grew out of the group's needs - specifically its automobile business - 10 years ago. Today, Mahindra Logistics, with revenues of more than Rs 1,000 crore for 2010/11, has two verticals: supply chain management and people transportation. The international division of Mahindra Logistics was started six months ago. The company is scouting for a partner in China and building its business in the US, two of India's largest trading partners, and also countries where M&M has a strong presence. But Mahindra Logistics' main focus is on leveraging its strengths at home. Ajay Chopra, CEO, DIESL
The company's CEO, Pirojshaw Sarkari, says: "In the last five years, all the big names in the logistics business have come to India. Given the country's size and cultural diversity, they will need a local partner." He sees a tremendous boost for the sector from the planned rollout of the Goods and Services Tax, or GST, growth in organised retail, and the development of cold storage facilities, agricultural warehouses, and free trade warehouse zones. The company plans to set up four mega warehouses (500,000 sq. ft. each) and five small ones (150,000 sq. ft. each) across the country. It is among the top three logistics players in the auto segment. Currently, 60 to 65 per cent of its revenues come from the Mahindra Group.

Others are venturing into foreign countries more eagerly than the Mahindras. TVS Logistics Services, for instance, has been relatively aggressive overseas. In January, it bought US-based logistics service provider Manufacturers Equipment & Supply Company, or Mesco. This came soon after its November 2010 purchase of UK-based logistics company Multipart Holdings. R. Dinesh, CEO of TVS Logistics, says: "We were clear from day one that we will not be just the group's logistics company. We saw opportunity in the logistics space and ventured into it."

In 2008, Goldman Sachs invested Rs 100 crore in TVS Logistics, which recorded a turnover of Rs 1,300 crore in 2010/11 and has been growing at a compounded annual rate of 54 per cent for the past five years. TVS Logistics, started in 1996, is the oldest of the four companies, while Future Supply Chain Solutions is the youngest. Singh insists that India is where the action is.

"Consumption patterns in the developed world are more or less standardised, but they are still evolving in developing countries. Designing and managing supply chains in emerging economies is a far greater challenge, and we're the only company in the country that has the wherewithal to meet it," he says. Future Supply Chain Solutions has six million sq. ft. of automated distribution centres across the country, and plans to add another nine million before the GST rollout. It aims to concentrate on organised distribution, which yields higher returns than transport, international logistics, and express services.

"Our four main consumer sectors are fashion, food, home and general merchandise. Each of them has its own unique needs that require 30 distinct supply chain solutions. Our understanding of supply chains has enabled us to rewrite the rules of third party logistics in India," says Singh. The company's current revenue is Rs 300 crore, and is expected to rise to Rs 700 crore by the end of 2011/12.

As with the other three companies, the bulk of Future Supply Chain Solutions' revenues comes from the parent company. But it plans to reduce this dependence from the current 70 per cent to 50 per cent by the end of 2011/12. In 2009, Hong Kong-based private equity firm Fung Capital picked up a 26 per cent stake in the company for $30 million.

"There's good reason for other conglomerates, like the A.V. Birla and Essar groups, to also hive off their logistics divisions," says KPMG's Seksaria. "All the four groups that have done it so far have been successful."

He says the current opportunity looks so lucrative that it has lured even CEOs of large firms, like Sanjay Sinha of Mahindra Logistics, who quit in late 2010 - along with 300 employees - to start Leeway Logistics. Mahesh Niruttan, who headed the Indian foray of Kuwait-based Agility Logistics, quit in April 2011, and many in the industry say he too is about to turn entrepreneur.

Besides lucre, logistics is also an attractive business because of the absence of fourth-party operators in India, where large conglomerates' logistics arms can play a role.

A 4PL player is one that engages more than one 3PL company - say, one to manage transportation, another to forward freight, and a third to handle customs or overseas logistics.

So a 4PL serviceprovider can consolidate the services of various 3PL vendors. This is the space, for instance, that Mahindra Logistics says it occupies when it serves Mahindra Navistar Automotives and its other international customers.

The key to moving up the logistics value chain and becoming a 4PL player is technology. Future Supply Chain Solutions has automated nearly all aspects of its operations. All its trucks have a GPS/GPRS-enabled system so shipments can be tracked from pick-up to delivery.

"This gives power to the customer, who can now track consignments in real time. But it also leaves us with no option but to operate efficiently," says Singh. Mahindra Logistics plans to invest $50 million in technology over the next five years. "An increasing number of customers wants less of inventory and more of just-in-time products," says Sarkari. "Technology will help us do that by improving predictability and transparency in the system."

The sector is also likely to benefit substantially from GST, as it will enable companies to streamline operations by setting up warehousing hubs, rather than having warehouses in each state.