While PM Modi's attempt to build a global luxury brand so far has been bang on, and he is confident of being profitable by the end of year three, the big question, however, is, whether the global connoisseurs of luxury take him as seriously. Will they prefer a Nirav Modi jewel to a Cartier or a Tiffany?

Jewellery designer Nirav Modi became the first Indian luxury designer brand to have a 1,000 sq. ft store in the most luxurious address of New York, Madison Avenue, last year. The Nirav Modi store shares space with legendary brands such as Chanel, Hermes, Prada and Gucci, and the designer is known to be shelling out a whopping $1.5 million a year as rental for the store. The store launch was graced by celebrity guests such as US presidential contender Donald Trump, Hollywood actress Naomi Watts and leading model Coca Rocha. Modi even walked the Red Carpet at the Oscars alongside Kate Winslet, who was adorned in a Nirav Modi jewel. Thereafter, he has opened stores on the Old Bond Street in London, Hong Kong and Macau.

While Modi's attempt to build a global luxury brand so far has been bang on, and he is confident of being profitable by the end of year three, the big question, however, is, whether the global connoisseurs of luxury take him as seriously. Will they prefer a Nirav Modi jewel to a Cartier or a Tiffany?

India may be associated with Maharajas and royalty, and boast a heritage of intricate craftsmanship, but the fact remains that Indians have only supplied their luxurious crafts to other global brands and have seldom invested in building their own brands. Gucci or Chanel may be buying the fine embroidery on their outfits from India, but when a local embroider tries to set up a global luxury brand, it becomes an uphill task. Modi's jewels fetched a whopping `60 crore at the Christie's auction way back in 2010, which gave him the confidence of building his own global luxury brand. However, unlike a Cartier or a Tiffany, which have a heritage of over 100 years, brand Nirav Modi is barely five years old. "In India, luxury is still finding its feet. The European brands have withstood the test of time, and to break into that market, you are breaking into 100 years of establishment," explains Divya Thakur, Founder of luxury design consultancy, Design Temple. 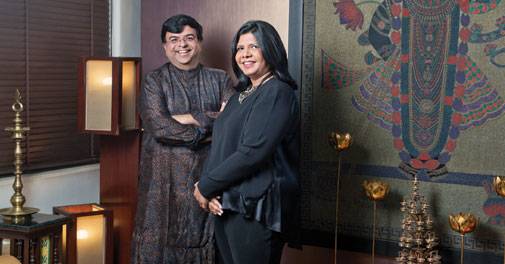 While it may be nice for a luxury brand to have an element of heritage and history, luxury branding specialist Alok Nanda, founder of Alok Nanda & Company, claims that luxury in the contemporary world is more about building the craft, authenticity and narrative. "If you don't have heritage, you should have a convincing story to tell." The first ingredient of a convincing story is obviously the superior quality of the brand, and this is where most Indian luxury brands are trying to score.

When Neelkanta Jagdale, Chairman, Amrut Distilleries, launched Amrut Single Malt Whisky way back in 2004 in Scotland, the intent was to give the Scottish single malt brands a run for their money. Jagdale succeeded in doing so and his brand today shares shelf space with leading brands in premium stores such as Harrods and Waitrose in London and other premium retailers in as many as 80 countries. Similarly, Nirav Modi claims the designer is all about authenticity. A third generation diamantaire, he claims that the finest diamonds go into his jewellery. "We spend hundreds of hours creating even a small jewel. If we make a large necklace, it takes us a minimum of 2,000-3,000 hours," he explains. Meanwhile, Hidesign, the premium leather bag maker, is all set to launch its luxury offering, Atelier. Founder Dilip Kapur is trying to build upon the artisinal skill involved in creating the brand. He says that the bags are handcrafted by 12 highly skilled craftsmen, handpicked from the team that makes Hidesign products. "This is a fine moment for anything with quality to stand. Any brand that delivers excellence, vision and strategy can succeed,"agrees Thakur of Design Temple.

After being in the over five-decade-old family embroidery business and having worked for most of the leading global luxury brands, Mehta and Gada decided to create a luxury brand (Forest Of Chintz) of their own. The idea was to fill the void of a truly global Indian luxury brand. They also had a perfect start. They were invited to showcase their embroidered bags and accessories at the SS13 show of the Paris Fashion Week. "Working in the luxury space was an advantage only from the point of view of understanding your product and quality. The challenge has been to build the brand," says Gada, who feels that it is a herculean task to build a global luxury brand sitting in India. "You have to picket yourself in a couple of places across the world. You need to have PR, publicity done for you on those locations, which often tends to become expensive," she explains.

Most Indian luxury brands also suffer from short-sightedness. So, if you are an Indian brand, you don't think global. Nirav Modi claims that he realised it rather early. "When you look at any luxury product, it's not created for different markets, it's the same in all markets. We take care that our jewellery is not ethnic Indian, but it's global in its appeal." Agrees Gada of Forest Of Chintz. "In order to be a luxury brand in the true sense, you also need to source and manufacture from across the globe," she adds. "We tried printing our scarves in India, but we didn't get the quality, so we printed them in Italy. Similarly, we make bags out of Hong Kong."

Nirav Modi says that he will open six stores every year, out of which four would be in international markets, which have a high concentration of the wealthy. Again, a great strategy for a luxury brand. Modi says that the store he has leased on Old Bond Street in London was bought for the highest ever per sq. ft price in London by the investor. Apart from the rentals, which could be anywhere between $2,000 and $3,000 per sq. ft per year, a tenant also has to pay 'key money' to the previous tenant. Though Modi avoids answering the kind of key money he has paid, he says that a tenant for a 300-sq. ft store on the same street, had paid the earlier occupant 8 million as key money just a few months ago.

To get the desired return on investment, Modi says that his store has to generate an annual turnover of $25 million. Incurring such high costs is not the cup of tea of most Indian luxury brands, who have no choice but to be happy retailing out of multi-brand luxury stores. This, indeed, is limiting, but brands such as Forest Of Chintz and Amrut Whisky have ensured that they are available in a few high-end retail stores so that they are able to maintain exclusivity.

However, Kapur of Hidesign has a different strategy for his upcoming luxury brand, Atelier. He says he will take it abroad, but only to emerging countries such as South Africa, Russia and the Middle-East. "Luxury may be synonymous to Europe, but the whole of Europe is going through severe recession. The emerging economies have far higher spending powers." The likes of Forest Of Chintz are looking at strategic partners to establish themselves firmly in the global luxury market. "We want to raise money with someone who understands the business and will fill the gaps where we are weak," says Mehta.

Indian luxury brands are indeed putting their best foot out to carve a niche in the global luxury market, but it's certainly going to take them a while to find their feet.