Though wind power companies like ReGen and Gamesa Wind Turbines have some distance to go, they are fast adding capacities.

K.R. Balasubramanyam/G Seetharaman
Once, the Chennai-based Khemka family had diverse interests ranging from cement and paper to textiles and agrofoods. It was best known for its domestic carrier, NEPC Airlines. By the late 1990s, however, the debt-laden group exited many of its businesses, including aviation. Even as these ventures floundered, one subsidiary, a windmill manufacturing company, remained successful. Headed by Madhusudan Khemka, the company served as an incubation ground for a few who would later make it big in the wind energy sector.

Khemka quit the group in 1997 following differences with his uncle, Raviprakash Khemka. Over the next few years he stayed away from the sector, focusing on a small BPO unit instead. When the Anil Ambani-owned Southern Wind Farm bought NEPC'S wind business in 2006, it paved the way for his return. The following year, Khemka launched ReGen Powertech, a wind turbine manufacturing firm, with the backing of Hyderabad-based Nuziveedu Seeds. R. Sundaresh, who was also with NEPC, is a co-founder of the company. The Khemka-Sundaresh duo holds 18 per cent in ReGen. 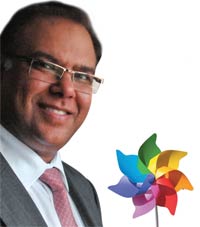 Madhusudan Khemka, MD, ReGen Powertech
The Chennai-headquartered company's first project was a 50 MW wind farm in Karnataka's Chitradurga district, which was commissioned in September 2009. Since then, it has not looked back. In 2008/09, its first year of commercial operations, ReGen had modest revenues of about Rs 160 crore.

That shot up to Rs 1,232 crore in 2010/11 and is projected to have crossed Rs 2,500 crore in 2011/12. "I've known the sector since I was 22," says the 48-year-old Khemka. His company's performance underlines just how well. In the last three years, Khemka has increased the firm's installation performance six times, revenues five times and profits 11 times. "Our order books are almost closed for this year," he says.

According to Indian Wind Turbine Manufacturers Association data for 2011/12, Tulsi Tanti's Suzlon Energy, in the industry for 16 years, remains No.1 with 1,180 MW of installed capacity. Yogesh Mehra's Enercon India is second, with 767 MW, while ReGen has risen to the third place with 416 MW. Gamesa Wind Turbines, the Indian arm of Spanish turbine maker Gamesa Corporacion Tecnologica, is fourth. The company, whose operations are only three years old, commissioned 297 MW in calendar year 2011. Its revenues doubled to Rs 2,400 crore during the year, accounting for 12 per cent of its parent's revenues.

Click here to Enlarge
Ramesh Kymal, the man driving Gamesa's growth in India, worked with Khemka in NEPC from 1994 to 1996. Today, the two compete against each other for every single deal. But Kymal, CMD of Gamesa Wind Turbines, insists there is no rivalry. "We are friends. We don't consider ourselves competitors," he says. Kymal, who was MD of Vestas India before joining Gamesa, adds that before founding ReGen, Khemka had helped him win some orders. "His heart was always in wind so I told him, 'Why don't you start a company?'"

Gamesa got its break in India last year, when Mytrah Energy (earlier Caparo), an independent power producer, gave it a Rs 9,030 crore order. The order, for projects totalling 2,000 MW, will be implemented over five years. Vikram Kailas, MD of Mytrah Energy India, says there was no precedent for such a long-term contract. He adds that Gamesa was selected because it was willing to commit to a fixed price for a five-year contract. "And they planned to manufacture turbines here, which would bring down the cost."

But Khemka has been ahead in terms of orders. In October 2010, Tata Power stunned pundits by giving ReGen a Rs 900 crore order for 150 MW farms in Tamil Nadu and Maharashtra. After these were commissioned in September 2011, the company placed another order of the same size with ReGen. "We currently have 850 MW of projects under implementation, and land for another 3,800 MW capacity is in various stages of acquisition," says Khemka.

In North America and Europe, the role of the wind turbine manufacturer is limited to supplying turbines. In India, most investors have little or no expertise in wind energy development. So, many turbine manufacturers handle wind power projects from concept to commissioning for independent power producers (IPP) and other clients. This includes identifying wind sites, buying land, getting approvals, erecting and commissioning the turbines, and signing power purchase agreements.

The concept-to-commissioning model, pioneered by Suzlon Energy, has worked well in view of the myriad procedures involved in taking possession of a site in India. Gamesa has two plants in Baroda and one in Chennai, and a fourth under construction in the Tamil Nadu capital. The company plans to double its annual production capacity to 1,500 MW next year. Click here to Enlarge
ReGen's 1.5 MW wind energy converters or turbines (branded V77, V82 and V87) are gearless and manufactured under a technology agreement with Vensys of Germany. The company has a manufacturing facility in Nellore district, Andhra Pradesh, and another coming up at Udaipur, Rajasthan. Soon, both will have a combined production capacity of 750 MW (from 540 MW now).

"ReGen has people with a long track record in the sector. It has good wind sites and the machines are good," says Sumant Sinha, Chairman and CEO of ReNew Wind Power. Sinha quit Suzlon two years ago to start ReNew Wind. His firm, too, has placed a large order with Khemka and is also in talks with Gamesa. To control costs, ReGen has been manufacturing turbines with more indigenous components. This, says Khemka, could save up to 35 per cent in costs. Kymal's strategy is to manufacture 40 per cent of the parts and outsource the rest. "That way, during a downturn I don't have huge inventory," he says. Jorge Calvet, Chairman and CEO of Gamesa Corporacion, believes that producing locally is crucial in the Indian market.

"A local supply chain represents advantages in market knowledge, optimisation of logistics and transportation costs, and proximity to customers," he said in an e-mailed response. According to Vineeth Vijayaraghavan, editor of renewable energy portal Panchabuta.com, not owning the technology could pose problems for ReGen. Khemka dismisses such concerns. "We pay a royalty to Vensys on each turbine sold. The royalty reduces with each year and at the end of 10 years, we will own the technology." The company is planning an initial public offering in 18 months, and, going by a private equity deal with two firms in May, is currently valued at Rs 1,850 crore.

In the last six months, ReGen has raised Rs 152 crore by diluting a nine per cent stake. "We are fully capitalised for this year and can manage our capital expenditure with the equity raised, internal accruals and bank loans," says Khemka. Private equity firm Everstone Capital picked up a 33.3 per cent stake for Rs 100 crore in October 2007, the value of which is estimated at around Rs 600 crore today. "Their (Khemka's and Sundaresh's) infectious enthusiasm gave us the conviction to invest at the pre-revenue stage, a decision that we have never regretted," says Atul Kapur, Co-founder and Managing Partner at Everstone Capital.

Suzlon, meanwhile, appears unfazed by the growing clout of the new entrants. In 2010/11, its share of annual installed capacity fell below the 50 per cent mark for the first time. Last financial year, it accounted for less than 40 per cent of capacity. "We have led the Indian wind market for 13 consecutive years. Today, the market is growing faster than ever, and so is our business. While it may appear like a slip in percentage terms, every year we continue to install more megawatts," the company said in an e-mail. Suzlon hopes to earn 70 per cent of its revenues from IPP customers in 2012/13. 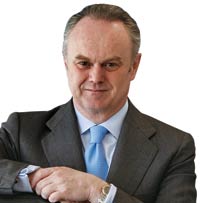 A local supply chain offers market knowledge, optimal costs and customer proximity: Jorge Calvet
For ReGen and Gamesa, the ride has been smooth so far. But the going could get challenging in future for the industry as a whole. There are already around 20 turbine manufacturers in the sector, including small ones. Most of the large and medium ones offer similar concept to commissioning solutions. The intense competition may spark off price wars, exerting pressure on profit margins. Worse, wind energy projects are no longer eligible for tax breaks (accelerated depreciation), which ended on March 31 this year, after more than a decade. Wind capacity installation could fall as much as 1,000 MW this year due to this.

Another factor that goes against the wind sector is its seasonal nature. Wind energy is largely harnessed during a five-month period when winds are strongest.

By 2017, solar power tariffs are expected to reach grid parity, that is, match grid power tariffs, says V. Raghuraman, an independent director with Suzlon. "Whether wind will be able to match solar tariffs is what the industry needs to watch out for," he adds. If it does not, the sector could be in for some trouble.