From inducting professionals to private equity, the Manipal Group is preparing its education and healthcare businesses for the big leap.

The throng of weekend shoppers at Himalaya Mall, on Ahmedabad’s Drive-In Road, may have chanced upon a new store in the city as they relaxed on a Saturday afternoon in Gujarat’s commercial capital. Spread across 5,000 sq. ft with imaginatively designed interiors, Manipal Cure and Care is the latest entry into the medical retail business from the Manipal Engineering and Medical Group (MEMG), an organisation best known for its chain of hospitals and educational institutions spread across the country and, more recently, across the globe. 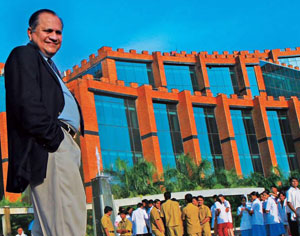 From being a closely-held family business, MEMG has begun to rapidly transform its businesses into professionally-run outfits, as the owners Pais take a back seat and allow professional managers to run the show.

Cure and Care is not MEMG’s only foray. While the company plans to set up 50 or more such outlets (typically located in central business or shopping districts) and earn Rs 250-300 crore annually from this business, it has also invested significantly in other synergistic businesses.

Its Stemputics, a stem cell research outfit, is expected to roll out in to treat a variety of ailments. Manipal Accunova, its clinical research outfit, has been merged with Ecron, a German firm, to give it greater scale and leverage in the key markets of Europe and the US.

On the education side, MEMG has over 1.2 lakh students studying at its institutes (Manipal University being a not-for-profit venture). Here, too, it has acquired and invested in companies to expand its corporate profile. Recently, it bought a 70 per cent stake in a Bangalore-based competency assessment solutions vendor to expand its reach by integrating its operations with Pariksha, its own company operating in a similar market. “We are interested in opportunistic deals that give us an entry into a new or complementary market,” says Ramdas Pai, the 72-year-old Group Chairman of MEMG and the man driving the group’s foray into new businesses.

According to Pai, the transformation from an exclusively south Indian company into first a national and then a global operator began with the company’s foray into Malaysia to set up a medical college (and soon a hospital, possibly), which acted as a launch pad for a much broader corporate expansion.

“This project gave us the confidence in executing large-scale initiatives,” says Ranjan Pai, the 34-year-old heir apparent and CEO of MEMG, who relocated to Malaysia after graduating from medical school in 2002.

MEMG’s education business now has 20,000 students enrolled in formal institutions in India, about 5,000 in full-time programmes overseas and over 100,000 students in flexible education offerings. To fund its expansion in education, the company has raised $70 million in private equity from IDFC.

“We will expand our campuses globally and also invest in companies in the education business,” says Anand Sudarshan, a twodecade IT industry veteran, who joined the group as part of its management overhaul. While MEMG has invested $2.5 million in TutorVista, a provider of remote tutorial services, it is also considering new campuses in West and East Asia.

As the company grows from being a regional operator into a truly national and even global player, Pai realises that he will have to build scale across his businesses and is prepared to loosen his purse strings to stay competitive. In early November, Manipal Accunova acquired Germany’s Ecrona for an undisclosed sum. The combined entity has 265 employees and specialisation across Phases 1-4 of clinical trials.

“Drug development is an expensive business and can take upto 10 years for the entire process to complete. We believe that companies will look to India to make this process faster, not just more efficient,” says D.A. Prasanna, Managing Director and Vice Chairman of Manipal Accunova.

Meanwhile, the company has laid out plans to expand its network of hospitals from 1,600 beds to 3,200 beds in the next two years. According to Ranjan Pai, the company is inclined to look beyond acquisitions and green-field projects and even consider leaserentals to keep costs down.

“We want to become a national brand on the hospitals front. So, we want to go from Manipal and Bangalore to other southern cities and finally to Delhi and Mumbai,” he says. R. Basil, MD and CEO of Manipal Health Systems, says the company recently moved into Vijayawada with a long-term lease for a 350-bed hospital and is now eyeing properties across the country in Kochi, Hyderabad, Mumbai and Delhi. He, too, has raised $30 million from IDFC to support this growth.

After the group split a decade ago (reportedly over the future of many initiatives), Ramdas Pai-controlled MEMG has been trying to steadily change its character. Ever since Ranjan Pai moved to Malaysia, the family has been rapidly distancing itself from the day-to-day management of group companies. “There is not a single family member in any of our companies and just one member on the board,” says the senior Pai.

Gradually, he has ceded close control of his businesses to professional managers. “We want each business unit to be run individually and we will take a minimal supervisory role,” says Ramdas Pai. On the education front, Sudarshan has been given a broad mandate to not only expand its global footprint (with institutes in Antigua in the Caribbean and possibly in Curacao, a Dutch principality off the coast of Miami), but also look to inorganically grow the company’s businesses.

“We want to model ourselves on Tata Sons, especially when it comes to nurturing new companies and providing seed funding,” says Ranjan Pai. Manipal Cure and Care, in fact, was begun with Rs 5 crore in seed funding from MEMG. It then leant on MEMG’s chain of doctors and other medical staff to get people for these centres. Now, it wants to replicate the model for Stemputics, its stem cell research initiative. “They must conceive business ideas and we can provide financial and operational support to them. But, they must eventually be able to fund these initiatives in the long-term," says Ramdas Pai.

Backed by this funding, Manipal Cure and Care now plans to launch at least seven or eight more stores up to March. "Our focus will be on getting prime real estate to set up these stores. We want to target people who don?ft want to enter a hospital-like atmosphere for mainly cosmetic treatment," says Somnath Das, COO of Manipal Cure and Care. This chain will stock medicines and beauty products. Das sums up the gameplan when he says: "We want to be part of the Rs. 1,000 that a customer would spend on movie and dinner and not on the money used in medical emergencies. We want to be a planned retail expense for them."

Elsewhere, Sudarshan is giving the final touches to transform the education business into a global entity. "Our CAGR on student enrolment has been 30 per cent plus over the last five years; we have campuses in Antigua, Dubai, Malaysia and Nepal and learning centres in 15 other countries. We have perhaps the broadest geographical footprint among private higher education institutions from India, and we expect the footprint to expand," he says. Much of this expansion is expected to happen overseas, possibly in Oman, Vietnam and Indonesia.

Challenges Ahead But several hurdles stand in the way of MEMG's ambitions. For one, its education and healthcare businesses are heavily regulated; institutes and hospitals require literally dozens of licences and permits to establish. Its Kasturba Medical College in the eponymous town faces potential de-recognition from the Medical Council of India, which could be a massive hurdle in attracting the best students. Ramdas Pai, however, isn?ft perturbed.

"For 350 medical seats, we got 1.6 lakh applications," he says, adding, "We are among the top 2-3 institutes in this field." Regulatory hurdles have also slowed MEMG's entry into North America. This has compelled the company to set shop in Antigua to attract Indian-American students, its main target audience. Even in Malacca, Malaysia, MEMG had to face the wrath of regulators early on.

But the good news is that Manipal's Antigua campus is growing; three years ago it had 38 students, it has 100 now. Soaring cost for its capital-intensive businesses is another worry.

It costs around $10 million to set up a 250-bed community hospital in a large city and land costs make setting up a greenfield venture almost impossible. In retail, too, MEMG has to balance its ambitious expansion plan with soaring real estate costs in large Indian cities.

"Real estate costs are prohibitive and we worry every day about managing costs," says Somnath Das of Cure and Care. With a plethora of brands and stores at malls and other retail points, he also has a fight on his hands to attract spendthrift consumers to his store. "We need to aggressively build the brand and awareness about our industry," he admits.