Maruti triggers price war with new Alto 800. Will it pay off?

Never before has Maruti Suzuki launched a new version at a price below that of its predecessor. The new Alto is Rs 4,000 to Rs 8,000 cheaper than the old one, depending on the variant.

Sunny Sen
Before the mid-October launch of Maruti Suzuki's new Alto 800, the company set itself a target which is unprecedented in the history of the Indian automobile industry. Maruti called it the "50/20/10 target". It meant that Maruti aimed for 50,000 test drives , 20,000 orders, and 10,000 deliveries - all within the first 10 days.

On the morning of the tenth day, Mayank Pareek, Maruti Suzuki's Managing Executive Officer for marketing and sales, sat in one of the meeting rooms in the company's office in Vasant Kunj, South Delhi, beaming. "We crossed all three targets," he says. "We launched in 821 cities and 1,130 outlets." That morning, the new Alto had crossed 27,000 bookings and 10,200 deliveries. 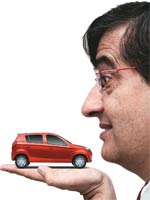 Mayank Pareek, Managing Executive Officer, Maruti Suzuki India Ltd
For Pareek and his company, it was a moment of triumph. The company had just emerged from crippling labour problems. Its net profit was down from Rs 241 crore in the quarter ended September 2011 to Rs 228 crore in September 2012, and about 65 per cent below its level at the beginning of 2012/13. The new Alto had to succeed, no matter what. The company had spent Rs 471 crore over three or four years to build it.

Never before has Maruti Suzuki launched a new version at a price below that of its predecessor. The new Alto is Rs 4,000 to Rs 8,000 cheaper than the old one, depending on the variant. Why would Maruti do that? Is it desperation at India's No.1 carmaker to buy back the three percentage points of market share that it lost in the last six quarters?

"Desperate is a negative word," says Pareek. "We are charged to get back. What is gone is gone. We have to be aggressive." Some in the industry contend that Maruti is starting a price war, but Pareek disagrees. "Price war means you are undercutting others," he says. "We have a competitive advantage."

Arun Agarwal, auto analyst at brokerage firm Kotak Securities, says: "Maruti enjoys huge economies of scale, even at lower margins. No other company can do that." Within 16 days of the new Alto's launch, it has got 35,000 bookings. The numbers are encouraging, but Pareek says it is hard to predict whether these will translate into actual sales and cross the peak number. The Alto accounts for about 22 per cent of Maruti's total volumes and about 25 to 30 per cent of its overall revenues. The Alto's rising sales could hurt the Hyundai Eon and General Motors Spark, which are in the same bracket.

So far, Hyundai has not revised the Eon's prices. A Hyundai spokesperson says the Alto's price is an "introductory price which for sure will be revised next year". Maruti's Pareek concedes that the Alto's current prices are introductory, but declines to say when they will be revised.

The price cut comes at a time when the industry's growth rate is flagging, interest rates are high, input costs have risen, and fuel prices are daunting potential car buyers. The reduced price is intensifying competition in the market in what Abdul Majeed, Partner at PWC, calls the "volume game". He explains that Maruti's pricing may initially cause a price war, but it is important to develop the market three or four years down the line, as it would generate high volumes. "If you can't sell 200,000 to 300,000 cars, you can't make money," he says. In the short term, margins will feel the pinch, but in the long run the move will be beneficial, as small cars still make up 70 per cent of the Indian car market. "Car makers will have to take the risk," says Majeed. "It is extremely difficult to bring down prices and yet be profitable," says Pareek. Maruti Suzuki could pull it off because it found ways to cut production costs. For instance, the robots used in the factory cost $20 million each. Maruti made its own robots for $1 million apiece. The company also decided to reduce the weight of every component in the car by one gram, which would reduce the car's overall weight and thus improve its fuel efficiency. The new Alto is 16 per cent more fuel-efficient than its predecessor.

The launch of the new Alto is timely, says Akshay Bhalla, Managing Partner of Protiviti Consulting. He points out that the older version was almost 10 years old and in need of an overhaul. Generally, a model gets refreshed every three to four years, he says. It helps that Tata Motors's Nano has not taken off.

With its current pricing, the new Alto could fill the space that Nano has created, says Bhalla. After a rough year, Maruti needs to justify major investments such as its new factory, and increasing volumes is one way to do it. The Alto fits the bill. The new Alto has more than 100 changes, including more interior space, a choice of interior colours, and airbags in the top-end model. Some 52 per cent of Alto buyers are first-time car owners, and more features make a difference in this segment.

This may not be the automobile industry's best year. At current prices, Maruti Suzuki will not make much money from the Alto, but then it can afford not to. Had labour troubles not halted production, it would have increased its market share by 1.2 per cent, says Pareek. With the Alto's initial success, Pareek may be relieved, but his rivals are watching closely.