The financial logic apart, HDFC Bank will gain massive management bandwidth from its merger with Centurion Bank of Punjab. 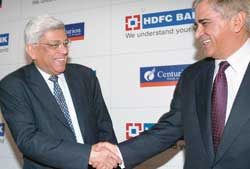 Deepak Parekh and Rana Talwar
The venue: The Centurionn Bank of Punjab (CBoP) boardroom on the ground floor of Modern Centre, in Mahalaxmi, in suburban Mumbai. It is 10:30 am on February 25. Independent joint valuers, global consultancy major Ernst & Young (E&Y) and chartered accountancy firm Dalal & Sons, are making a presentation on the valuation parameters of the bank’s proposed merger with HDFC Bank. “Make the swap ratio 1:26,” thunders 56-yearold Tejbir Singh, a Director on the 11-member board of the bank. “We are growing much faster than HDFC Bank.” Singh, who holds a minority stake in CBoP, courtesy the merger of his familypromoted Bank of Punjab with Centurion Bank in June 2005, strongly feels that the 1:30 swap ratio worked out by the valuers is unfavourable to CBoP shareholders.

Through the hour-long meeting, CBoP Chairman Rana Talwar doesn’t utter a word on the swap ratio, but Shailendra Bhandari, MD & CEO, who turned around the then sick Centurion Bank, which he joined in January 2004, comes out strongly in Singh’s support. A little debate on the issue later, the ratio is settled at 1:29. “The valuation is fair and based on share price data for the last two years and also the profitability, branches, deposits and advances of the two banks,” says an executive who was closely involved with the valuation process. A short while later, HDFC Bank Chairman Deepak Parekh and Talwar announce the country’s biggest banking merger, calling it a “win-win” for shareholders, employees and customers. The merger will be effective after it receives appovals from shareholders, RBI and the High Court.

The merger is the culmination of a search, done independent of each other, by HDFC Bank and CBoP, to find a partner who could help them capture and ride the growth in the financial services industry more optimally. More particularly, HDFC Bank, the second-largest private sector bank in the country, had been scouting for a merger opportunity that would add scale to its operations, facilitate its expansion to every nook and corner of the country, and bring on board an experienced management team that would add to its management bandwidth. CBoP provides the perfect fit in terms of culture, strategy and approach to business (See: What’s Hot, And What’s Not).

The top brass of the two banks have also developed a good chemistry. The atmosphere of bonhomie is evident at Mumbai’s Hilton Hotel, where Parekh and Talwar announce the merger. The entire top management team at CBoP is present, and beam visibly, when Parekh speaks of the talent shortage across the country and how the CBoP team will help HDFC Bank overcome it. “We are growing at over 40 per cent. To sustain this, we need massive management bandwidth,” says Parekh. CBoP has a workforce of 7,500 people, many of whom joined the bank following its takeover by the Talwar-Bhandari combine in January 2004.

Aditya Puri, Managing Director, HDFC Bank, is more blunt and makes no bones about what he thinks is his bank’s biggest gain from the merger. “We are dying for people,” he says. These statements have gone a long way towards reassuring the rank and file of CBoP, which may have been feeling a little uneasy at the prospect of merging into a bigger, stronger bank. They needn’t have been. In the past, too, HDFC Bank has successfully, and seamlessly, integrated the employees of Times Bank, which it took over in 2000, into itself.

In fact, HDFC Bank has already invited Bhandari to come on board as Executive Director. The 49-year-old Bhandari, a former Citibanker, who was part of the team that launched HDFC Bank in the mid-’90s and later, headed Prudential ICICI AMC, is expected to become a strong #2 to the 57-year-old Puri. CBoP also brings on board a top notch management team with experience in turning around a sick bank. Over time, the team at the post-merger HDFC Bank may emerge as a match for ICICI Bank’s star-studded top management team. (See: Banking on Bandwidth).table here

But Parekh’s, and Puri’s, prize catch clearly is Talwar, who was the first Asian CEO of Standard Chartered Bank. For now, he has been offered the position of Nonexecutive Director on the board of HDFC Bank, but Parekh is clear about how he plans to leverage Talwar’s experience. “We will look to Rana for guidance as and when we decide to go international,” he says. HDFC Bank has recently received a licence to operate a branch in Bahrain, and plans to mobilise $1 billion (Rs 4,000 crore) through a medium-term note issue.

Good people aren’t the only asset CBoP brings to the table. It also has a strong network of 394 branches and 452 ATMs at 180 locations. “The proposed merger will give HDFC Bank access to a wider branch network and help it expand its business geographically, especially in Kerala and Punjab, where CBoP has a good presence,”says a CRISIL report. CBoP branches are located primarily in north and south India, courtesy its acquisitions of Bank of Punjab and Lord Krishna Bank, while HDFC has a stronger presence in the West, North and South. “There is no overlapping of branches,” says Puri.

The additional reach is important as the Reserve Bank of India’s policy of going slow on granting branch licences for metro and top tier cities makes it difficult to grow fast in these lucrative catchment areas. In fact, CBoP’s branch network, plus the 350 new branch licences it received in January this year, should keep the HDFC Bank management busy for the next 2-3 years.

The combined entity will have a nationwide network of 1,148 branches on the day of the merger, giving it an advantage over ICICI Bank, which has 955 branches. “The merger will further improve the franchise and customer proposition offered by us,” says Bhandari. CBoP’s branch network will also facilitate the expansion plans of HDFC Bank subsidiaries HDFC Securities and HDB Finance, a non-banking finance company, in newer areas. “The marriage offers a strong platform for accelerated growth,” says Talwar. 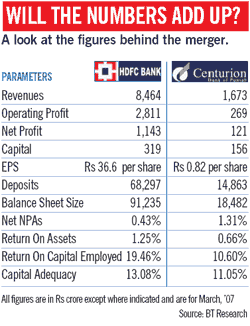 The merger will definitely lower the quality of HDFC Bank’s assets. It currently has a net NPA level of 0.43 per cent, compared to the corresponding CBoP figure of 1.31 per cent. So, even after accounting for the latter’s smaller loan portfolio, there will be some increase in the net NPA level of the postmerger HDFC Bank. Then, NPAs typically surface 2-3 years into the tenure of loans. Whether or not there are any booby traps lurking in CBoP’s retail loan portfolio will be known only in future.

On the business front, the retail sector, which has powered the impressive performance of the banking sector in the recent past, is experiencing a slowdown and banks are already feeling the pinch. And, if the US slowdown turns into a full-blown recession, it will be difficult for India to escape its impact. Under such circumstances, servicing a large balance sheet will become difficult. So, while rival ICICI Bank spreading its wings internationally, HDFC Bank top brass will get caught in managing the integration for at least a year.

But banking sector analysts say both merging banks have experience at integrating other banks into themselves—HDFC Bank acquired Times Bank while Centurion Bank successfully merged Lord Krishna Bank and Bank of Punjab with itself. This experience, and the track record of the top management of the combined bank, analysts add, mean the pluses outnumber the minuses by a wide margin. Lots of investors will be keeping their fingers crossed.