Sunny Sen
Arvind Thakur, CEO of NIIT Technologies, a mid-sized information technology, or IT, company, was in a dilemma. It was late 2008, the global economy was hurting, and one of his clients, a large international airline, wanted to renegotiate pricing. In the four years since it was spun off from NIIT, the leader in IT education, NIIT Technologies had never experienced a problem like this. Its advantage over bigger IT companies had always been low prices. But margins are margins, and Thakur couldn't cut rates any further.

His solution? "Rather than reducing prices, we offered our clients more services for the same rate," he says. How did Thakur manage this? On-site service is expensive, so he cut costs by shifting much of the work to India. He could do this because NIIT Technologies has a deep focus on the travel industry, which accounts for 32 per cent of its $238 million revenues for 2010/11. Unlike mid-sized IT companies that still behave like full-service firms, those that specialise are more profitable than their peers (see The Might of Scale). In a few years, it is the nature of a company's business that will play a bigger role in its growth, rather than overall industry performance, say experts. Vertical and geographic factors will be key. "In the long run, mid-sized IT companies will have to specialise, at least for the next phase of growth," says Sid Pai, Partner and Managing Director, TPI India, an outsourcing advisory firm. "They can't be doing everything for everyone." 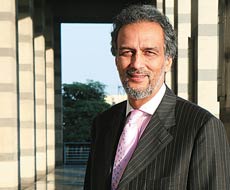 The past decade was about cost arbitrage, but today it's more about driving business value: Arvind Thakur
In 2006/07, mid-sized IT companies accounted for as much as 30 per cent of revenues in Indian IT, and the top five companies accounted for about 30-35 per cent. The remainder was from IT multinationals, or MNCs, and the captive units of other foreign companies. Since then, the equation has changed, and the share of large Indian companies and MNCs has grown. The share of the top five is unchanged, but that of mid-sized companies dropped to 20-25 per cent in 2009/10.

Earlier, companies flaunted headcount and charged for services on an hourly basis. Margins were a healthy 25-30 per cent. For mid-sized companies, this model started breaking down in the recession that followed the financial crisis of 2008. Service providers' margins faced increasing pressure, and their customers began to consolidate the number of vendors.

With clients looking for a single company that could provide a basket of services, which were earlier sourced from many vendors, mid-sized IT companies have had to change their model quickly to remain competitive. Thakur explains: "The past decade was about cost arbitrage, but this decade will be more about driving business value."

Now that the days of labour arbitrage are over for midsized IT companies, many are experimenting with ways to stay relevant in the market. That includes NIIT Technologies, which reported revenues of $238 million in 2010/11. Some, such as iGate, are acquiring companies to grow bigger. Others, such as Sonata and Polaris, are focusing on fewer industry verticals and trying to carve out a niche.

Acquiring to grow
The choice today is between rapid growth and stagnation. Some in the industry, such as Phaneesh Murthy, who quit Infosys in July 2002 and joined California-based iGate, recognised this early. In January 2011, by when iGate had become a mid-sized company with revenues of $300 million, Murthy led a buyout of the much bigger Patni Computers for $1.2 billion. This strengthened iGate's portfolio and gave it a presence in insurance and healthcare, Patni's specialities. "We're now multi-vertical and have critical mass," says Murthy. The deal helped iGate revenues cross the billion-dollar mark.

Click here to Enlarge
Patni's peers, Hexaware Technologies and Mastek have not yet moved beyond the low-cost delivery model. They are no longer the talk of the town. Meanwhile, the top five IT companies have streamlined operations and are able to dominate the cost arbitrage model. "Larger players have increased efficiency, so the competitive landscape has changed," says Amneet Singh, Vice-President, Everest Research, a global outsourcing research firm.

Building expertise
Mid-sized IT companies that lack the financial muscle to grow through acquisitions in the crowded Indian IT industry have the option of breaking away from traditional IT services and becoming specialised. This helps with prioritising management bandwidth. NIIT Technologies's Thakur points out how travel solutions account for just three to four per cent of the revenues of bigger IT companies. "What management attention will a three per cent vertical get," he asks.

At Sonata Software, too, the focus is on specialisation. In 2010, Managing Director B. Ramaswamy exited a joint venture with Tui Infotech that offered plain vanilla IT services, because it did little for Sonata's bottom line. "Competition has driven margins down, and customers want value," says Ramaswamy. "It's a paradox." Now, Sonata is focused on three verticals: travel and transport; engineering products; and infrastructure management, business intelligence and enterprise resource planning. Sonata also decided it would not depend solely on North America, as Indian IT companies typically do. Today, nearly half of Sonata's revenues of $55 million come from Europe, and it has a cash reserve of some $37 million. Ramaswamy says Sonata will use this cash to create two new verticals, on its own and through acquisitions.

Personal attention to clients will be crucial to the survival of mid-sized companies, as well. Pune-based Zensar Technologies still offers the plain vanilla services that larger IT firms do. Vice Chairman and CEO Ganesh Natarajan readily admits that giants such as Tata Consultancy Services can easily beat him on prices. But he has plans for Zensar to be more customer-focused. In November 2010, Zensar bought Akibia, an IT firm in Boston, for $66 million to get a strong presence in the US and build customer stickiness. "At the service level, you cannot be different from big companies," says Natarajan. "The company has to differentiate itself through customer satisfaction." To ensure this, he travels to the US at least four times a year to meet customers. The merger with Patni means that we are now multivertical and have more critical mass: Phaneesh Murthy
Zensar, set up in 2001, is among the youngest midsized IT companies. It reported revenues of $300 million in 2011. But Natarajan knows he must sharpen his focus. "The third phase of growth will depend on a focused strategy in micro-verticals," he says. For Zensar, a typical deal with a client would be some $7 million. Deals by larger IT firms are in the range of $75 million to $100 million. Chennai's Polaris Software realised in 2004 that differentiating its IT services was not easy. It invested $100 million to build a portfolio of IT products. Today, half its revenues come from products. It caters to the banking and financial services industries, and competes with the likes of Bancs from TCS and Finacle from Infosys. "We have 10 lines in banking," says Arun Jain, CEO of Polaris. "We're a one-stop shop for banking." Margins are healthy - products fetch 17 per cent, and services, 14 per cent.

Polaris, Zensar, NIIT Technologies, Sonata, and iGate are the bigger and better-known of the mid-sized IT companies. There are scores of others who are yet to make their mark on the industry. As Singh of Everest Research says: "Companies that differentiate will continue to be successful, either on a standalone basis or with a partner." If they fail to do so, life could get tough.