Rajat Dhariwal (middle), his brother Manuj, and wife Madhumita Halder, of Madrat Games have developed a mobile version of one of their board games, Aksharit, a Hindi version of Scrabble
Nandagopal Rajan
It's one of the most successful mobile games to come out of India. So successful that the company behind it renamed itself Bash Gaming after the hit product, Bingo Bash. The multi-player Bingo game, launched on Facebook about three years ago before it went mobile, has 24 million downloads under its belt already and expects to post revenues of $55 million this year. "We did the right thing by taking the game mobile before others thought of it. Soon it became viral and we started raking in huge revenues," says Lalit Patel, who heads the company's Indian operations out of Bangalore.

Bingo Bash may be the most successful, but it certainly isn't the only mobile game in the international market developed by Indians. The global success of the game - also popularly called Tambola - has prompted many of the country's more than 160 gaming companies to change tack and tap the global market instead of just focusing on domestic customers. India's gaming sector has been on the fringes of the international gaming market for about two decades. Until recently, it mostly focused on creating content for larger international gaming companies and rarely ventured into developing console or computer games itself because of the big bucks involved.

But with the growing popularity of smartphones, over 100 companies have cropped up to create just mobile games which they can crank out for as little as $5,000 a piece compared with more than $50 million for big console games such as Final Fantasy. Lalit Patel heads the India operations of Bash Gaming, which developed Bingo Bash, one of the most successful games to come out of India Photo: Deepak G . Pawar
Despite the rush into mobile gaming, many new entrants realise there is hardly any money to be made in the local market. Although companies do not have precise data, most say of the first 5,000-odd downloads soon after a game is released, only about 500 are from India. Real Steel by Reliance Games, a mobile game based on a film of the same name, had crossed 10 million downloads across all platforms by March and clocked gross revenues of $5 million. Of this, 46 per cent came from the US while India accounted for under one per cent. Industry experts say the pattern is the same for all games in India because of low credit card penetration and inconsistent advertising revenues. 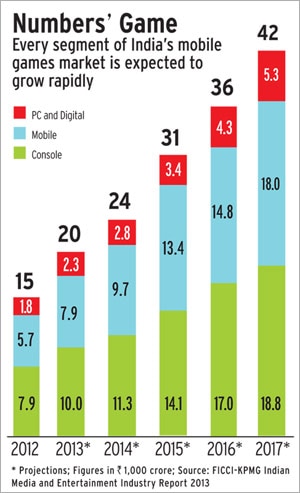 With the mega bucks in the international market, many mobile gaming companies are tweaking their business strategies and developing games with global appeal which they publish on their own. Take Bingo Bash, for example. The game has been designed primarily for customers in the US where Bingo rooms are common. Despite the game's success, the company's revenues are a drop in the ocean compared with gaming giants such as Finland-based Supercell, which rakes in over $1 million a day. And Bingo Bash is tiny compared with monster hits such as Candy Crush Saga which has an average of over 45 million monthly users.

Bash Gaming's co-founders, Sumit Gupta and Vikas Gupta, are based in California. Its US team provides crucial cultural and design inputs. Mobile gaming is still a small part of India's total gaming business. A report by industry body Federation of Indian Chambers of Commerce and Industry (FICCI) and consultancy KPMG pegs the country's total gaming industry at about Rs 15,000 crore, of which console games account for almost half (See Numbers' Game). But thanks to the growing popularity of smartphones across the world, mobile gaming is expected to jump to Rs 18,000 crore by 2017 from barely Rs 5,700 crore today. DFC Intelligence estimates the global gaming industry was worth over $70 billion in 2012.

"Though console gaming dominates the sector, given the opportunities around mobile we are seeing more interest there," says Jayont R. Sharma, Chairman and CEO of Mumbai-based Milestone Interactive Group, which has major investments in gaming. "Local content on smartphones and tablets can be big given a mass market opportunity."

A few gaming companies such as Csharks Games based in Kerala have been creating games for international clients for years. Six years and hundreds of games after founder Eldhose P. Mathew got his first e200 cheque for creating a Flash game for a German firm, he has become confident enough to reduce his dependence on the services business, and create and publish more games himself.

The company based in Kothamangalam, a small town about 60 km from Kochi, has an annual turnover of around Rs 1 crore, about 60 per cent of which still comes from games created for others. However, with at least 10 games in app stores and almost as many in various stages of development, Mathew is confident Csharks will maintain a 23-30 per cent growth rate and publish more games under its own name. Its Android game, Jewel Match, has clocked at least 50,000 downloads. "We have a game about a drunkard in a lungi trying to climb a coconut tree. There is no way such a game will become popular outside India," says Mathew. "The dilemma now is in deciding which games we should publish ourselves and which ones we should sell to clients."

Not everybody in the business faces the same dilemma. Jugul Thachery, the founder of Cha-Yo-Wo Games in Leela Infopark in Kakkanad near Kochi, is clear the company has to publish its own games in order to stay relevant in the new world of gaming. Cha-Yo-Wo has already developed popular local games such as Dark Hills of Cherai, an adventure game set in coastal Kerala which involves a journey to find a Regal Sceptre before it is overtaken by an evil magician. But that was through a large international publisher.

The company will now publish its own games under the Ruby Seven Studios banner, a company set up in San Francisco. "We have done so many good games, but there is hardly any recognition that these were our products," says Thachery, who started out with an animation company in 2000. "Three years ago, I convinced the board to develop our own IP (intellectual property) and publish the games through others. That strategy gave good revenues, but now it is time for the next stage."

With the bulk of the revenues coming from the US and Europe, developers think it is better to design games for their sensibilities. Many locally popular games are based on Bollywood movies, mythology or cricket, which do not travel beyond an Indian audience. But it is not easy to cater to a foreign market, especially because of language and cultural barriers. "We have to be careful even about the colours used. For instance, studies have shown that countries that get less sunlight prefer brighter games," says Virat Singh Khutal, CEO of Indore-based Twist Mobile. "You need to have a clear idea about the audience you are making the games for. We are building tools that will help us port games into multiple languages with ease." 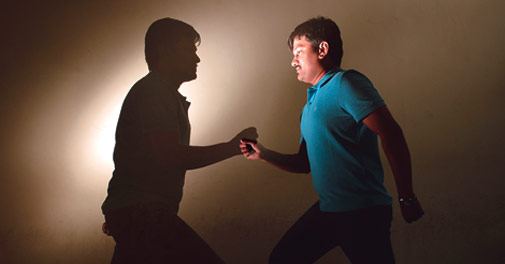 Faced with a skills shortage, Narasimha Reddy, CEO of Dumadu Games, found a way out by setting up a centre in the Philippines to do the art work for his games
His games have clocked over 125 million downloads, predominantly on the Nokia Ovi store, and generate revenues of over Rs 2 crore a year.

Some companies are going beyond the US and Europe, and tapping new Asian markets. In March, Reliance Games acquired a gaming company in Japan and bought a 51 per cent stake in another in South Korea. "These markets are not homogenous with the US market, hence we need games developed by locals for the locals," says Manish Agarwal, CEO, Reliance Entertainment Digital, which owns Reliance Games. The company first tasted global success with Real Steel and F1 2011, a video game based on the 2011 Formula One season.

One of the challenges most gaming companies face is finding people with the right technical skills. Narasimha Reddy of Bangalorebased Dumadu Games found a way around by setting up a centre with 30 people in the Philippines to develop the art work for his games.

Dumadu creates everything from cricket games to shooting-games such as Game of Death and clocks annual revenues of about $1 million, Gaming companies have become less dependent on larger publishers such as Chillingo with the Apple and Google stores opening up. To ensure a regular income stream, many companies are switching from premium or upfront payment and ad-based models to the so-called 'freemium' model. Under this model, they rope in more new players by offering games for free but charge for in-app purchases at crucial junctures. Many can make huge amounts of money from in-app purchases by a handful of players, especially in slot and casino games. These so-called "whales" could spend upwards of $100 a month. 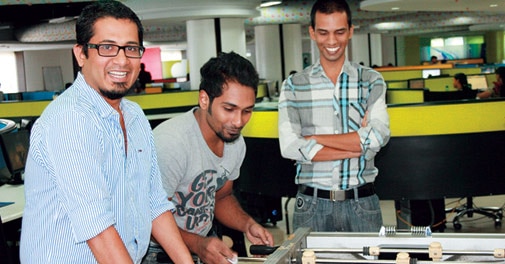 Digital Chocolate, which used to be among the world's top gaming studios before Rovio and Supercell, banks on the 'freemium' model. "Smaller players should work hard, spend some money and reach 1,000 downloads per day. Then they can collaborate with others and look for mutually beneficial cross-promotion to drive up traffic," says Bangalore-based Managing Director-APAC Dayanidhi M. Experts say many Indian gaming companies merely create copy-cat versions of global hits such as Temple Run and Parking Mania. Bangalore-based Madrat Games has adopted a different model: it has developed a mobile version of one of its board games, Aksharit, a Hindi version of Scrabble. Jehil Thakkar, head of Media and Entertainment, KPMG India, says gaming companies need to invest more on creating original content with intellectual property protection. "They need to focus on genres that have inherent appeal to Indians, make it to an international standard and take it global," he adds.

"Given the ticket size of investment needed, the size and growth of the Indian market, bets on some good creative outfits could really pay off." Some companies have already developed such games. Mumbaibased Gamiana has created Vinashi, a multi-platform strategy game set in 16th century India which involves choosing between clans such as the Mughals, Marathas and Rajputs. CEO Vishal Golia says his goal is to come out with more such immersive experiences that are global in nature, but are still uniquely Indian. But it remains to be seen if Mughal warriors are able to net as many whales as pig-hunting angry birds.