The world's largest online music store, iTunes, is yet to open shop in India, but that is not stopping 700 million-odd active mobile users here from enjoying music on their phones.

PHOTO: Vivan Mehra/www.indiatodayimages.com
Nandagopal Rajan
The world's largest online music store, iTunes , is yet to open shop in India, but that is not stopping 700 millionodd active mobile users here from enjoying music on their phones. Thanks to the Nokia Music Store and a host of apps and web radio services, mobile music is spurring the growth of digital music in the country. Access to online music is an important feature in entry- and mid-level phones, and is becoming a major revenue stream for music companies.

Adarsh Gupta, Music Business Head, Saregama, says the mobile music business could be worth around Rs 400 crore for content owners like his company. "This number is likely to increase in a big way soon," he says. "About 30 per cent of Saregama's revenue comes from mobile downloads through channels like caller tunes, mobile radio and WAP." According to KPMG's March 2012 report on the Indian media and entertainment industry Report, digital music consumption grew 24 per cent in the preceding 12 months, and about 90 per cent of that growth was from the mobile platform.

While smartphone users seem more hooked to social networking, owners of the less fancy feature phones - many in Tier 3 and Tier 4 cities - favour music, listening as they commute, work or just relax. Nokia, which has been facing the music as far as smartphones are concerned, still holds some clout in the market for phones costing below Rs 5,000. And that may be thanks to its music store and phones that have access to it. 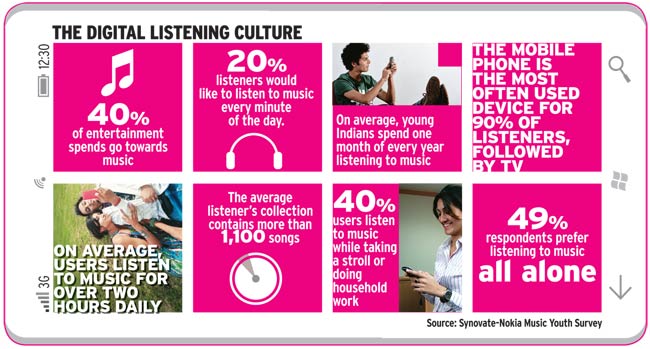 "With over 4.5 million tracks, the Nokia Music Store is the country's largest online repository of music, and caters to consumers across the length and breadth of the country," says Viral Oza, Director-Marketing, Nokia India. With over a million downloads daily, Nokia Music's popularity can also be gauged by the fact that some albums are launched on the store before other platforms. For instance, Priyanka Chopra's debut single, "In My City", was launched exclusively on the Nokia Music Store and has been at the top of the charts since, and Telugu blockbuster "Life is Beautiful" was downloaded more than 35,000 times within four days of its release. Incidentally, in 2011, Nokia Music stopped services in 27 countries due to lack of interest. But India seems to be a different story altogether.

Devraj Sanyal, Managing Director at Universal Music India and SAARC, says there are two reasons for the growth of mobile music. "Consumers prefer consuming music in digital formats as its virtual form doesn't necessitate carrying a physical CD," he says. "Also, digital formats allow users to create their own playlists from various albums and that makes the digital proposition very compelling for the consumer. In India's piracy-led music ecosystem, this is the best and safest play for us."

Nokia has tied up with a range of music companies and labels in what it calls a "mutually beneficial" partnership. "While they enable us to take the latest music to our consumers, on the other hand our partners receive the chance to market their songs to the largest mobile music enabled audience in the world," says Oza.

This opportunity is not lost to the music companies. Universal Music's Sanyal says his company works directly with all telecom companies in India, and has commercial agreements with them. "With new regulations being implemented, telcos are looking at introducing pull-based innovative music services and we are one of the few labels who have launched such services."

The proliferation of cheap mobiles is opening up new avenues for artists. "Mobile and other online platforms open us up to fans who might not have been able to attend our shows or buy our CDs," says Rajarshi Sanyal, lead guitarist of the Delhi band Faridkot, whose album Ek has been on Nokia Music since 2010.

Abhishek Mathur, lead guitarist of Advaita, says mobile music is the future of the listening culture. But, he adds, the model for independent music is still nascent in terms of marketing and reach. "Advaita has had mixed results by being associated with Nokia Music. Our first album did well, and EMI showed us good figures for track and album sales through the portal. The second album, however, is just picking up steam."

Nokia's major competitor, Samsung, has its Music Hub, but access is limited to users of its Galaxy SIII smartphone. The robust app environment on Android and iOS phones brings music to other users in a big way. "Applications and valueadded services open up a plethora of options for music," says Annie Mathew, Head of Alliances, Research In Motion, India. "They become a means to earn revenue and reach out to consumers for music labels who work to promote anti-piracy." She adds that this trend is likely to keep growing, and that the app platform is likely to "grow exponentially".

Apps such as Hungama and Dhingana are popular, as they allow users to listen to online radio or songs of their choice for free. However, only the Android app from Flyte, Flipkart's digital music store, lets you buy and download music directly to your phone. Apps such as Shazam and Aweditorium, too, have in-app purchase models, but they are not very popular in India.

Naveen Bhandari, Director of Techzone, one of the largest players in value-added services with a presence in over 30 countries, says that on average, around 70 per cent of total music revenues and 50 per cent of downloads come from mobile phones and streaming. "When it comes to mobiles, movie music constitutes the majority of downloads in India," says Bhandari. "Bollywood contributes the most, followed by Tamil and Telugu. When we tried promoting international music recently, we got a good response not only from regions such as Mumbai, the Northeast and Bangalore, but also from completely unexpected regions such as Bihar and Kerala."

Bhandari says this category could see major changes in the future, as the focus shifts from individual downloads to an "online mobile storebased model" and the availability of products across platforms for a more wholesome consumer experience.

So the future of mobile music seems bright. "Music is life to people," says Saregama's Gupta. "And downloading it on the phone is the easiest way to get music on the move."