More and more Indians are downloading music legally, and companies are raking it in.

In the next five years, we will be a piracy-free country: Devraj Sanyal <em>Deepak G Pawar</em>
Goutam Das
When he's performing, Devraj Sanyal, lead vocalist of heavy metal band, Brahma, is a different animal. On a Friday evening, as he gets set to rock Opus, a popular Bangalore nightspot, Sanyal turns out in pink, crimson, yellow and orange striped harem pants with a black tee. During the week, however, he is every inch the businessman.

Always attired in a grey or black suit, he is the picture of sartorial elegance each morning when he walks into the Mumbai office of Universal Music Group, the world's largest music content company. Sanyal runs Universal's music label and music publishing business in India, Pakistan, Bangladesh, Sri Lanka and Nepal. These are markets where music piracy has been killing the industry slowly, eroding its revenues every year. On the digital consumption front, the industry is losing Rs 4,650 crore a year just to online and mobile piracy, according to Indian Music Industry (IMI), a consortium of 142 music companies.

But there is hope on the horizon and Sanyal is predicting the death of piracy. "In the next five years, we will be a piracy-free country," he says, adding that more and more people have begun buying music legitimately. " The legal system is getting solid. We are set to squash piracy with all our might." 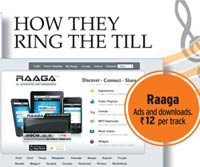 Click here to Enlarge
Earlier this year, IMI obtained orders from the Calcutta High Court directing 387 internet service providers to block 104 music copyright infringing websites. The development corresponds with the mushrooming of music streaming sites and sites that offer legal downloads, some for as little as Rs 6 per track. Internet streaming is a delivery method where audio/video is transmitted in a continuous stream to a user but cannot be stored.

Today, there are 17 digital music stores licensing tracks and albums from music companies and streaming them or allowing online downloads in India. These include Flipkart's Flyte, Gaana, Raaga, Dhingana, Saavn and Hungama. Nokia handset users can access Nokia Music Unlimited, a service that currently has over 4.5 million legal, digital soundtracks. Together, they can perhaps do what Spotify did in Europe. The Swedish online music service, with 10 million registered users and three million paying users, has made a huge dent in piracy on the continent. The International Federation of the Phonographic Industry recently reported that online music subscriptions have picked up well in Scandinavia. For instance, in Sweden, subscriptions accounted for 84 per cent of digital revenues in the first 10 months of 2011.

"The potential of legal downloads has become visible to everybody in the industry," says Madhusudhan Ranganathan, head of the digital business at Indian music label, Saregama. "While piracy is still the biggest challenge, customers are now getting wider access to content at the right prices from legal download and streaming sites." Saregama has the largest Indian music catalogue in India and is the biggest victim of piracy. The numbers touted by legitimate online music service providers indicate that a growing number of users are willing to buy music. Flipkart, which launched Flyte in February this year, reported 100,000 downloads in the first two weeks after launch. Flyte charges between Rs 6 and Rs 15 per track.

Besides its own digital store, where users can download songs for Rs 10 onwards, Hungama also runs a cobranded service with the state-owned Bharat Sanchar Nigam Ltd (BSNL). Broadband users of BSNL have unlimited access to Hungama's collection for Rs 149 a month. "When we started this service 12 months back, on an average, a subscriber was downloading 21 pieces of content per month. It has now grown to 44," says Siddhartha Roy, COO of Consumer Business and Allied Services at Hungama. "This means the consumer is getting far more comfortable buying legal services. There is acceptance, and habit formation is happening."

A spokesperson for Nokia Music said the service is seeing downloads of four songs per second. Raaga has seven million unique users and Dhingana about 3.5 million "uniques" a month. In the online world, a "unique" is a single visitor to a website and the metric is widely followed by advertisers.

Advertisements are becoming a key monetisation model, particularly for streaming services. The other two prevalent models are subscriptions and 'freemium', a mix of free and paid premium services.

Dhingana, founded in 2007 by US-based twins, Snehal and Swapnil Shinde, has a freemium model. Its streaming service is free and is supported by advertisements. Dhingana is now launching a subscription model. Similarly, Raaga's streaming service is free and supported by advertisements. Downloads are priced at Rs 12 per track and the firm is also working on a premium monthly subscription model.

Most of these services are not profitable today but see a pot of gold a few years on. On the cost front, streaming and download companies have to pay a huge licensing fee to access music catalogues. The average licensing fee paid to a music label can be upwards of Rs 50 lakh a year, depending on the size of the catalogue, say two executives who did not want to be identified. Some companies, including Saregama, have recently spiked their valuations. Online music service companies can therefore only make money when large numbers of users download tracks and albums.

There are international successes indicating the scope and scale this industry can achieve. Pandora, a listed internet radio service company in the US, reported that its revenues had grown 99 per cent to $274.3 million in fiscal year 2012, ended January. In 2013, the firm sees revenues ranging between $410 million and $420 million. The company is not profitable but analysts see it reporting positive EBITDA (earnings before interest, tax, depreciation and amortisation) in 2014.

"India is a very large consuming market. We hope to see a hockey stick curve (a dramatic increase) happen in broadband and the web as well," says Hungama's Roy. "We are at 100 million internet users. Over the next twothree years, that can go up to over 350-400 million." That is good news for the industry. Indeed, it is good news for every web-based service provider.