Download the latest issue of Business Today Magazine just for Rs.49
DOWNLOAD
News
Magazine
Features
Why multinationals are increasing stakes in their Indian units, which could be the first step to delisting from the bourses.

Why multinationals are increasing stakes in their Indian units, which could be the first step to delisting from the bourses.

Experts say some of these acquisitions could be part of a long-term strategy to eventually go private in India and could be the first step to delisting from the bourses. Indian market regulations allow promoters to initiate the process of delisting if they have 75 per cent stake.

K.R. Balasubramanyam
The mother of all buybacks by a multinational company (MNC) began on June 22 when consumer goods behemoth Unilever Plc started its Rs 29,200-crore open offer to raise its stake in its Indian arm, Hindustan Unilever, from 52.5 per cent to 75 per cent . Before this, the biggest such raising of stake by a global corporation in its Indian unit was that of UK-based health-care giant GlaxoSmithKline Plc in January, when it acquired a 29 per cent additional stake for about Rs 4,800 crore, raising its holding to 72.5 per cent. And a little over a year ago, US media conglomerate Walt Disney Co bought out its Indian partner, UTV Software Communications, in a deal worth about Rs 2,000 crore before delisting it from local exchanges. In the last five years, there have been a number of other instances as well of MNC s snapping up shares from the open market, and increasing their stake in whatever small proportion possible, in their Indian entities.

Why are so many MNCs increasing the promoters' stake in their Indian units? Experts say some of these acquisitions - as the Walt Disney one showed - could be part of a long-term strategy to eventually go private in India. Indian market regulations allow promoters to initiate the process of delisting if they have 75 per cent stake. They can quit the bourses once this reaches a minimum of 90 per cent. "If an MNC wants to take its subsidiary private, it is keeping in mind many advantages. It can manage growth much more efficiently without worrying about minority investors' interest, apart from having to disclose minimum information about its operations in the country," says V. Balakrishnan, a member of the Infosys board. Going private also allows flexibility in transfer pricing, royalty payments to the parent and product pricing in related party transactions. "Once delisted, the parent company can source products from its Indian subsidiary by paying just a small margin above the cost price rather than market-driven prices," says Vivek Mallya, a chartered accountant who was formerly a partner at audit and consulting firm PwC India. "It can then sell these products at an attractive premium in global markets. Such foreign companies will be able to treat India as a low-cost and low-margin destination." Since this would lower the Indian subsidiary's earnings, he points out, it would also lead to lower corporate tax collections for the government.

Many MNCs are sitting on huge cash reserves or have access to cheap global credit. It makes sense for them to use this to hike their holding in their Indian subsidiaries, notes Pankaj Pandey, Head of Research at brokerage firm ICICIdirect.com. "The yield on investment in the Indian business of an MNC is likely to increase with better growth and higher dividend payout ratios if the parent company increases its holding," he adds.

Stake increases by multinationals gathered pace since June 2010 when the Securities and Exchange Board of India (SEBI) changed some guidelines. The new ones required the listed private sector firms to have a minimum public shareholding of 25 per cent. It set a deadline of June 3 this year. But many companies, including MNCs, have still to increase their public shareholding to that level. Instead, at least two MNCs, Fresenius Kabi Oncology Ltd, promoted by Fresenius Kabi (Singapore) Pte Ltd, and Fairfield Atlas, the Indian subsidiary of TH Licensing Inc, have started the delisting exercise.

Last October, Fresenius Kabi Oncology reduced its promoter stake from 90 to 81 per cent, which suggested it was moving towards meeting the SEBI norm. But instead of lowering it any further, it has announced its intention to delist. So too TH Licensing, which owns 83.91 per cent of Fairfield Atlas, has said it wants to quit Indian exchanges. The two companies have a market cap of around Rs 2,600 crore.

But delisting is not an easy job. To buy out minority shareholders, companies have to follow a price discovery process through reverse book building. In late-June, the SEBI announced a number of fresh guidelines, which have further tightened the buyback process. The companies engaging in the exercise must, for instance, buy back at least 50 per cent of the stake they had earmarked. The maximum buy-back period has now been reduced to six months from one year. The companies have been barred from making another buyback offer within a period of one year from the date of closure of the preceding offer.

Industry watchers note that many MNCs listed on Indian bourses only under duress. In the 1970s, the Foreign Exchange Regulation Act (FERA) capped foreign direct investment at 40 per cent, which meant MNCs had to raise the remainder from the Indian public. The majority complied, though a few led by Coca Cola and IBM, preferred to close down their Indian operations. Nandy of Thomas Cook says his company would never have listed had it not been for the FERA  restrictions. Once the cap on foreign holding was lifted following liberalisation in the early 1990s, a number of foreign companies such as Cadbury India, Carrier India and Otis India, increased their parents' holding by buying out other shareholders, and delisted. " IBM and Coca Cola returned only after the earlier conditions were relaxed," says Shriram Subramanian, Managing Director at InGovern Research Services, India's first proxy advisory firm.

There are two ways in which the Indian subsidiaries of MNCs can repatriate profits to global parents - in the form of dividend, as they do to all shareholders, or by returning part of the equity invested by the parent through share buyback. Every year, an Indian subsidiary can retire 25 per cent of outstanding equity by paying back the parent company, and the shares thus bought cease to exist. 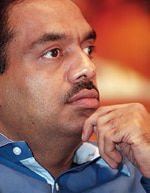 By going private, an MNC can manage growth much more efficiently without worrying about minority investors' interest: V. Balakrishnan
Does it matter to the stock market if substantial numbers of MNCs move out? It does. There are around 150 MNCs listed on the Bombay Stock Exchange (BSE), with a combined market cap of Rs 6.43 lakh crore, or 10 per cent of the total market cap of all BSE listed companies. Investment experts say delisting of foreign companies could lead to market volatility because MNC stocks lift local exchanges. The performance of the CNX MNC index on the National Stock Exchange is an indication - in the two years up to May 31, the MNC index grew 16.4 per cent while the Nifty rose just 7.8 percent. "There will be a scarcity of stocks of good MNCs in the market. When an MNC buys out shares, Indian investors lose out on an opportunity to invest to that extent," adds ICICI direct.com's Pandey. "Exchanges will be left with Indian companies, which have huge capital requirements. That is when you could see sharp volatility in the market."

The presence of MNCs adds depth to Indian markets. "It is high time the powers-that-be looked at the reasons why MNCs are hinting at delisting their shares at the earliest opportunity and no new listing of marquee international names has happened in the recent past," says Mallya.