You may never have heard of Mysore Paints & Varnish, but the company's ink has made its mark at polls in India and elsewhere. In India, the ink is used for elections all the way from Parliament down to municipalities, cooperative institutions, and organisations that, by law, require elections.

This year, we hope to see our revenues almost double to about Rs 40 crore: M.V. Hemanth Kumar, Managing Director <em>Photo: Nilotpal Baruah/www.indiatodayimages.com</em>
K.R. Balasubramanyam
When East Timor, a tiny half-island nation in Sout-heast Asia, held its parliamentary elections last year, a small public-sector company in Karnataka left its mark on every voter. As polling day approached, East Timorese officials began shopping for indelible ink. They zeroed in on a non-descript factory in Mysore, Karnataka. They placed an order, and Mysore Paints and Varnish Ltd delivered 3,000 bottles in just under a week.

The company does not always work at such breakneck speed. For Indian elections, it gets orders well in advance, and has already shipped supplies for assembly elections coming up in Chhattisgarh, Madhya Pradesh, Mizoram, Rajasthan and Delhi. Its next big thing is, of course, the Lok Sabha elections in 2014.

"Not a year goes by without elections in some place or the other," says M.V. Hemanth Kumar, Managing Director at the 76-year-old company set up by the ruler of the erstwhile Mysore State. The company, now run by the Karnataka government, is the only one in the country that makes the indelible ink that most voters consider a mark of pride.

The company started out with decorative paints, and entered the ink business in 1962 at the request of the Election Commission. In India, the ink is used for elections all the way from Parliament down to municipalities, cooperative institutions, and organisations that, by law, require elections. The ink is not sold to the public. "We provide it to only those who have a legal and genuine need for it," says Hemanth Kumar. "We don't market the ink as we market industrial coatings, decorative coatings, and primers." Besides elections, the ink is used in Pulse Polio campaigns, and in some hospitals to mark cancer-affected areas of the body.

The ink, which is violet in the bottle, turns black when dabbed on a finger, and stays that way for almost a month. Company officials say it cannot be erased. "When the stain disappears depends on the temperature of the individual's body and environmental conditions," says C. Hara Kumar, General Manager (Marketing).

He says the company has got no complaints so far, thanks to stringent quality control. "Since the ink is photosensitive, it reappears if someone tries to erase it." This photosensitivity is also the reason why it is stored in amber-coloured bottles and guarded from exposure to direct sunlight.

So what goes into the ink? "That is a secret," says Managing Director Hemanth Kumar with a smile. The main raw materials are rectified spirit and silver, so the price of silver has a direct bearing on the price of the ink. The company sources all raw materials within India. The chemical composition, developed by the National Physical Laboratory, is closely guarded.

In 1979, the company switched from glass bottles - or phials, as they are called - to plastic ones. Since then, losses due to leaks and breakage has fallen from 15 per cent to one per cent now.

The company usually sells the ink in 10 ml phials that cost Rs 183 apiece. One phial is enough for about 700 people. In the current season, the biggest order of 120,000 phials has come from Madhya Pradesh, and the smallest, of 40,000 phials, is from Delhi.

The company regularly exports ink to several democracies. Countries buy ink either through a global tender, or through their embassies in India, or with the help of United Nations agencies. "Earlier, making the ink was a once-in-five-years affair, but after elections became mandatory for local bodies, and exports picked up, it is now a regular activity," says K.S. Muralidhar, a veteran at the company who retired recently as Manager (Materials).

The ink made headlines in the international media in October 2004, when some reports alleged that it was not indelible in Afghanistan, and helped some people there to vote more than once. The company, however, had denied that it was at fault. "We were not at fault," says marketing manager Hara Kumar. "Instead of using the pen meant for indelible ink, they used general marker pens. They have admitted their mistake." That was the first time Mysore Paints had made indelible markers, at the request of the UN, which supervised the Afghan elections.

In India, the ink is dabbed on with a stick, but it is applied differently elsewhere. In Cambodia and the Maldives, voters dip a finger into the ink. In Burkina Faso and Burundi, the ink is applied with a brush. The Turks apply it with nozzles, and the Afghans, with pens. "We supply the ink according to customer specifications," says Hara Kumar. Last year, the company earned Rs 4 crore from ink exports.

As the name suggests, Mysore Paints also makes decorative coating, industrial paint and wood polish. However, the ink business has overshadowed the paint business. It earned Rs 21 crore in revenue last year, and made a profit of Rs 1.5 crore, and sixty per cent of the revenue came from ink, whose demand has been rising 10 to 20 per cent with every general election. "This year we hope to see our revenues almost double to about Rs 40 crore," says Hemanth Kumar. 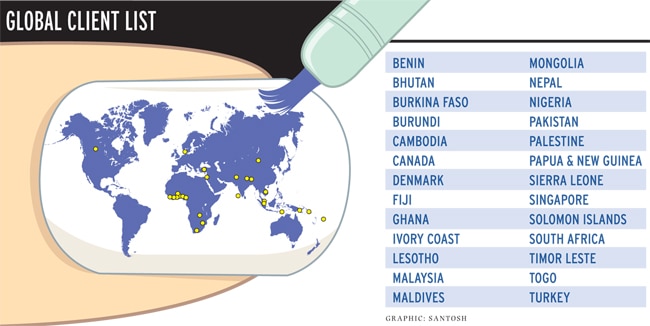 The Karnataka Government holds a 91.39 per cent stake in the 65-employee company. The remainder is owned by about 1,000 shareholders, including Srikantadatta Narasimharaja Wadiyar, scion of the royal family of Mysore. Profitable since 1991, the company is listed on the Bangalore Stock Exchange, though its shares are not traded.

As for next year's Lok Sabha elections, the company needs 60 working days to meet the demand. Once orders are in, four-hour overtime shifts will be introduced. The orders are not placed directly by the Election Commission, but by its offices in various states.

In the 2004 general elections, the company supplied 1.7 million phials of 5 ml each, but had to increase the supply to two million in 2009, because the Election Commission changed the marking style from a dot on the finger to a short line across the fingernail and skin. The order for next year's general elections is estimated at around 2.2 million phials of 10 ml each, worth around Rs 31 crore.