Nissan's grand India plans are out of tune with ground realities

The company's India target is audacious. Nissan wants to raise its market share from 1.5 pc in 2012/13 to 10 pc by 2016/17. For this, it must double its market share every year for the next four years in a market that is crowded with entrenched and aggressive rivals such as Maruti Suzuki and Hyundai.

<em>Photographs By</em> H . K . RAJASHEKAR
N. Madhavan
Two years ago, Carlos Ghosn, President and CEO of Nissan Motor Co, announced a six-year plan called Nissan Power 88 to accelerate the company's growth worldwide. He called it "the roadmap for our profitable growth" that would "deliver the full potential of the company". Nissan, Japan's second largest car maker, was emerging strong from the 2008/09 financial crisis, and the aim of Nissan Power 88 was to raise the global market share to eight per cent (it is 6.2 per cent at present) and operating profit margin to eight per cent as well by 2016/17 (six per cent at present).

To achieve these goals, the Yokohama-based company is banking on strong performance in emerging markets such as India. "India has a strategic role in the success of Nissan Power 88, as it is a key growth market for us," says Toshiyuki Shiga, Chief Operating Officer, Nissan Motor. But many in the industry say the company's India target is audacious. Nissan wants to raise its market share from 1.5 per cent in 2012/13 to 10 per cent by 2016/17. In other words, it must double its market share every year for the next four years in a market that is crowded with entrenched and aggressive rivals such as Maruti Suzuki and Hyundai. And Nissan's performance since it launched the Micra, a compact car, in mid-2010 inspires little confidence that it can pull it off. All that Takayuki Ishida, Managing Director and CEO of Nissan Motor India until recently (he was replaced in April 2013 by Kenichiro Yomura, the fourth CEO in five years), says when asked about the target is that "we must achieve it". But the company failed to achieve its 2012/13 domestic sales target of 50,000 units.

Besides the Micra, the company makes the Sunny, a sedan, and Evalia, a multi-purpose vehicle, at its plant in Oragadam near Chennai. The plant is a joint venture with Renault. In 2012/13 Nissan produced 138,549 cars here, but sold 36,955 units in the domestic market. Exports far exceeded domestic sales at 98,971 units. At 23,998 units, Sunnys outsold Micras (11,449 units). The remainder is accounted for by sales of cars such as the Evalia and the Teana. Micra sales fell 38 per cent in 2012/13 compared to the previous year, although the compact car segment declined by only seven per cent.

"Sunny is a car which is as luxurious as a car in its next class, and that value proposition was clearly established," says Nitish Tipnis, Director - Marketing and Sales at Hover Automotive, Nissan's master franchisee in India, explaining why the car gained acceptance in India.

But the Micra, he says, is different. "Apart from various other features, it has the lowest cost of ownership. But this attribute was not communicated properly to the consumers," he says. The company is planning a new variant of the compact car soon.

"India is a highly competitive market with demanding customers, so any player entering the market late must offer a value proposition which is different from cars that are already there," Abdul Majeed, Partner and Leader - Automotive Practice, PWC. "A clear distribution strategy is absolutely necessary," Micra failed on all counts, he adds.

Nissan's challenges in India are not confined to products. Some of its innovations did not work. While all other car makers in the country set up their own dealer network, Nissan chose to appoint Hover Automotive as its master franchisee. Hover takes care of dealer development, dealer support and operations, car distribution, and marketing. Basically, it handles Nissan's entire front-end operation.

"As we were a late starter, we appointed a master franchisee," says Ishida. "The assumption here is that they have the local knowledge to roll out dealerships faster than us. This strategy was in line with our core growth philosophy of partnership." In three years Nissan set up 95 dealers in 14 states, covering 68 per cent of the Indian market. "Car makers who came in earlier took 10 years to reach this coverage," says Hover's Tipnis. But the move created unexpected problems. In December last year, dealers formed the Nissan Dealers Forum, and refused to take delivery of the newly launched Evalia. "When organisations are trying to cut middlemen, Nissan added a layer called master franchisee," says a dealer who recently gave up the Nissan dealership. "This ate into the already wafer-thin dealer margins. Also, poor domestic sales meant that dealers who had invested a lot of money could not see revenues from service and spare parts business. Many were staring at big losses." Several dealers felt that the master franchisee did not give them due respect, and that this was reflected in communication.

"We have understood the issues raised by the dealers," says Tipnis, who maintains that dealers' margins are not reduced because of a master franchisee. Nissan now holds dealer meetings every two months, but the fact is that dealer unrest has affected its sales and customer service.

The company's other experiment was cross-badging - selling the same car under different brand names - as part of the Renault-Nissan alliance strategy (see case study titled "Why Cross-badging Does Not Work in India" at www.businesstoday.in/casestudy-crossbadging). The Micra is cross-badged and sold as the Renault Pulse, and the Sunny is also sold as the Scala. This confused consumers, and sales of both brands fell.

One innovation worked, however - the decision to set up the joint venture plant. Together, Renault and Nissan have invested Rs 4,500 crore in the Oragadam plant, and share the facility in a 30:70 ratio. All Renault and Nissan cars sold in India are made here. "The joint venture plant ensured that the investment, productivity and best practices are shared," says Toshihiko Sano, CEO and Managing Director of Renault Nissan Automotive India Pvt Ltd. "There are economies of scale, and market conditions are better managed."

The plant has a strong local supplier base and has attained global quality levels, he adds, pointing to strong exports as proof. Exports in the last two years exceeded 200,000 cars, making Nissan the third largest exporter from India after Hyundai and Maruti Suzuki. Over 200 variants of Nissan cars go to more than 90 countries. The India plant has replaced Japan as the hub to export the Micra to Europe, which helps the parent company leverage India's low manufacturing cost and save on adverse yen fluctuations against the US dollar.

Nissan Motor India has drawn up a strategy to meet the Nissan Power 88 targets. It plans to triple its dealerships to 300 by 2016/17, launch 10 new models in that period including the all-new Datsun, an entry-level compact car priced below Rs 4 lakh. A team of 2,000 engineers is working on the car at the company's research and development centre near Chennai. Nissan will soon cross-badge the highly successful Renault Duster as its own product. There are plans to expand capacity as well. 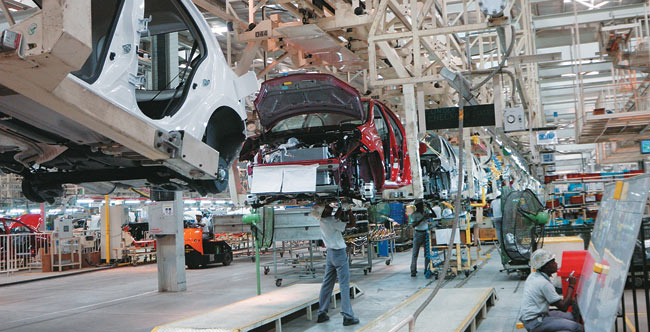 The Rs 4,500 crore Nissan-Renault joint venture plant at Oragadam near Chennai, which makes all the Nissan and Renault cars sold in India
But no one is willing to bet that Nissan will have a 10 per cent market share in four years because of these efforts. Nissan Power 88, it appears, has to succeed without India's contribution. However, the strong manufacturing footprint that the company has set up will lay the foundation for Nissan's future in India. Toru Hasegawa, Nissan Motor's Corporate Vice President for Africa, the Middle East and India, says: "We are in India for the long run, and getting the production right is the key."